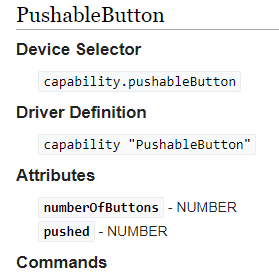 The button capability has been deprecated. I can't take a look at it at the moment but if nobody else gets to it soon I can look at it later tonight.

Thought that looked different. I'm on phone so only made the easy changes.

I take no credit for knowing this....just for regurgitating what I have picked up from all the smart folks on here.

If I hadn't screwed it up on a driver too I wouldn't have known it either.

I have been playing around with a button controller which is why it looked different but if you hadn't said anything I wouldn't have known. I'll take a look tomorrow and see if I can covert the rest unless someone with some proper intelligence gets there first

Now I get a different error when I try to save the device driver.

I am good at tinkering with the hardware devices and not to good at coding. Do you mind telling me where I need to make the code changes in the Github code?

Here is the guide to Hubitat’s Button implementation

Sent you a pull request on github.

Thank you for the help. I will test it tonight when I get back on my hub.

Now I get a different error when I try to save the device driver.

Yeah I hadn't finished the changes at the time it was late so ran out of time. Looks like @Ryan780 has done it now?

Thank you @BorrisTheCat & @Ryan780 for your help. I will try this DH in a few hours. Still at my desk.
My RDP to my home is acting up and keeps disconnecting.

The DH was accepted by Hubitat. Will test in the morning.

The DH is working. I am able to setup the RuleMachine to push notifications for my Front Doorbell and my Deck Doorbell. Thank you both for your help. I will keep the DH on the Github for anyone else who needs a copy.

Great to hear!! Glad I could help.

I did some work on the driver from the OP. Someone else, that I can't seem to find to give proper credit, converted it to HE. I just added parameters to save custom names for each contact for logging purposes.

This file has been truncated. show original
1 Like
[RELEASE] HubConnect - Share Devices across Multiple Hubs (even SmartThings!)
trunzoc November 24, 2019, 5:59am #18

Thanks @HAL9000 , I moved it to a properly named directory. You can remove yours.

Thank you for updating the DH code. I updated the original GitHub link.

I'd like to thank @lmosenk and all the devs here: the driver contained in the latest HE firmware didn't work for me, this one does, and it's also more configurable.

I spent 3 days trying to make the sensor work, but the problem was not the cabling or the sensor, it was the driver. As soon as I changed to this one, it worked immediately and flawlessly. Finally my Aeotec Siren 6 is doing its job. I completely replaced my old traditional doorbell and its old chime, with a new videodoorbell and the Aeotec Siren 6. HE is doing its magic.

I'll tag @mike.maxwell to let him know about this, maybe he can take a look at the official driver and this one.

Thank you so much!

the device and driver worked as intended when I built and tested it, so without a lot more info as to what didn't work, there's not much for me to go on here...

I read other users complaining that the default driver didn't work (@steve.maddigan):

Hooking doorbell button to HE without doorbell chimes Support

Yup, that’s what I was going to say. Added in the latest release. I am not sure if the driver was auto selected when I originally paired or not. But switching back and forth between the drivers (and hitting configure after) it does not work with the built in driver and only with the 3rd party driver I mentioned. No idea why.

What happens is that after the factory reset and the pairing, the first couple of rings were intercepted, then it stopped catching other ring events. I tried removing and inserting the battery from the sensor, but it still didn't work. If I factory reset and pair it again, it does the same thing, it works at the beginning, then it stops working.

What I noticed is that when it stops working these State Variables are shown under the device page. When it works they are not present. Also, I didn't understand what the "Configure" button does there.

Yup it is true.

I didn’t install the sage doorbell until it was supported with in HE but I had purchased it based on this thread so I knew alternate drivers were out there.

I wasn’t sure if it was my wiring or not. I have a pretty old gear driven four chime door bell and I had to add a cct to pulse stretch the doorbell press so initially I thought it was my fault.

Connecting it directly to the transformer would get it working and by the time I reconnected it to the doorbell it would work once then nothing. I mean how hard can this wiring be?? It’s a doorbell !!

Anyway, tried the other driver and bingo.

Tried the built in driver again, hit config, worked a couple of times and nothing.

Went back to the other drive and we were good to go. I never looked back.

One of my biggest gripes with the internal apps and drivers is you don’t have any visibility. I’m not opening the can of worms again but just saying.

Same reason why I do not use HSM for my leak sensors. It don’t work after being disarmed once so I wrote my own rule to handle them.

Some day I will figure out how to write apps but that hasn’t happened yet.