We’re planning and pricing out a smallish pool for our yard,

Anyone have a setup that is fully integrated with Hubitat?

It’s not far from the house but all our outdoor lighting will be Hue so their will be a lot of zigbee devices in the yard already.

I'm not using rgb lighting. Just some white x-mas lights around the deck and one of these in the pool return.

More info in the link below. My pool heater is natural gas BTW.

I have it attached to the backside of the ladder. I'll try to take a pic the next time I'm out there. I just used a piece of waterproof gorilla tape to attach it. [ink (1)] I put the sonoff in a waterproof box and used an extension cable to run the sensor over to the pool ladder. The swich part of the sonoff goes to the heater. [20200602_112407] The Tp Link dual outdoor plug powers the interior pool light and the pool deck lights. And the Aeotec runs the pump [20200602_112414]

And I’ve spliced out the Magic Home controller for a GLEDOPTO LED controller connected to Phillips Hue.

It’s hard to find something similar without getting a little hacky.

They’re mounted on the top rails of my above ground shinning in. 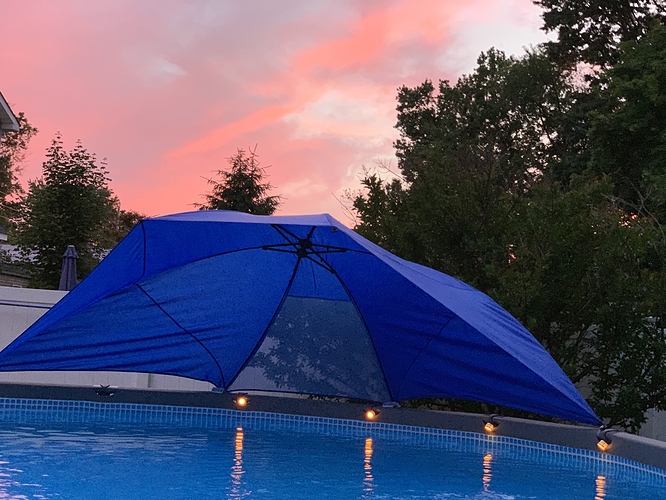 Nice, but I want something that can actually go underwater as well.

These say they can be immersed but I wouldn't trust them.
Water is a cruel mistress, I wouldn't expect to submerge anything and expect it to live more than a few months even if it says it's waterproof.
Unless it's extremely expensive and designed by Elon.

Ip67 rating is only for temporary shallow immersion.

They are excellent. It's really important to get lamps that are resin filled otherwise they will leak and get ruined. These come with a nice little remote (1 per lamp, but 1 unit will drive multiple lamps as long as you are not too far away from all the devices). I haven't rigged them up with a smart controller. I just use a smart switch to activate them on/off. I'm really pleased with them.

Look nice, seems like they are like many other pool lights where the color controls are baked in, rather than allowing you to choose specific colors or scenes with fine grain color control (like Hue) It seems like the pool industry is pretty far behind everything else. I wonder why no one has a system like those for LED strip lights where there is a separate Controller/Driver not embedded in the light itself, that could be located above water.

Yes, they have preset colors and combinations/sequences. I did consider getting others and setting up controllers (there are articles online I found) but in the end it was too much hassle and I have limited space in the junction boxes above the lamps to house the controllers and run the necessary wires. Happy enough anyway

The bulb burned out in my AquaLuminator light last season. I took the bulb housing apart and replaced the halogen bulb with an led bulb. It takes a MR16 bulb. I thought about replacing it with something like this
https://www.amazon.com/Gledopto-Voltage-Spotlight-Supported-Compatible/dp/B07T2Z2T8L

But I didn't think it was going to be nearly bright enough.

Personally I like just the bright white light in the pool. I had the different colored lenses for the light but didn't like the way they looked and we never really used them.

As far as a setup that's fully integrated with hubitat, I don't think that really exists.

I know Hayward has their omnilogic system that can control lighting, pump speed, temps, valves, water features, chemical balancing, salt systems....basically everything you're looking for. They do have an api as well so in theory it could be made to integrate with home automation platforms. The downside is, they require you to sign an NDA for the api details. There's a small group on HA working on an integration for it, and Hayward seems to be OK with releasing the integration when it's ready as long as they don't share the api.

Not sure if there'd be enough interest for the same thing to happen with HE, but I'm sure there's a number of pool owners here in the community and most likely have at least 1 piece of hayward equipment so it's possible.

I installed a Jandy Aqualink RS system connected to all of my equipment. Gave me discrete control via many forms of user interface. I then installed/integrated a Raspberry PI with AqualinkD and MQTT service, to provide external control to that Jandy system. In Hubitat, I use an MQTT client to integrate to the RPi MQTT service, for Hubitat integration and control. Its working pretty much rock solid.

I would love to use my OmniLogic with my Hubitat. The functions on OmniLogic are very very basic. Need more control. Anxiously waiting to hear if something is working already.