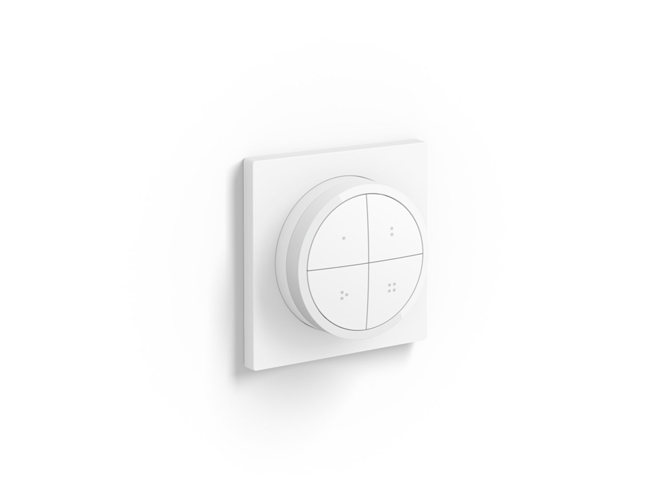 Signify released this today for the Hue system. 4 buttons to target zones then a dial to control dimming. I'm planning on getting 1 for my hall/landing lights but was thinking that this would make a great Sonos controller. Buttons for Play/Pause, Skip, Prev, etc and the dial for volume.

Fingers crossed its ZigBee and can be paired directly to Hubitat.

All existing Hue stuff is Zigbee, I can't imagine this being any different.

It's probably a little premature to ask this specific question since a prerequisite is: can the device be paired to Hubitat?

The "first-gen" Hue Tap cannot, be as it uses Zigbee Green Power. This one looks like it doesn't, mostly because it specifies that it takes CR2032 batteries, though I can't imagine the dial piece working well with Green Power either. So, there's at least hope for that.

If the answer ends up being "yes," then I don't see why not--as with any button device in Hubitat (which this still-hypothetical driver would likely expose events as), you can use with an app like Button Controller to run arbitrary commands on whatever device, including play/stop/pause/set volume on a Sonos device if you also have that device added to Hubitat.

That being said, some of these devices or drivers do weird things with certain buttons/dials (I recall one where the driver, possibly because the device does too, sends level events for the spinning motion instead of button events? if you're using it for volume anyway, that's a good match, though less so if you want some other arbitrary action). So, it will still depend a bit on that--assuming it works at all. I'm just more hopeful than usual about that first part given the above.

Yeah that's what I though re dials, the only other dial control I've used is the Ikea one which didn't work well with HE. I'm still using mine with the Ikea hub. Also interesting is that I read that Ikea are releasing a Matter hub this year, maybe they'll re-release their Sonos remote with better 'standards' compatibility.

Long since gave up on trying to make the IKEA Symfonisk controller knob work properly and stick with the SiL radio in the HE hub. Just never worked right and/or the battery drained way too fast.

Have mine now joined to a ConBee 2 and I use z2m with HomeAssistant where my Sonos now lives too. Works great and no more battery life issues in the Symfonisk controller.

Some devices just need that different controller and the folks that contribute to z2m do a lot of custom work to make these devices useable. That same control seemed like it was defective when I tried to use ZHA and the ConBee 2, but with z2m it works fine.

Anyone got one yet? EU has stock but not UK/US. I'm impatient

Ordered one (EU/NL) lets see how it works when it gets delivered.

I got mine, they're not quite what I thought they would be. I had presumed that each of the 4 buttons allows you to switch rooms then you can use the dial to control the lights in that room, that is not the case. The dial is always associated with 1 room only, the buttons can be use to cycle scenes in other rooms then held down for off in that room.

I'll try out my other unit direct to HE at the weekend.

Sorry, not that it's actually gonna work without drivers but I'm sending back my 2nd one, bought 2 white but want a black one for Sonos (hopefully!) So people don't confuse it with a light switch