Need a switch for my infrared heaters

i have 4 infratech infrared heaters built into my outdoor living area. It was already in the home when i bought it last year. The heaters are turned on/off via 4 separate switches. This is the product that turns them on or off.
Infratech - 14 4305 - Accessory - Dual Duplex Switch Wall Plate and Gang Box 20 Amp Per Pole

I'm pretty sure that each heater is 1500 watt (so about 14A of power per circuit).
I'm pretty sure these are the heaters that are built in: Infratech - C15 - Single Element - 1,500 Watt Elecrtic Patio Heater - C Series

From what i understand these are purely resistive loads.

I have two questions, is there any zwave product i can buy that can handle the load and that can either work with the existing switches, or replacing them? Note that there are two switches in a single gang box.

Bonus question... Is there any way i can make the temperature variable? I would speculate that a purely resistive load would work well with a zwave switch that has a PWM in it (i'm actually not sure how the dimmers work in zwave dimmers, i assume its PWM). If its PWM is there any 20A dimmers out there that can fit my use case (especially fitting two dimming circuits in a single gang box).

if i wanted to do something hackerish i could do something with arduino and a SSR at the wiring closet where the heaters fuses are, but i would prefer to buy an already made product if one exist.

Aeotec has a heavy duty switch that can Control them.

I have two in boxes waiting on similar heaters. How do you like the infratech ?

I'm a huge fan. They can get a bit hot though so I'm thinking that getting some form of regulation on them would be a good thing.

I have a second outdoor area that I'm considering adding an infratech heater to. It's that good.

I have 2 for portable air units. Good power and voltage monitoring too.

These big switches would work, but they would replace the on the wall switch i have today. i would have to wire them up close to the breaker box (all other locations would be too visible and break the WAF factor).

I was really hoping i could find something more plug and play that just fits into the gang box and still give me the equivalent function of two switches per gang box.

I've seen them, they have to be mounted in that enclosure for outdoor use and I doubt I can get away with that. I'll post some pictures to show how it looks like. Let me just get past the morning rains and I'll snap a few to illustrate.

if you want in wall and also to monitor power usage this is what i use for my roof coils.. goes up to 1800w 15amp

Awesome! i think the in-wall you linked is exactly what i'm looking for. Its quartz lamps in those coils and they are purely resistive. to be on the safe side i'll hook up my amp meter to one of the circuits to verify that it stays below 15A (I think its a 1,500w element).

Some pics for those interested:
These are the heaters (it was raining today when i took the pic so its a bit gray): 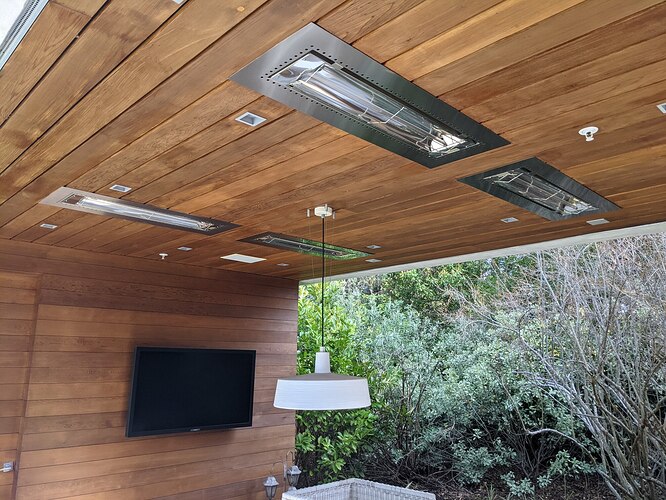 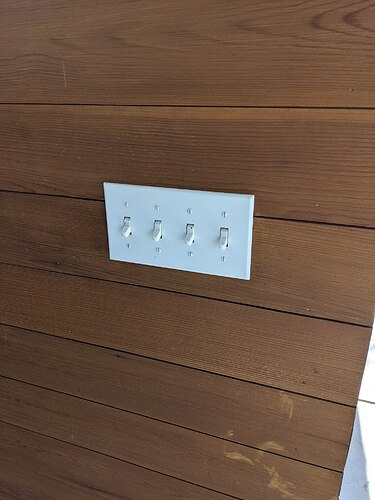 In the evenings i really enjoy the infrared heat when it gets chilly. This is how it looks like in the evenings (pic is from a party). I like watching a movie on the outdoor TV and the heaters make it quite enjoyable). 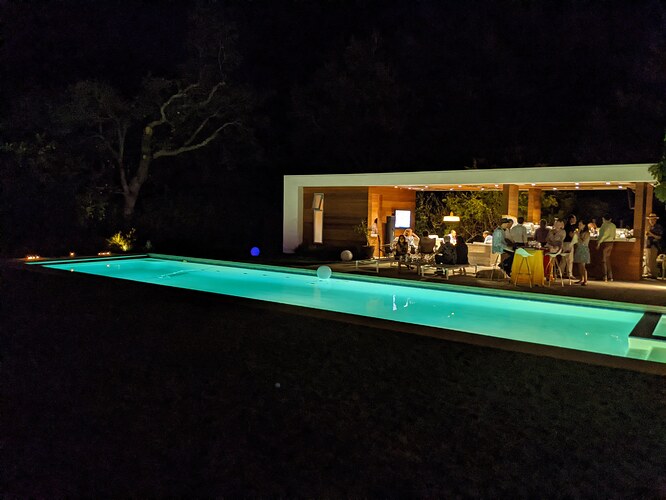 What I've often seen electricians do is a two stage system, using a standard 120v switches (or timers) to control relays that run the actual load.

I have the 12,000 watt variants installed in a similar configuration. A single 120v switch controls the overall on/off, individual switches to enable/disable each element, and individual 240v relays that actually power the elements.

That was my next step. Use the wallswich to control an ssr.

So its been a while. I ordered the 120V 15A Enerwave switches https://www.amazon.com/ENERWAVE-Monitor-Required-Interchangeable-ZW15SM-PLUS/dp/B079C32XMW/

And today i decided to tackle it. I took out the amp meter to make sure i wouldn't overload the switch given i wasn't fully sure which model of heater i had (i bought the house with the heaters installed).

The second i got the switch out of the wall i knew i was in trouble. Its a double pole switch and its fully wired. Dang it i have 240V going to the ceiling. i.e I have 4 of the 2500W elements in my ceiling and not 4 of the 1500W elements... I thought i had reserve capacity for 240v in my breaker box, turns out its actually in use.

Ok that won't work with the switches directly. i have to go the relay route. Sucks big time as i don't have an obvious place for the relay without opening up the ceiling and getting the elements to mount something over there. This will be a project for another day.

I feel kind of silly, i could have easily opened up the wall plate and checked before i bugged you all.
Oh well... Valiant effort but utter failure.... 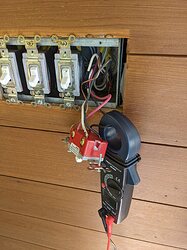 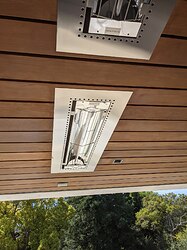 Since you are going to go with a relay or relays you will only need one switch, so you can probably fit it all easily in the existing 4 gang box.

I have four of the heaters, I like the idea of controlling each of them independently.
I'm considering putting relays in the wiring closet where my fuse panel is. I can then either close this gangbox or pull independent power from a wall outlet next to the gangbox to power a zoom 5 button switch. I haven't made up my mind but I'm leaning towards that.

I'll think about it for a bit.

Independent control is good. We have three 12,000 watts units (two 6,000 watt elements each). We rarely use all six elements. Most often, we just use a single element on two of the units.

Not the cheapest option but this is something to consider. 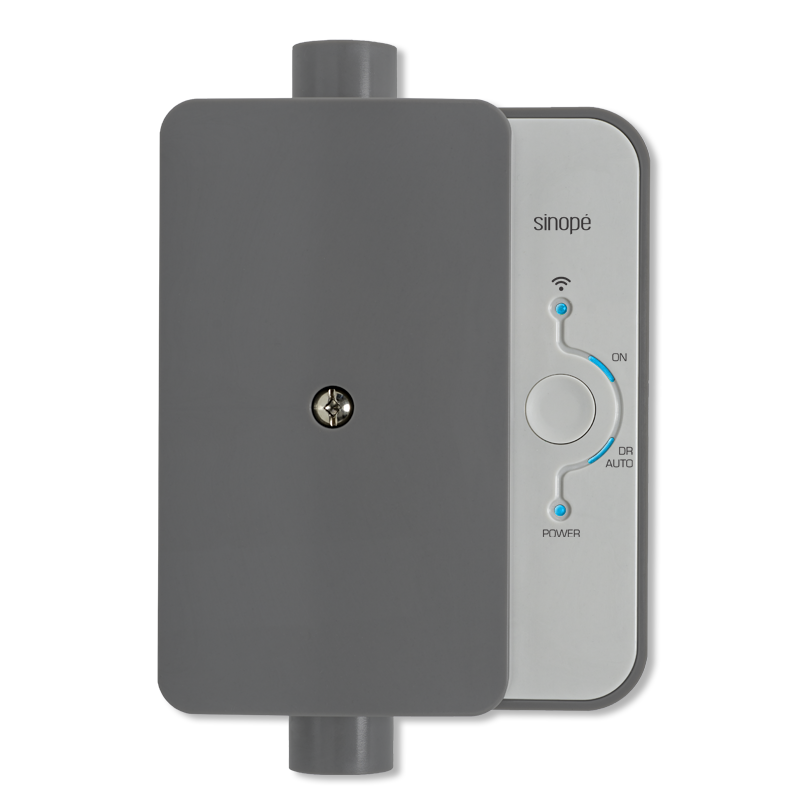 I'm thinking something simpler.
Since both wires to the element is 240v they have to be disconnected when off. ie. they use a dual pole switch in the wall. To do the same i'll put 240V 20A mechanical relay on one side of the heating element and a SSR switch on the other side of the element. i can cycle the SSR to give it a very slow PWM effect and that should regulate the temperature. The mechanical relay is only cycled at on/off and the SSR is used as a PWM/off

Thus on the other wire i'll put a 240V 20A SSR. I'll connect that to an arduino which i will program to convert one of the 0-5v input pin to a slow PWM that cycles the SSR at fractions of a hz (1/4 of a hz or even less, i'll have to trial this a bit to see what works best).

I'm intriguied by the Qubino Z-Wave Plus 0-10 V Dimmer. I'm thinking that i can use this to send a voltage level to the arduino and use that dimmer function as the way i set the level on the PWM.

I'll write a program on the arduino to cycle the voltage on/off (i'll have to do some empirical testing to find which frequency yields 50% heat output at half input voltage level) which will cycle the heating element and give me either full heat or partial heat.

With that i should be able to control the heat similarly as a dimmer on a hubitat dashboard.
I can put a master switch in the dashboard which cuts power to the mechanical relay and i could even connect that side of the relay to an input pin on the arduino to pull the power on the SSR to low once it detects that the mechanical relay is off.

I tried to find a 0-10V DC to PWM converter that operates on sub HZ frequencies but i couldn't find any. Arduino can do that easily so i think i'll go down that path.

To make it safe i need to place that in a decent electrical box in my wiring closet.

I think i like this approach. I'll think about more about it before i jump in, but this is very similar to a heating element pid controller i built for my friends brewery using arduino and SSR's and i know it works pretty well. I won't need the PID part but logically the structure is very similar.

Thus on the other wire i'll put a 240V 20A SSR. I'll connect that to an arduino which i will program to convert one of the 0-5v input pin to a slow PWM that cycles the SSR at fractions of a hz (1/4 of a hz or even less, i'll have to trial this a bit to see what works best).

Might want to check with Infratech on this. They have "cycling" controllers, but other than the use of the word "gentle" they don't spec what the on/off frequency is. You probably want to stay with a cycle time that they will support for warranty purposes. Alternatively of course, you could just by the control box from Intratech instead of designing your own.

Thank you for reminding me. I looked up the box that they use. turns out that its pretty straightforward.
They are using this part RGC1P48V42ED
which is carried by mouser: https://www.mouser.com/datasheet/2/1032/SSR_RGC1P-1806388.pdf

The SSR is a bit expensive but it is UL listed and includes a proportional controller.
EDIT: Its $200 in the US but i can order it from Europe for €111.

The controller is programmable for soft start and has mode 5 and mode 7 which is designed for short and medium wave infrared heaters. I 99% certain that Infratech use mode 5, and possibly mode 7 to get the softstart feature.

Good that you have done your homework! I always say, “It’s what I don’t know that will kill me.”