My Hubitat likes to be rebooted - Autorestart device with power off time?

After years of trying to troubleshoot zwave issues, removing ghost nodes etc, I find that after 3-7 days, random z-wave devices often stop responding. A hub reboot always solves it and then things work great for awhile.

So, makes me wonder about setting something up to autoreboot it every night. I have a programmable timer that I can easily use for this, have it on from like 2 am to 1:57 am.

Anyone see any issue with forcing a power cycle on the device nightly like this?

There are a couple of apps (i.e. [RELEASE] Hub Rebooter App) that will do that without crashing the hub by doing a power off.

Anyone see any issue with forcing a power cycle on the device nightly like this?

Yes. You are increasing the likelihood of database corruption. If you really must do this, you should do a programmed hub shutdown before turning off power to the hub.

I would recommend resolving your z-wave issues instead. My hubs only reboot for platform updates.

As noted, this is not a good thing to do, and there are apps (as Bear noted) that will reboot your hub safely on schedule.

It is not normal to need to frequently reboot a hub, you are probably masking a problem that may cause you more issues later. Your hub so your choice, of course.

If you post screen caps of your Z-Wave Details pages here, some kind souls will likely take a look at it and let you know if you have any obvious issues that might need addressing.

A hub reboot always solves it

Are you doing the reboot from within Settings? Because that doesn't reset the ZWave Radio. A power cycle is needed for that, BUT to me that's the good news. If a regular (menu) reboot does the job, then the ReBooter apps will do the same. Be careful to have it occur outside of normal maintenance.

All that said.. like @aaiyar said, rebooting isn't the best solution. It simply hides the issue. I have 5 hubs, for example and I never reboot any of them except during platform updates.

I would LOVE to never have to reboot it. My happiness level with hubitat would skyrocket. Instead, I've just gotten into the habit of seeing programs fail to run, rebooting, and then having it do ok again.

Zwave Details, it will be like 18 screen shots to capture this. there has to be a better way. I tried pasting in the html code from the details page, but that doesn't seem to work 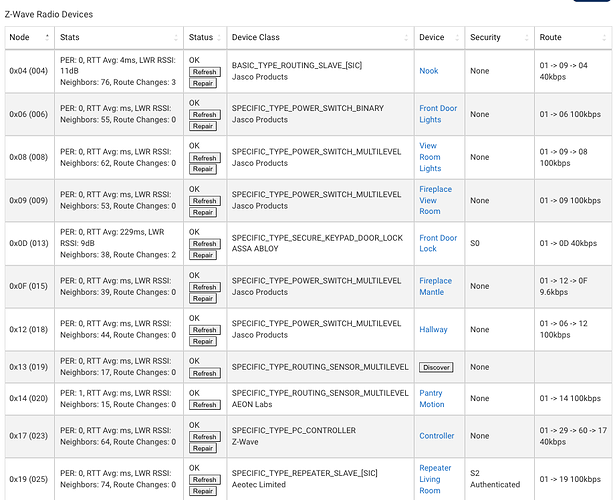 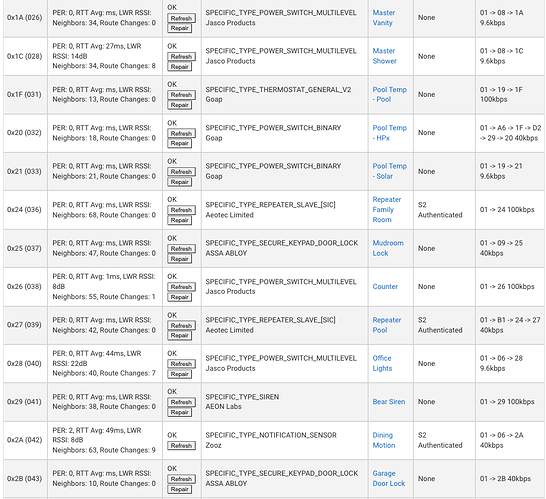 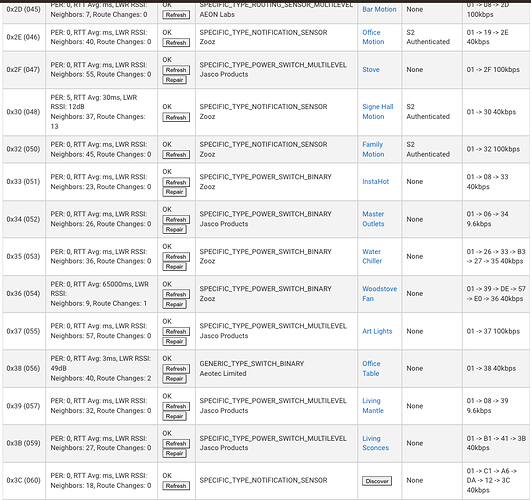 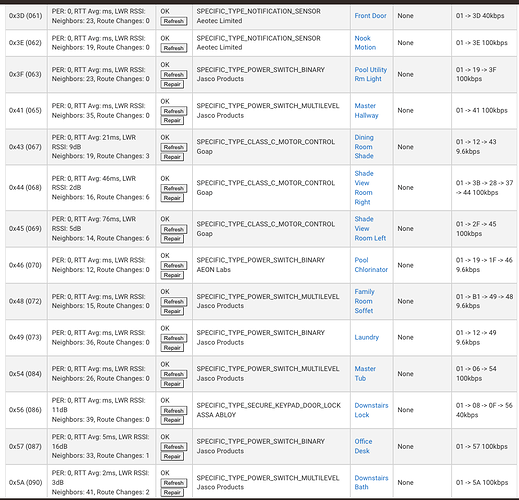 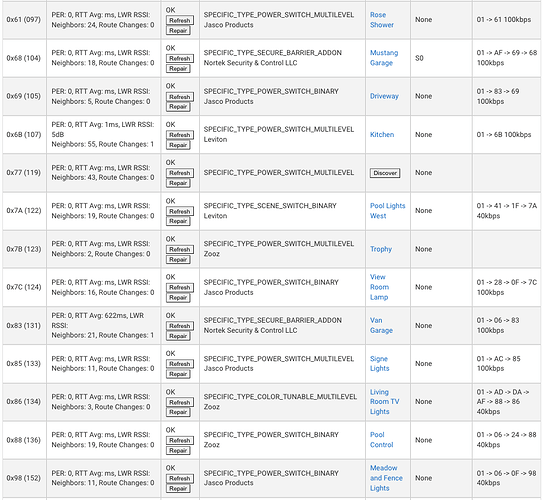 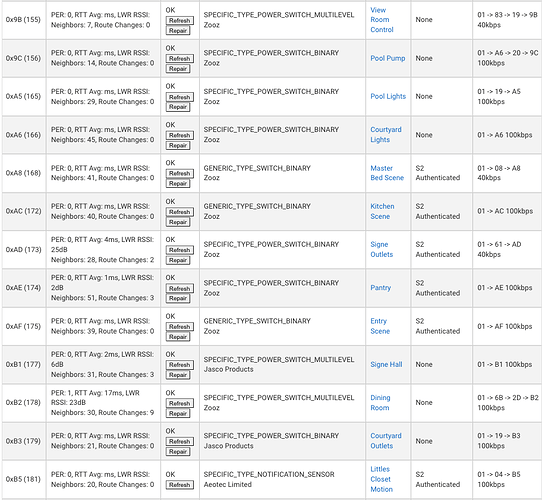 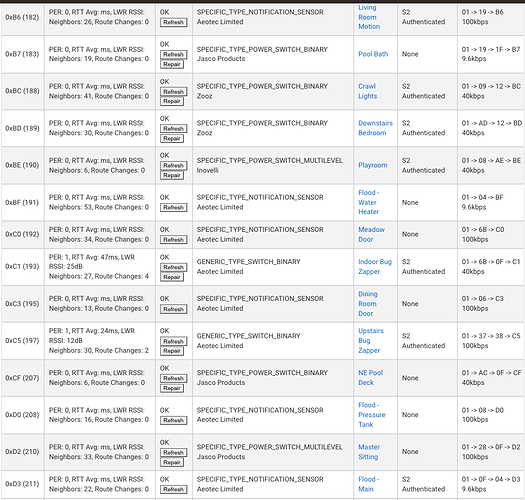 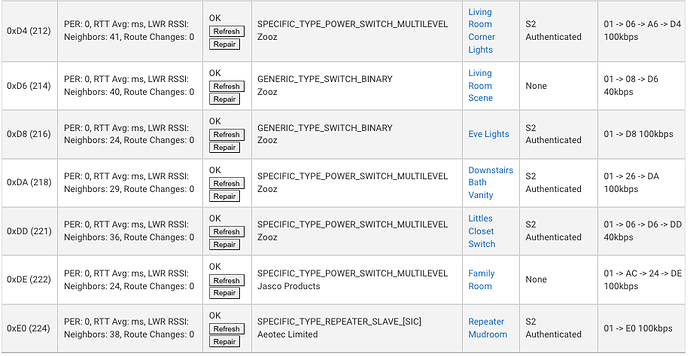 You can see that I still have a couple of ghost nodes in there. They have been terribly stubborn. I will have to borrow a pc and zwave stick to use that program, i forget the name of it, that lets you clear them out. been awhile since I did that.

If you know the device that created the ghost, you should be able to cut power to it then remove the ghost. I would also shut down the hub from the settings menu, unplug from the wall (not from the hub) for 5 mins and power back up to clear the radio then remove the ghost. If none of that works, then yes, I would get out the stick. Have you updated the z-wave firmware?

i forget the name of it

This is a very ambitious number of zwave devices to have on a single controller.

I would recommend splitting that list into two hubs.

If you know the device that created the ghost,

Ghosts are almost always followed shortly after in the Z-Wave details list by the actual device they represent. In the case of the two ghosts below, 119 and 123, they may be the same device, Trophy. Try killing power to the Trophy switch (don't just turn it off, but kill power to the switch itself) and then hit Refresh on those two switches and a Remove button should appear, then hit Remove. With luck you'll be able to get rid of both of them.

If that doesn't work, then I'd also kill power to the two "SPECIFIC_TYPE_POWER_MULTILEVEL" swiches just a bit lower in the list and try Refresh again on the two ghosts to get the Remove button to appear.

interesting, i thought the hub could handle quite a bit more than this. I'd be totally happy to split into two hubs. the house is nearly 6000 sq feet anyway.

I've done the shutdown, power off by unplugging, and power back up, but the ghosts don't die. I'll try danabw's suggestion when I get home and see if that kills them, otherwise, i'll have to fire up "overly complicated" studio and destroy them that way.

i thought the hub could handle quite a bit more than this.

From what I understand, the Z-wave limit is 232 nodes and that includes the controller. There are a few reserved nodes on the C7, so you are approaching the limits here with your 200+ nodes.

A house of that size, and with that many nodes would likely benefit from being split into two (or more) hubs. I would think simply for ease of use, and not losing everything in the event of a controller failure, it would make sense to divide up your Z-wave stuff a bit.

With that many nodes, I would surely be subscribing to the Protect service so you have a backup. I would be hating life if I had to go back and rebuild all this!

interesting, i thought the hub could handle quite a bit more than this.

The limitation isn’t the hub’s processing power. It is the congestion of a relatively slow serial network with a large number of devices (zwave at best is 100 kbits/s).

I’d recommend about 80 zwave devices per hub. With an equal number of zigbee and/or virtual devices

We have got to get this suggestion over to the SilLabs marketing team. Perfect.

I actually have just around 100. I've been at it for about 3 years in this house and have removed some devices, and then added them back in different locations months or years later, and just plain tried a pretty good number of devices. It seems that if you added and removed a device 200 times, then next time you add it it would be device number 201. In any case, its not as many as it looks.

That being said, I'll order up a second hub.

For sure, I signed up for Protect service pretty much as soon as it launched. I also try to make intermittent backups that I keep on my Synology.

When it comes to dividing up devices between hubs, any recommendations on how to do that? By zone? put the east end of house on 1 hub and the west end on the other? Can 1 hub run automations with devices from both hubs? If traffic on the zwave network is the real problem, can you keep all of your automations on the master hub and just focus on offloading zwave tasks to slave hubs?

You guys sure have given me some more to do projects! I'll get to work on these things and report in. I think i'll have to fish some ethernet cables through the house this weekend to put a new hub or two into the most node rich areas of the house.

And by combinations of above. Your house is so large that I would think that dividing by area makes the most sense.

And you can share devices between hubs using Hub Mesh.

thought the hub could handle quite a bit more

While one Z-Wave controller can handle up to 232 nodes, as @neonturbo mentioned, that limit goes down the more bandwidth sucking devices are connected to the radio. Secure devices (S0 more so than S2) and power reporting devices are known to be bandwidth thirsty. Besides splitting the mesh, limiting the amount of events that the radio receives, is another way to push a controller to the 232 limit.

Have you updated the z-wave firmware?

Worth double checking this aswell. Do you have a firmware update button in the z-wave page?

He means this one...

If it ain't there, then you already have any available updates.