So it's well known that when you go to the app after it has been in the background, you have to refresh in order to get current status (see Dashboard not updating state on multiple devices and many others)

The problem I have is that when I open up the IOS app and hit the refresh, I get one of three different behaviors apparently at random:

Loading a different dashboard is the worst, because I have to hit the TINY LITTLE icon on the top left to get back to the list and go to the dashboard I want.

To be honest, this behavior has basically made the app worthless to me... every time I want to do something in the app, it's easier and faster to do it IRL

Example: my wife is carrying two bags of groceries to the door. I want to unlock it for her so she doesn't have to put the bags down. In zero out of the last 8 chances has the app opened up, showed me the right state, and allowed me to operate the lock before she reached the door and set her bags down to manually unlock the door.

Is there some way to configure the app so that the lower left button isn't a random action chaos engine that does whatever it wants to?

Can I suggest you don't use the app at all for this? (I only use the app for Geo-fencing these days)

Try this instead. Open the app and make it so you can see the dashboard once. Then clicking full screen button 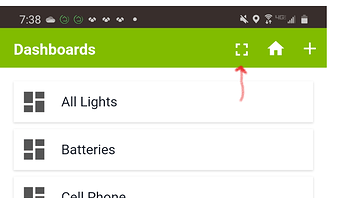 Next click your dash to open it in Chrome (or default browser). In Chrome click the 3 dots and then "Add to Home Screen".

Close hubitat and try opening the dash using the new shortcut. This not only opens the dash you selected (every time) it removes the header and footer making it much nicer to use.

Next click your dash to open it in Chrome (or default browser). In Chrome click the 3 dots and then "Add to Home Screen".

Thanks for the advice, I'll try this out.

For anyone trying to do this with Safari, click Share and then scroll down to
Add to Home Screen