I have a strange one that I haven't seen others with the same problem.
I have 3 leviton ZW4SF fan speed controllers on 3 different ceiling fans (AC).
I have a rule that when my A/C cool runs, I set the speeds to each fan and turn them on, and when my A/C cool turns off, I turn the fans off.
I have tried the system driver (only 3 speeds though) and the user driver (ernie's driver with 4 speeds).
Initially, I thought it was because I was turning all the fans on at the same time in my rule, so I separated them and put in a 1 second delay between each fan command, thinking that the flood of commands was locking up the fan speed controller's processor.

What happens is randomly, one/two/all of the controllers with lock up and not turn on. Even pushing the "up" paddle at the switch does nothing.
The green power light is on, but does not change and the fan does not run.
I have to use the air isolation switch (power down, power back up) to reset the controller and then it will function.... for a while, but will eventually lock up again.

Does anyone have a clue as to what is going on or have any ideas as to what to try?
I like the 4 speeds, but NO speeds kinda defeats the purpose!

I have 2 of the Leviton controllers under ST using a slightly modified driver from the stock one. The only delay between commands I left in was between the Set and the subsequent Get when setting on/off or speed. Experimentation with my custom driver showed that if you requested the state immediately after setting it, you didn't always get the new value. And I'm guessing that's why the drivers all add delay between commands. I have 1000ms delay between set-get operations and that has always worked fine. (ST stock driver had 5000ms between in some cases.) However during experimentation with the driver and now in "production" I have never been able to lock the devices up or required to airgap reset them for any reason, including after power outages. They're even paired with S2 enabled.

Both of mine are running the firmware 1.08, which is what they shipped with.

HHmmm... thanks for the info.
My controllers are running FW version 1.8 not 1.08.
When they work, they work, so I will keep trying things but these are the only devices that I am having problems with and I have both Zwave and Zigbee devices, about 40 zwave and 30 zigbee (VERY rough estimate).
If the problem was repeatable, it would be easier to track down, but it is random and seldom.

We had thunderstorms today and a power dip, and none of my devices had problems, so they all survived.

I'm betting we're running the same firmware version, just a different reported version number (decimal reported as 8, perhaps one of our drivers is misinterpretting what this means 08 vs 8).

Here is what I see on the device page: 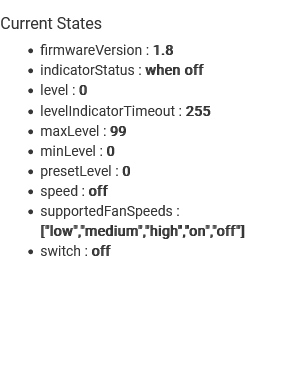 Under DATA, there is no FW version reported. Could be the driver I am using (user's Ernie)

What driver are you using? Your reported DATA is different than what I see.

I have these devices on SmartThings, using a driver I modified from the stock fan driver - I shortened the delays between commands that I felt were way too long. I likely added a few other attributes too, like MSR and firmwareVersion that the stock drivers never add.

I believe this is incorrect. cmd.firmware0SubVersion should be 0 padded to 2 digits. So 8 should not be treated as 8, it should be converted as a 2 digit 0 padded string.

AHHA!! Thanks for clearing that up!
So, yes, ours are the same firmware.

Well I just found one of my controllers had locked up.
All the speed leds were full bright and there was no response from either paddle or the up/down switch.
I had to airgap to reset.
I just wish there were more options for a 4 speed controller available.
I might even consider a 3 speed but I like the flexibility of 4 speeds more, but this aint' cuttin' it!