Those prices are hard to pass up. I wonder if the motion sensor includes light level.

have you tried the generic zigbee motion/temperature driver?

Yes, and that has similar results, only temperature (not sure about battery though).

You may have done this already, but it's worth asking: did you hit "Configure" after you switched drivers?

I have a few of these Zigbee devices coming soon (and I know Markus and some others said they did too), but my tracking information still doesn't say anything, so I'm guessing I have a while to wait yet.

Good question. At first I didn't, but I did go back an apply the generic driver, hit configure, and waited for it to check in again (temp update) and I got no humidity.

RE: shipping... It took 10 days from receiving a shipment notification to arrival (in California).

and I know Markus

I have been trying, they don't sell them domestically, yet. Once I get them to sell them to me, I will order them.

Can you try @muxa's driver for the Konke temp/hum sensor? Like the Sonoff, it is also zigbee 3.0.

I just tried that driver and let it run for several hours. No humidity, unfortunately. It was worth a try at least.

Sonoff finally released these for sale domestically in China, I ordered one of each, should be here in a few days to have a look.

Great news? So they are on AliExpress? Really keen to try the motion sensor and hope it properly supports zigbee 3!

That I don't know, I ordered them on Taobao. They are available on itead.cc for international shipping, but not for China.

They might, I hope they fall back properly to HA 1.2 since HE is not a Zigbee 3.0 controller. I did get the gateway from Sonoff as well, that one claims to be Zigbee 3.0, will have a look at that. I have a TI CC2538+CC2592 Zigbee stick I can flash a ZB3.0 coordinator firmware on to use on Linux/HA, but not sure when I will have time to play with that one... Due to the security requirements in ZB3.0 there are limits to the number of devices that can join a mesh, so not sure it will be an improvement except for the security part.

HE is not a Zigbee 3.0 controller

oh, I didnt appreciate this. Interesting.

The chip used in HE would need a custom firmware for ZB 3.0, that is if it even has enough memory for ZB3.0. With that said, any device truly ZB3.0 compliant WILL fall back to HA1.2, that is a requirement for certification, if I've understood it right.

Just received my Sonoff Zigbee devices. They won't be winning any design contests, but hopefully they will work well. The gateway doesn't come with a power supply, good thing it is of a type most of us probably have more than we can use anyway. Now off to pairing them with HE and see about making some drivers... The SONOFF gateway get to wait for another day. 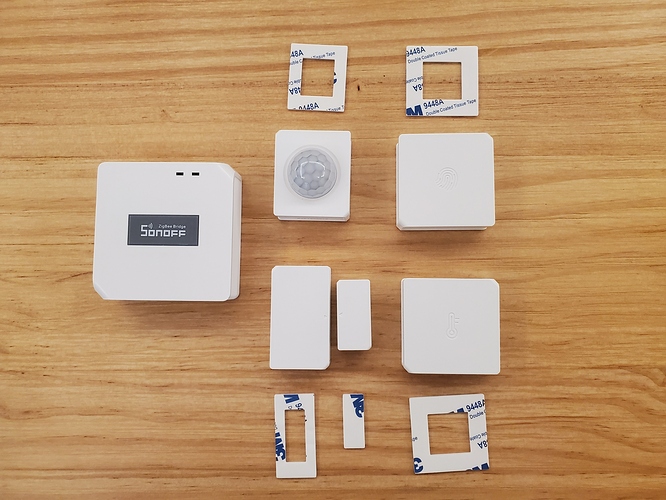 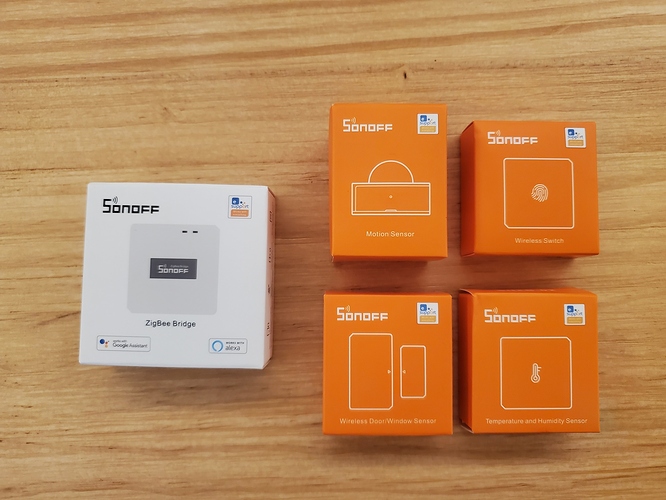 I wrote drivers for these 4 devices, never tried them with any built-in drivers. What I'd like to know, if anyone did try them with built-in drivers, which ones did you use? If there is interest I can release my drivers tomorrow or this weekend, but they will require some more testing.

Yes please! I didn't purchase yet, waiting for your thoughts and experience first. I'm very interested to know about the motion sensor in particular because this is the weakest element of my setup right now. What's its range? What's its speed? Does it fall off? Reports temperature? I'm assuming no lux. Etc.

I have the temp/humidity sensors. I tried the following:

Temp works but no humidity. I’d be willing to help test if needed.

As a rectangular box I'm not sure about how easy these will be to mount, but they might catch movement well, will have to test some more.

hat's its range? What's its speed?

So far I can say that they are fast in detecting motion. About the same as Xiaomi/Aqara. They send both motion active and inactive events, the inactive event is sent 60 seconds from the latest motion, so any motion detected will reset the internal timer of 60 seconds. Motion is detected continuously.

Does it fall off?

By the time I had written drivers for all 4 of these I had only had them in my possession for 6 hours and of those spent about 3 hours writing and testing the drivers. I've now had them for 13 hours... Will they fall off? Probably not, these are mostly standard in how they are implemented. Can I know for sure? Not yet. Then again, my Xiaomi/Aqara devices don't fall off either, so my mesh might not be the best for judging this.

No temperature and no lux, only motion. It does motion well though. Need to test range etc some more.

I’d be willing to help test if needed.

Thank you for offering, the drivers work but may need some polishing, will release them during the weekend.

With the above said, I have implemented the features that exist as far as reported features go, maybe there's something hidden somewhere, but that will be for future updates.

I tested it some more this morning, straight in front of the motion sensor it picked me up at about 7 meters. As for detection angles, as far as I can tell it's a detection area of about 120°, cone-shaped from the sensor center. Not very scientifically determined, but it covers a large area, that is certain. As I sit here typing it stays active when aimed at my keyboard, so my fingers moving is enough to keep it active.
I have a location in the master bath shower where I currently use humidity to compensate for the shortcomings of my Aqara motion sensor in there. From my initial testing this sensor may very well keep the lights on without additional trickery when taking a shower. Will install and test it there later during the day. It may not be pretty, but it works very well.

It may not be pretty

My thinking is that with its very square, plain appearance it's actually a candidate for letting into ceiling/wall cutouts whereas many of the others (iris, xiaomi) have a more complex form that doesn't work well like that.

Maybe that could work, if you do that I'd love to see some photos

I will mount it on walls or ceilings directly since all my walls have wallpaper or tiles. Order some and try them, the one I got is going into the master bath shower today. If that works, I will get two more for presence in the home office, one for me and one for the wife. We have different wants for light settings.