You are exactly repeating what i said so!

There is no confusion you seem confused. I was providing an fyi, if you don't like it then move on instead of advocating.
And the guys below and above me are compensated by inovelli. Inovellis’s support also lacks, takes them more than a day to respond @Eric_Inovelli

@bertabcd1234's post was helpful and informative, and polite. His long history here of providing useful information and patiently helping other users is something we can all learn from.

And the guys below and above me are compensated by inovelli. Inovellis’s support also sucks, takes them more than a day to respond

Man, quite the conspiracy theory! A little advice, you’ll find people will be a little more receptive to you when you don’t respond in the way that you did here. Good luck!

Inovelli is crap!
And the guys below and above me are compensated by inovelli. Inovellis’s support also sucks, takes them more than a day to respond @Eric_Inovelli

Dude are you kidding? I personally responded to you on a Saturday... SATURDAY. Thanksgiving weekend Saturday to say the least. Within 12hrs of receiving a ticket when our auto-response said we'd be out of the office from Thursday to Monday. But instead of me just letting things go, I personally went into tickets and answered your email which said the following:

There is no confusion you seem confused. I was providing an fyi, if you don't like it then move on instead of advocating.

And the guys below and above me are compensated by inovelli.

LOL -- man we can't even stay in stock bc we can't afford to buy more inventory, let alone compensate people. Take the tin hat off! 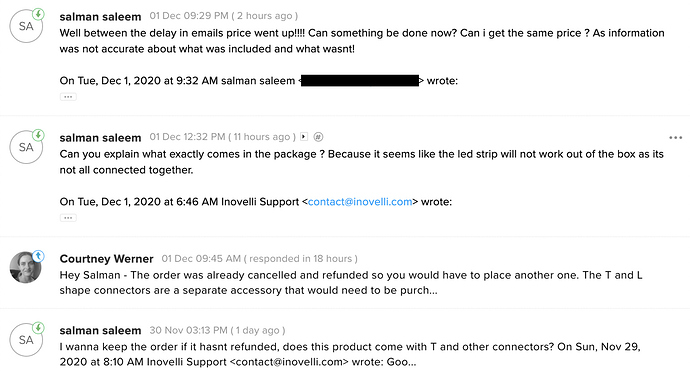 image1540×830 234 KB
Now you're asking for the pre-order price while bashing us publicly and then blaming us for a delay in response when every single response to you was within a day and we literally did exactly what you asked us to do?

Why would you want to buy from a crap company who "pays people to shill for them".

No thanks man, we'll pass on giving you the Black Friday price. This was a Black Friday through Cyber Monday sale. As @djw1191 mentioned above, treat people the way you'd like to be treated and it will work wonders for you. In this example, you've publicly put us on blast, said we were a crap company and tagged me personally -- why would I want to reward such behavior?

Thank you Eric. Shall we meet at our regular spot behind the water cooler? I am looking forward to continuing to assist you in your evil plans.

Lol -- well now that people are on to us, maybe we can meet up in a shady back alley?

We’ll see when when people get burned down with the way you treated them with the “fan switch” i read that on slickdeals. Between the delay in response the price went up but oh well. Now i know where exactly i wont be buying from. Thats inovelli. You responded on a Saturday? Thats a hint Add cancel order option for end users.

But courtney never responded telling me if the order was refunded you call that customer service @Eric_Inovelli and even now when someone emails you there is an automated response saying we are out of office for thanksgiving really ???it’s Tuesday now. 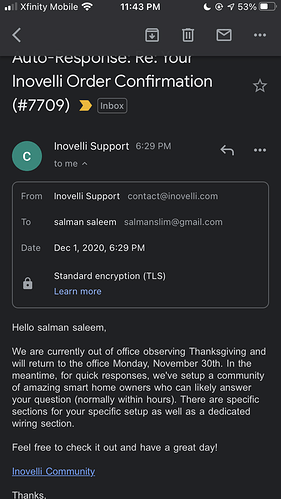 If you'd like to share your experience, please do so in a manner that is suitable for public discourse: FAQ - Hubitat