In case you missed it: Hubitat announced that it will be present at the most influential tech event in the world! [YouTube]

In case you missed last night's Hubitat Live! :find out how lead software architect from Hunter Douglas chased @mike.maxwell on his way out from the CEDIA Expo, on the first day of the show, inquiring about a new API integration for their high end blinds and shades.

After sharing their insights about the recent CEDIA Expo, @pete the Hub Whisperer went over what's new in the 2.3.3 release and gave a progress update on the next video that he's been working on, using the newly added integration with the affordable WiZ bulbs.

The episode ended with an exciting announcement: for those who might be in Las Vegas at the beginning of January 2023, for the first time ever, Hubitat will be present at the CES from January 5-8. 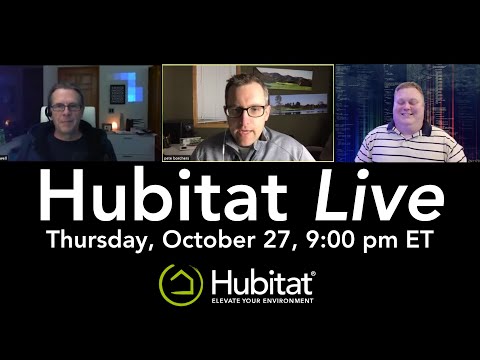 I wish cedia would release the video they did of Hubitat's presentation.

I asked a question about whether there was any progress trying to get U-Tec to expose more that an just locked/unlocked for their Z-wave Ultraloq. There was a response that it was going to be addressed, but wasn’t. I understand there was only 1/2 hour and lots to discuss, but could you give us any update on that subject now?

Also, there has been an ongoing thread for months now about how much “better” the hub works with antennas. (By “better” I mean many more direct connections which are faster and greatly eliminate mesh traffic, especially as Z-Wave seems to love sending everything through 1 repeater/switch for a lot of neighbors). Can you tell us if there has been discussions about making a version with an antenna option?

Can you tell us if there has been discussions about making a version with an antenna option?

This has already been addressed about a year ago:

This has actually been under consideration. Thanks for sharing your experience. Did you add external for Z-Wave? or Zigbee?

And there has been nothing said since then to indicate that external antennas were no longer under consideration.

I haven’t yet because my daughter’s den depends on a switch that isn’t attached to the load and she has to use that every day. (“Real” switch is only on the inside and behind how the door opens). So I can’t be without the hub for a week or so. Plus some others that would get me in hot water with the Mrs.

I’ve been hoping for the C-8 with antennas so I could just swap it out without missing a beat.

So I can’t be without the hub for a week or so.

I bought a C-7 that @lewis.heidrick did the antenna mod on. Then I used Hub Protect to restore my existing C-7 and z-wave radio db to the new hub. Then I replaced the old C-7 with the new C-7. Total downtime less than 5 minutes. I factory reset the old C-7 and sold it.

Thanks for the reply. I thought about that but was hoping to do it with Hubitat’s own version, since it’s been several years since the C-7 came out. With zero knowledge, and 100% guessing, I’m wondering if the are waiting for the 800 series chips to come out with a C-8 hub.

Oh well. Since I moved my hub to a much better location more devices are connecting directly. I’ve waited months for the mesh to get better with some devices but it hasn’t happened. I’m trying to decide if I should do a full Z-Wave repair first to see what that does.

I’m wondering if the are waiting for the 800 series chips to come out with a C-8 hub.

That would be the prudent thing to do as well and let SiLabs work out the initial bugs. Besides that a new hub design is costly. 1st you have the designer, then you have the SiLabs certification, then you have the FCC certification, then there is the tooling costs, not to mention all the time it's going to take to adjust the OS/Platform software to even take advantage of the chip and any other features they throw in... I'd say a good 2 years at least... I mean look at ST, they are still running on 500 series.

hoping to do it with Hubitat’s own version, since it’s been several years since the C-7 came out.

Depends on one’s definition of “several”, but it’s been about two years and three months since the C7 was released for sale.

I wouldn’t hold my breath waiting for the next gen hub, although there is probably a reasonable chance it could include an upgraded/external antenna based on their public responses to user input here.

Since they will be at CES in January, you could consider waiting to see what, if anything, they announce while there.

Edit: Also any upcoming hardware revisions will need FCC approval before they can be sold in the US, and that database is publicly available. No indication from that source the next hub is coming soon, either.