How use a zooz zen15 and not too many reports?

Hi all
I had a problem with z-wave and too many power reports
I have two zooz zen 15 on the sump pump each only runs for a few seconds when they rum I like to track when and how long put it a dashboard
an in a google sheet without putting a load on the hub
can a rule do this or an app?

Assuming you're using Hubitat's built-in driver for this (Zooz Power Switch), you have two options that affect power (wattage) reporting: one for percent and one for time. The percent-based one sends a report whenever the wattage changes by at least the specified percentage; the latter causes a report to be sent at the specified interval regardless of change. You can use one or both, but generally the former is more useful. You can ignore the options for current/amps and voltage unless you are using them for something else or, of course, if you're using current instead of power (I disable them because I like to limit unnecessary traffic on my Z-Wave network).

If your sump pump runs rarely, you should be good to use a small percentage change for the "Power report value change" preference (and you can probably disable the time-based one, but either way is fine). As long as it's low enough to catch the change in power usage, it should work. What I don't know is if the ZEN15 itself might have some limit, like if your pump only runs for one or two seconds and the ZEN15 doesn't have time to "realize" that and send a report before the pump turns off. I've never run into that with my usage of this device, but I'm pretty sure everything I've tried it on runs long enough and changes often enough for me to get the reports I need.

So, that's the ZEN15 part of this question. I hope some of the above helps, since the actual problem there isn't clear to me. For the Google Sheets thing, nothing built-in can do that, but I know there is at least one community attempt at writing or porting a "Google Sheets logger" that you can find with some searching here. However, I'm not sure if anyone has something like that working currently. There are other solutions for visualizing data, too (Grafana, Home Assistant with built-in history, HubiGraphs), some of which require something external to set up, but might be worth looking into, too.

This sounded familiar. Then I remembered we had discussed in DM. Might be good to post here so others won't need to repeat what we've already talked about.

Sure. First of all, you need to make sure any energy reporting device doesn't get too chatty. If you are getting energy reports every minute, that's an unnecessary drain on the hub. So I'm showing here the key setting of Power Report Value Change of 100 watts. My pump draws about about 800 watts, so all I need to know is when a major draw becomes becomes present.

I have a few global variables with connectors define in Rule Machine. I also have a global variable CurrentTime as a Time variable defined that I used, but there is probably a better way to do this than what I'm doing. But what I have there is working so I haven't improved it. In a rule that runs each minutes, it sets this global variable to "Set CurrentTime to current time". Like I said, this isn't the smartest way to do that.

Here's a rule that I have that runs at 11:59 PM each day. This posts total kWh for the day of each appliance to a Google spreadsheet via IFTTT, and resets them. There's also a conditional here that basically says that if the sump pump hasn't run today at all, then tracking interval is no longer meaningful, so I just set it to 9999 and set the "direction of saturation" to "Dry".

Finally, here's the rule that gets triggered each time the sump pump kicks on (as determined by change in power consumption by at least 100 watts). 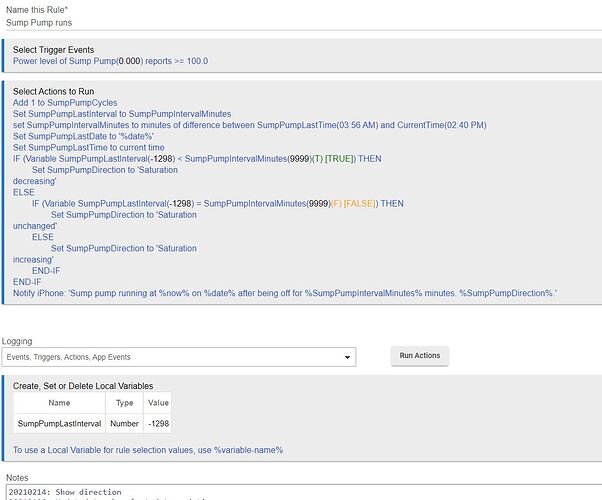 I am thinking I have to use seconds instead of minutes

If your sump pump sometimes runs multiple times in a minute, your use case is certainly different from mine. Even when the ground is really saturated, it stills takes mine at least six to eight minutes for the barrel to fill back up to halfway where the float is. Any more frequent than that, and I’d be looking to build an ark.

I'm really trying to help, but not following you. The first thing that I suggested to you was to use Power Report Value Change at something like 100 watts so that the ZEN15 will raise one event when the sump pump comes on, and one when it goes off. Unlike some loads that a power monitor may track, a sump pump coming on and going off is dramatic. I can't see why you'd need events generated on any regular time-based interval.

Knowing when it comes on and when it goes off, you can compute run time, intervals between cycles, etc. As I said, I use whether the interval between cycles is decreasing, stable, or increasing to tell me whether the soil saturation is getting better or worse.