How to externally detect liquid level in a container?

You are reading my mind; I thought of a scale as well, thinking it might be easier than finding the right springs!

Since any product containing the word "Marine" in the product name is significantly more expensive than the same product without that moniker, I would not recommend this option unless all else fails.

Several manufacturers make ultrasonic tank monitoring equipment. It would be really fun to get the Hubitat Team to develop and interface to NMEA 2000 (the marine networking "standard").

Yup, I was thinking about buying a "Marine" water sensor for my saltwater reservoir and then saw the prices. Ummmm, nope! LOL

How about a simple float switch installed to the level at which you need to be alerted that its too low. Connect the wires to a z-wave dry contact sensor.

You'd want to use an ultrasonic distance sensor for a caustic materials solution. Because the sensor never touches the liquid, there's no chance of it degrading. 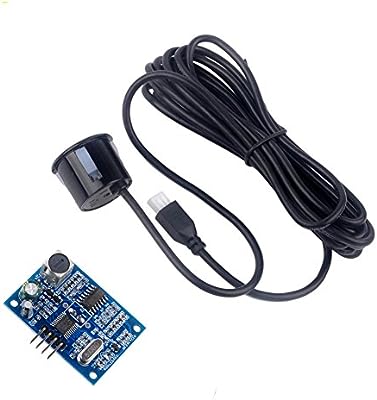 Basically, you take the sensor and down-fire it into a container. Then, you connect that to an Arduino and use HubDuino to tie it into HE.

@denise.grider, I use this sensor with Hubduino to alert me when my rust removing addative tank for my sprinklers gets low. Ever since I installed Rachio the tank takes a REALLY long time to deplete and I don't want to end up a rust coating on my walls because I forgot to refill my tank. I have the SR04t ultrasonic sensor attached to an esp8266 device in my garage. I also keep this sprinkler on my Grafana dashboard so I'm aware of the level. 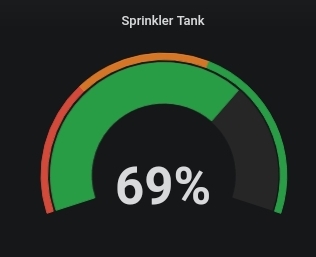 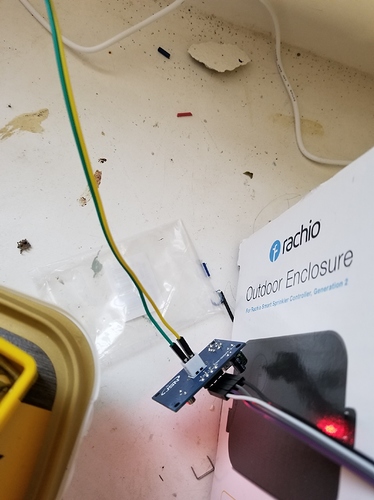 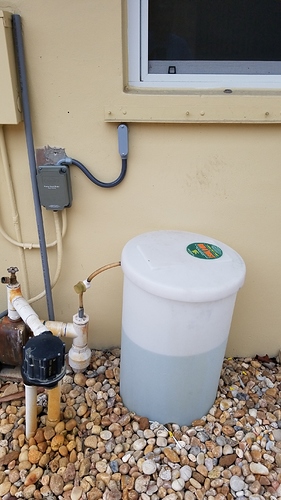 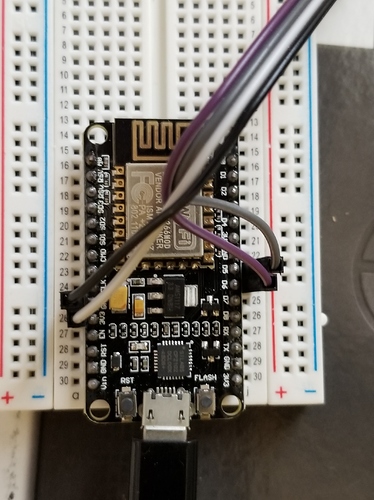 If it was me... I wouldn't care about the levels; just a single level or threshold I care that it goes below. I'm sort of up to my ears in ESP8266/RPI projects so I wouldn't go for a DIY approach on this particular one.

Assuming you can mount something in the reservoirs buy a level switch like this:
https://www.alliedelec.com/product/rs-pro/519242/70790348/?gclsrc=aw.ds&&gclid=Cj0KCQjw4qvlBRDiARIsAHme6osCoii4ukk4CTagoEPMn9j-8ktaPUo8gdP15MOTZpB1LLB4614rvY8aAtl-EALw_wcB

and hook it up to the terminals of this:

This Sensor mounts to a door or window, detects when it is opened or closed, and sends a Z-Wave® trigger signal to the network. It also has a tamper-proof switch, which will trigger a Z-Wave signal when the sensor's cap is removed. These trigger...

Do it twice for both tanks. Call it done.

If you want a project that uses a ESP8266 (low cost both operating and to purchase compared to a pi) and an ultrasonic distance sensor look here.

You would have most of the code for the firmware. Then you just need a driver. Even though I have built a lot of DIY stuff though I still say go mostly OOB. I have too much to maintain and I'm slowly replacing stuff I can with retail/less upkeep solutions.

Wait a second... is there a hubduino firmware for ESPs?

Wow... just looked it up. There is. Well, that's going to make a few of my projects a little more streamlined.

Wait a second... is there a hubduino firmware for ESPs?

Yup...Dan (@ogiewon) is truly the man.
I just realized I posted the "before" pic of my tank in the last post. This is the current setup....which I might redo soon. 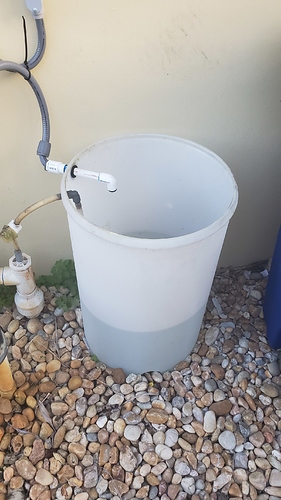 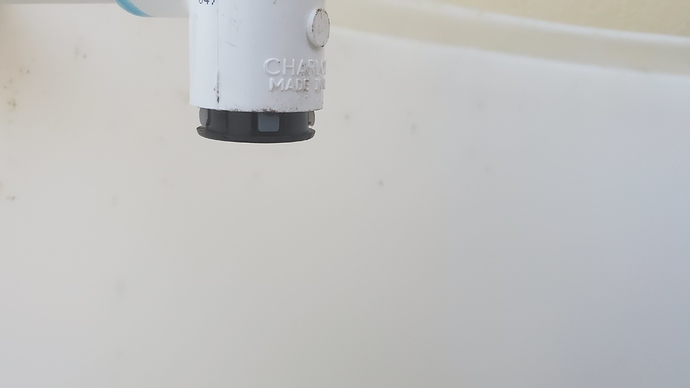 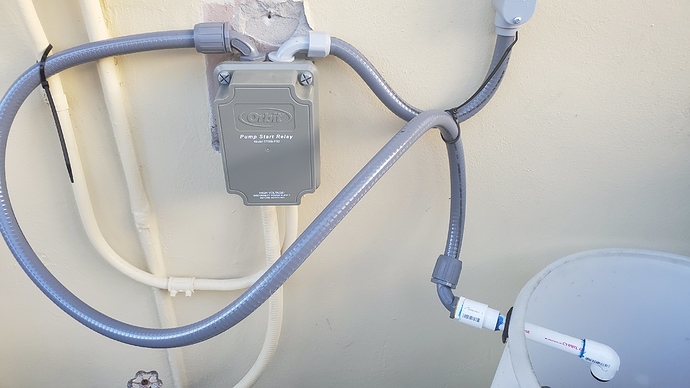 There's actually a level sense library for the Hubduino Project (if you're thinking of going the ESP8266 route). Drivers and board software are already build and work with HE.

Announcing the release of HubDuino v1.1.4 (aka ST_Anything for former ST users) [UPDATE 1.1.4] Adds support for SHT31 Temperature and Humidity I2C Sensor [UPDATE 1.1.3] This version brings significant enhancements to the EX_Servo class to allow asynchronous and simultaneous motion by multiple servos. Also, the speed of each servo, as well as min and max endpoint angles are now user selectable. Special thanks to @VooDooFiveTwo Jeff Albers for his contributions! [UPDATE 1.1.2] I have added I…

There's actually a level sense library for the Hubduino Project (if you're thinking of going the ESP8266 route). Drivers and board software are already build and work with HE.

Dan made an ultrasonic driver that captures volume as well. I modified the PS_Ultrasonic.cpp to compensate for an issue with the version 2 of the sensor that needed a longer write time to the transmit pin. I also customized the driver to send level events so I could get a percentage reading as well as the raw distance. Working really well so far.

I talked to hubby some about this, he actually mentioned Arduino and I only thought he had a pi

. But he doesn't think the IR sensor will work because the chlorine and muriatic acid are so caustic, same for anything that actually has to sit in the liquid. But I have given him some food for thought, so thank you to all!

he had a pi

because the chlorine and muriatic acid are so caustic, same for anything that actually has to sit in the liquid

That's the beauty of the ultrasonic distance sensor. It sits above the liquid level and you can even adjust it to a height that's above any outgas vents you want to put in (which I would do regardless). That way, the sensor sits above any of the caustic gasses and should survive for years.

@stephack You really should trim those black zip ties.

You really should trim those black zip ties.

Ha I was thinking the same thing!

LOL.
Yes I do. The weight of the whip was causing the pipe with the sensor to shift slightly over time so I needed to easily adjust the position of the whip. Now that it has settled, I really should tighten and cut them.

Please add your updated pics when that is complete.

I'll wait till I have patched and repainted the wall too so I don't trigger anyone else's OCD.

Trust me I was really admiring your wiring. Those just stuck out. I was going to add that you could have used grey zip ties as well.

A float with a strong magnet on it,box standard contact sensor. Just have to devise a way to keep it against the side 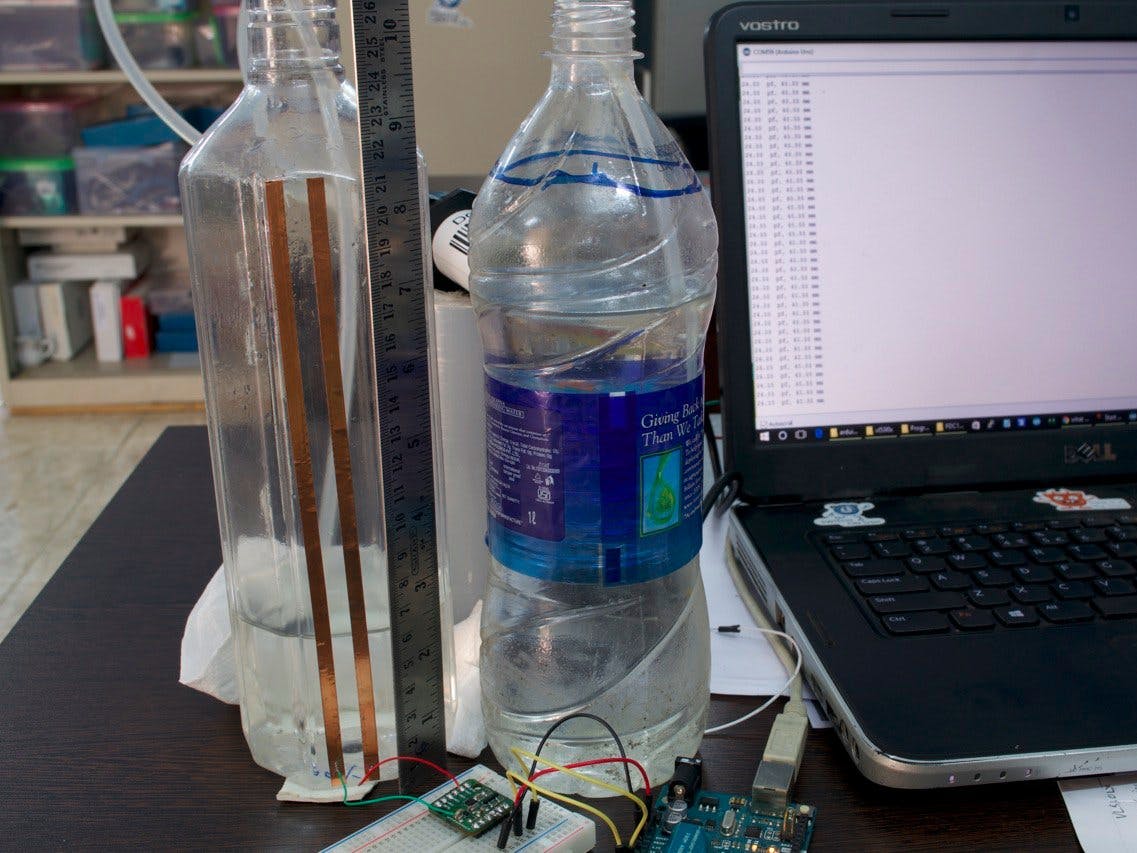 We used a TI FDC1004 breakout with an Arduino to measure liquid level in a bottle using the capacitance between two adhesive copper strips. By Ashwin K Whitchurch, Venkatesh Bhat, and Manikandan S.