How to approach an old fan in an old house

Brand new to Hubitat and Zwave, but have largely rewired 3 of my houses, and used a lot of X-10 in the old days. And I'm a computer guy professionally.

I'm in an old house; the current one is 100 years old, lath and plaster walls, still some knob-and-tube wiring in place (rather less than when I bought it).

In our "media room" there is a ceiling fan with lights on it. There is a single ordinary wall switch on the wall, that seems to apply power to the whole thing, and then two pull-chains on the fixture itself, one of which turns the lights on and off and the other of which cycles the fan through 3 speeds and off. I imagine this is a very familiar setup to some of you; I know it is to me.

I haven't checked yet whether hot (and neutral) enter the wall switch box, hot gets switched, and then neutral plus switched-hot goes up to the fixture, or if hot and neutral come to the fixture on the ceiling and then there's a switch loop going down to the wall box. In various other rooms I've checked, I've found both configurations. Obviously the details of this matter, but exactly what each state means depends on what I'm trying to achieve and what switches / modules I'm trying to do it with.

I strongly want Zwave dimming on the lights. It's a four-bulb fixture using fancy bulbs (because the bulbs are visible), so I don't particularly want to use smart Zigbee bulbs to achieve the dimming. (For this fixture I need "pretty" bulbs, the current ones are LED flame bulbs with 4 apparent filaments, and high-CRI 4000K color temp because that's what I'm using everywhere, I'm an avid photographer and have a lot of other people's art as well, color matters, and that's just too complicated to also have to insist on Zigbee too.)

I'd kind of like to have Zwave control of the fan, at least on and off, but ideally speed control too (not just "speed as set with the pull chain").

The approach involving the most work, I think, is to expand the wall box with the current switch and add more runs between the fixture and the wall box. I could do this in the wall (probably involving a plaster patch where wall meets ceiling; I've done that, I'm not very good at it), or in surface-mount conduit (I've done that to add wall switches to ceiling lights in a few other rooms). Then it's easy; use a Zwave fan-controller for the fan part and a Zwave dimmer for the lights.

So clearly I'm unlikely to be completely skunked on my goals here.

But I'm fascinated by Zwave and I keep wondering what other approaches are possible, both for interest, and in hopes one of them might be easier.

For example, I can maybe put in a little dimmer module to handle just the lights (if unswitched hot is present in the ceiling; or if I add or repurpose wires to make it present)? And then handle the fan...somehow? Are there little fan control modules like the little dimmer modules, little relay modules, etc.? Things intended to be buried in a box rather than accessible in a wall box? And then, if there were two modules doing the actual work, repurpose the wall box to hold a button controller device which, through the hub, would control the modules controlling the fan? This can actually be done with hot entering either the ceiling fixture or the wall box (one reason I haven't checked yet). (All the button controllers I can find run on batteries, which does make this easier, but in general I want very badly to avoid batteries; are there wired-in button controllers?)

So, basically, I can think of lots of ways to do this, some of them requiring parts I haven't located yet but which might well exist, others using easily-available parts. I'm trying to figure what the trade-offs are, and most especially what I'm missing.

Would greatly appreciate people's thoughts on how to approach this kind of issue!

(This is not the first thing I'm doing! I've got some simple switch replacements and maybe a simple module install, and possibly even a track-lighting installation I've been putting off for most of a generation, 25 years, that would be a lot nicer with Zwave control. So I'll get some experience with that, and probably sensors and scene programming and things, before committing to how I'm going to do this fan. But...starting to research the fan now, so I have it settled before it's time to do it.)

Easy solution, the inovelli fan/light switch will do exactly what you need, without having to fish any new lines. You will have fan speed control and light dimming control. If you have a switch loop you can simply convert the wiring at the switch to a hot and a neutral, this is accomplished by changing some wiring connections in the octagon box of the fan. It is the only solution out there when you have just a hot and a neutral from a ceiling fan.

Inovelli LZW-36! Yes, this does look like it does exactly what I need.

They've taken the step of their own radio link, thus getting around the wiring issue. By integrating the pieces they save me from thinking about that level of detail.

The switch-box is maybe 15 feet through thin air, and about 10 feet from the Zwave hub, so none of the range issues arise in my use-case, nothing to worry about there.

It's even on Amazon, so I should have found it myself. I think I overload going through so many hits and finding the information I'm looking for sometimes hard to find.

Yep, they are the only ones with this innovative solution to a problem so many people have. As a bonus, the switch has their LED light bars that you can automate. Mine pulse red when there is a weather warning in my area, as one example of how I use the LED light bars. Love them.

Yes, I noticed the light-tree potential :-). No idea what I might use it for in the end (your use is not at all a bad one for pulsing red!).

(So how does your hub know there's a weather warning? Mostly we get them on audio weather radios, but none of ours do Zwave

how does your hub know there's a weather warning

Try the Openweather driver. It's excellent.

And regarding the thread title...

How to approach an old fan in an old house

Slowly, and carry a digital multimeter...

That alerts driver -- I have to get the code from Github and somehow install it into Hubitat? Haven't don't that kind of thing yet, but can't be that hard.

(And yeah, multimeter handy -- though I'm pretty fond of my old neon bulb tester, it can show me if a line is live without even a ground.)

Slowly, and carry a digital multimeter...

I'm glad I wasn't the only one thinking it...

Follow the link at the top of the thread to go to the github:

Then copy the all the text for the driver, Ctrl-A, Ctrl-C

Then create a new driver in HE:

Select the Drivers Code tab in HE:

Click the New Driver option and then paste in and save the driver code.

Then you're ready to create a virtual device using that driver, and set parameters, etc.

I'm glad I wasn't the only one thinking it...

I'm not so sure you should be thinking like me. Gets me into trouble all the time...

Ah, the "choose the driver" step wasn't obvious, especially given truncation on my display. I've gotten as far as installing the driver code, and it recognized it as the right name, so I'm cautiously optimistic at this point

Yup - that's the hard part. Now you just create a new device from the Add Virtual Device option at the top-right of your Devices page, and choose the driver you just installed as its driver, and give the virtual device a meaningful name that you'll easily remember.

Follow the info on the thread for configuring the virtual device settings.

Now have the fan controller module here. The more I look at the light plus fan assembly hanging from my ceiling, the more I think I'm going to wait until I can have friends over to help to try to actually wire this, though. 10 foot ceilings, and then messing with wired-in stuff that is too heavy to hang on the wire; will need at least one more ladder, too. Not something smart to try with just one person, the more I look at it.

Here's a couple of ideas Not to try. (see next post)

Sorry, had to format to import. 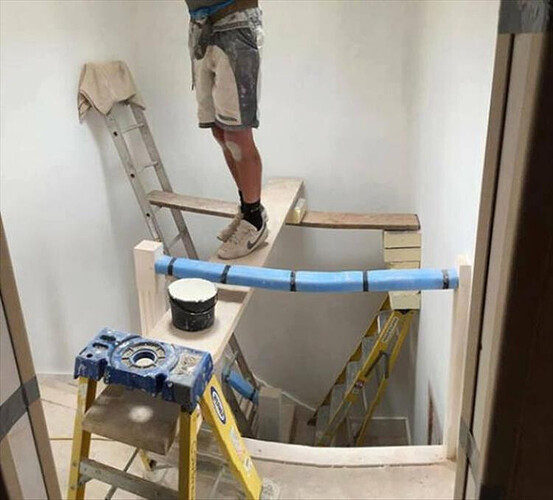 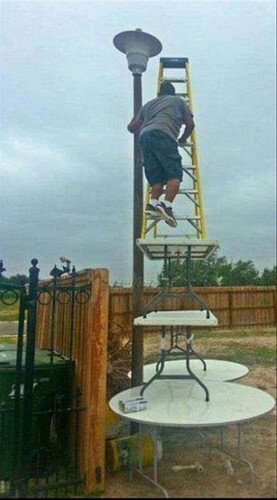 Yes, I think setups like that have a fair amount to do with why I've lived so long. I mean, that I never do that kind of thing!

Scary...the first one actually looks real, just nutso to trust that he would trust that the universe is going to protect him.

Secod one looks like a setup. I sure hope it was, anyway.

.the first one actually looks real

I have actually done something slightly similar to the first one. It wasn't nearly as janky as that, but did involve multiple extension ladders in a stairwell. Mine ended up almost like a cross between a catwalk and scaffolding.

I am SO glad you are still here to talk about it...

We all do something dumb once or twice, don't we. I'll keep mine to myself for the moment...