Note: If you want to just backup/restore/clone the stick, just use the ZStick G5 tool from the Sofware Prep Section

For flashing, if you have a non-us Hubitat that came with two separate sticks, this will not work for you. This is only for the Nortek combined Z-Wave/Zigbee stick.

Why you shouldn't do this:

The Nortek stick runs a Z-Wave library version from SDK version 6.51.06 from 2014-2015. I couldn't find anyone that had attempted to upgrade the Z-Wave portion of this stick before, so I did some research into the datasheet for the SD3503 that powers the Z-Wave portion of the stick, and successfully found a way to upgrade it. After you upgrade you will be on version 6.82 which is the latest available. This opens up a number of features to the stick. Again, unless Hubitat adds support, these will be no good to you unless you run this on a different platform such as the Z-Wave official PC controller, or a project like OpenZwave.

Optional Software:
PC Controller - Can be used for nvm backups and/or to verify new firmware version 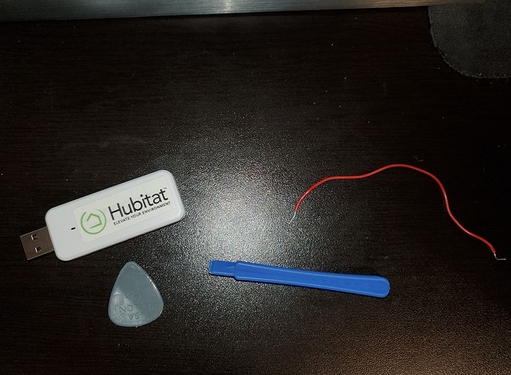 Backup up the external NVM (network and node info)

Download the Z-Wave sdk, and put the new controller firmware file aside. Ensure the file matches below:

Download and install PC Controller if you want to verify that the library successfully updated or to use new features such as NVM backup/restore.

Capture221211×403 96.5 KB
3. Take one end of the metal wire and ground it to the metal usb plug taking care not to short out components on the board. I recommend doing this while the other end is unplugged. I pushed it in when the stick, so I didn't have to hold both ends.

Locate pin number 15 (RESET_N) below. Pin numbers go from 1-32 starting from the top left of the chip going counter clockwise. Pin 15 will be the 2nd from the right on the bottom of the chip.

Make sure your usb stick extension cable is not plugged in and practice grounding pin 15. Ensure that you can place the other end of the wire on that single pin. You will need to do this several times throughout the backup and programming process. You must take care to not let it contact other sections of the board as it could short out the chip.

With everything set up open the Z-Wave programmer tool.

WARNING - When using this tool do NOT click the "Erase code space and lock bits" button. This will erase vital calibration data, than can't be restored unless you have a backup of the NVR section later in the guide. Even then, I don't have the steps to restore the calibration data if it is lost. 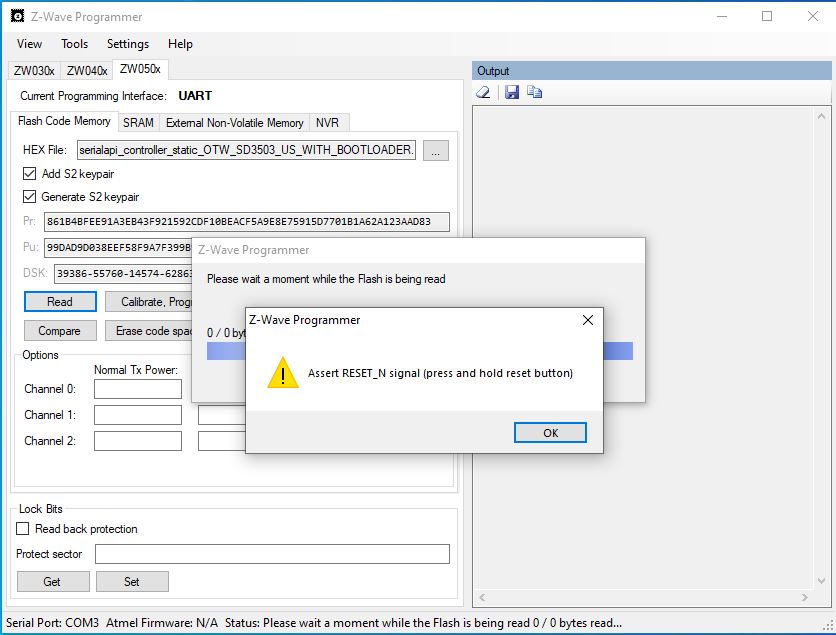 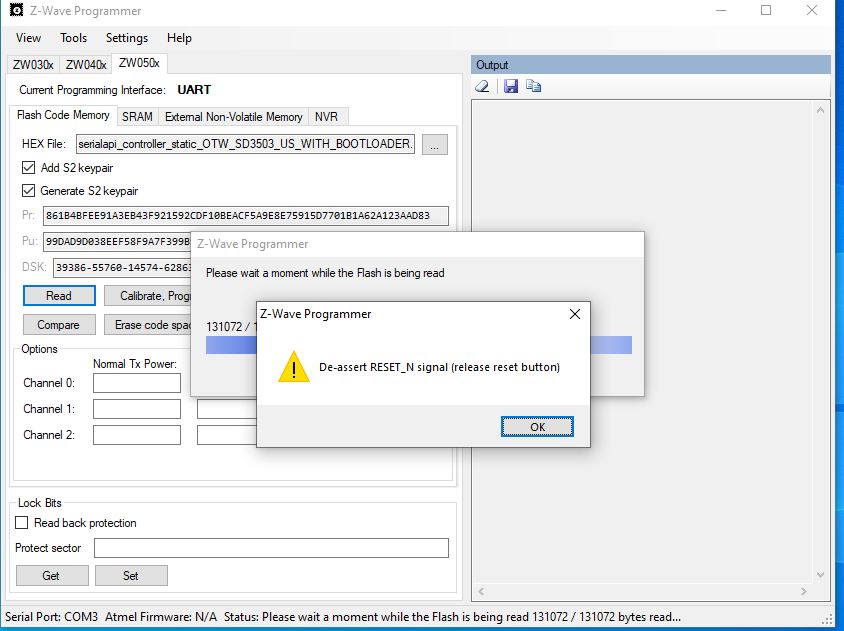 I don't believe this is needed, but can be done for completeness.

External Non-Volatile Memory
The nvm cannot be backed up in this tool over UART. This backup was performed earlier in the software prep section.

This section is chip specific and needs to be backed up, and should only be restored to the chip it was taken from.

Click the "Read" button and follow the prompts to ground the reset pin when needed. Save the file as NVR.hex. You can also save a screenshot of the values that populate.

Take a screenshot of the returned data. If the "Read back protection" box is not checked after this, please share your OriginalFlashCodeMemory.hex file.

You can also click "Get Options", and save a screenshot, but it might not show valid values with read protection set.

On the Flash Code Memory section, click the 3 dots next to the "Hex File:" input, and open the file
SDK_v6_82_01\SD3503\ProductPlus\Bin\SerialAPI_Controller_Static\serialapi_controller_static_OTW_SD3503_US_WITH_BOOTLOADER.hex

If this is your first time flashing the newer firmware, also check the "Add S2 keypair" and "Generate S2 keypair"

Finally click the "Calibrate, Program, and Verify" buttons. Follow the prompts to hold down the reset pin the entire time it is flashing. If you don't, you will need to restart the process, as the flash will fail.

Close the programmer out, and open Z-Wave PC Controller 5. Click on "Network Mangement" and select your controller node in the top left. On the right the new version should read "Z-Wave 6.09". An original stick will show 4.05.

Congrats! You now have an updated firmware. You can play around with the NVM backup/restore using this tool, as well as with SmartStart and including s2 devices as the controller will now show as S2 capable.

Thanks for this write-up. Amazing stuff, really.
I will probably try this out in the future, but since my hands are not so steady, while reading I was thinking if it would be possible to solder two wires (1 from pin15, other from ground) into a mini momentary switch I intend to procure at my local components store.

There does seem to be a plated-through hole (down slightly and to the right of pin 15) that is connected to the pin. Seems like you could solder to that pad if you first scraped the green solder mask from the pad/hole, thereby greatly reducing the chance of damaging the chip. Or, you could scrape the solder mask off the pad/hole and touch the wire there, reducing the chance of shorting an adjacent pin.

Thanks for pointing that out!

Thanks this worked perfectly. I have the C4 versiona and had to update this to update the LZW36 light and fan switch firmware

I'm having some trouble tracking down the latest Z-Wave SDK that works with and contains the Z-Wave 500 Series firmware. Downloading SimplicityStudio v4 or v5 doesn't seem to offer up the right SDK either. Does anyone have any clue where I might find it? I did track down a link to version 6.81 straight from the Silicon Labs salesforce site, so they must still have direct links active... Just nothing listed on their website.

The PC Controller SW installed from Simplicity Studio 5 works with my Z-Stick which is 500 series.

I'm having an issue finding the latest firmware update: serialapi_controller_static_OTW_SD3503_US_WITH_BOOTLOADER.hex

Ah you want updated firmware for your chipset - apologies misunderstood. I dunno where that is.. I've only used replacement firmware for zniffing otherwise the usb sticks, in my case Z-Stick+ (500 series) and UZB-7 (700 Series) just work.

I also cannot find the correct firmware file or the zwave programmer software. Simply studio 4 doesn’t allow you to find and download 6.81.

Can someone share those two downloads? Would be great to update the zwave side of my USB stick.

Thank you. I see it has the firmware, but older. Hopefully someone can share a download or a link to 6.82.02.

Update: I followed the instructions and now have Z-Wave 6.09. Thank you for sharing. Always nice to squeeze all you can from existing hardware, even if it isn't 100% supported yet.

Many thanks! How the did you track that down? I looked for longer than I'd care to admit.

Used the way back machine.

I tried to find all the software but or I do not understand the instruction or I can not find them so instructions become useless... would anyone have all the windows packages needed ?
Many thanks for the instructions and your help
O

I successfully found all the software, followed the flash guide and validated that my flash was effective using PC Controller 5... But after performing this update, I no longer can pair (include) with any devices

Tried with ZwaveJS on a raspberry Pi first and then moved back to PC Controller 5, no matter what I do I can't get it to pair with anything. Sometimes after factory resetting one of my Z-wave peripherals (Innovelli lzw31-sn) I can get it to sucessfully exclude, but never include. 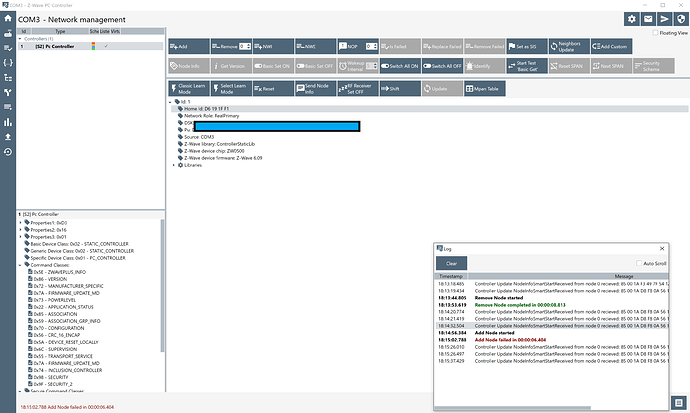 PC_Controller5_inclusionTest3528×2114 460 KB
Even after putting in the switches DSKs I can't get them to smartStart, even though I see the controller now is responding to those packets. 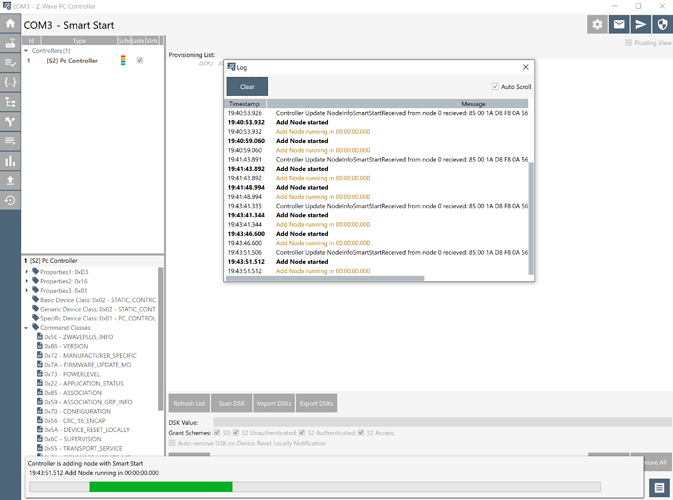 So did I mess up my device somehow? Should I try re-flashing it again?
I have all the backups from the guide above, not sure if that can help.

Are you using the Nortek stick or something else? What firmware did you flash on it? Typically no firmware updates are required for use as a secondary controller as far as I know - it should just work.

Also from the screencap you have not included it with HE as a secondary controller so would not be able to pair any devices to HE that way anyway. 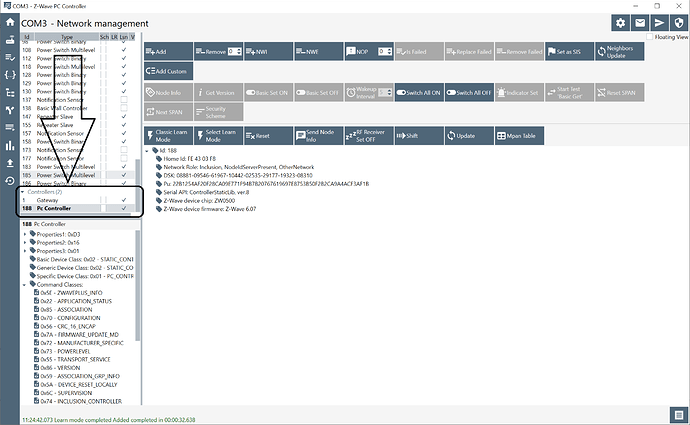 edit: I did try and use my old Nortek stick but that did not work with the PC Controller sw - maybe a usb driver issue or something dunno. I typically use either the UZB-7 or the Z-Stick+. The above screencap is a Z-Ztick+ paired as "device" on the HE with no security.

Are you using the Nortek stick or something else? What firmware did you flash on it?

Yes, it is a HUSBZB-1 Nortek Secure & Control stick and I installed the firmware mentioned in the OP of this thread SDK_v6_82_01\SD3503\ProductPlus\Bin\SerialAPI_Controller_Static\serialapi_controller_static_OTW_SD3503_US_WITH_BOOTLOADER.hex

I'm sorry if I don't follow, this is my first Z-wave device and my introduction to Z-wave networking in general. I'm not sure if I follow when it comes to the term "secondary controller".
I'll try to read through more of the Silicon Labs documentation, but I'm still a little lost;
Either way I see you have Network Role: inclusion in your screenshot whereas mine only says Network Role: RealPrimary so I can tell something isn't correct with my setup.

It's good to know that you can't get the Nortek stick to pair using the PC controller either, but what other tool should I use to try and get it connected if it isn't working in Hubitat or Z-waveJS?