I guess after buying and trying two different door/window sensors I need a recommendation on one that will actually work reliably... I want to go with Zigbee... and I'll pay... if it works reliably... any recommendations?

There is no home automation without devices featured in the next two categories covered by the "Year in Review " series . Today's episode brings the Most Popular Contact Sensors, followed by motion sensors, tomorrow. Vote now, for your favorite contact sensor. If your favorite device is not on the list, then select "Other" and drop a comment below, to share which device is your favorite. poll *for a complete list of compatible contact sensors, check out the "List of Compatible Devices ". Our …

While these aren't on the list that @danabw linked to, they are very good and inexpensive.

It ain't the most svelte or sexy looking, but I use a Third Reality on my detached garage's service door -- it's never skipped a beat out there.

In this case, I wanted a sensor that uses AAA batteries so I could easily power it with an AC/battery conversion kit (the garage sees seasonal temp extremes from -25F to 110+F). Appearance isn't important to me out there, just solid performance. The 3R sensor has been great in that respect.

You've used up your free question for the month of May. Please submit one six-pack of Root Beer to enable additional questions.

What did you try that was unreliable? Sometimes it’s just the controller mismatched to the device. Depending on your initial investment, how much you intend to spend to fix the issue, and purchase going forward, the solution will vary. 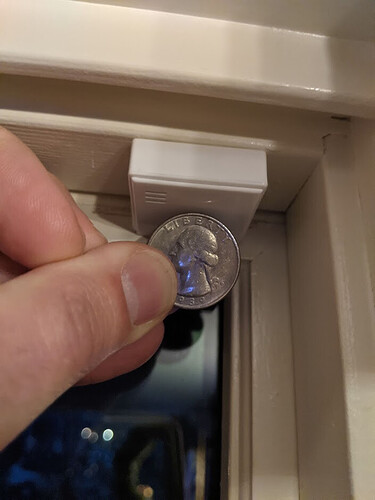 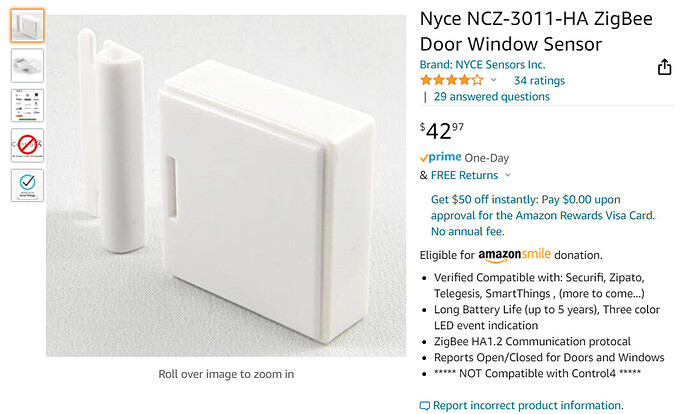 Sonoff and Aqara. I didnt do enough research and bought before I should have.

I have xiaomi and sonoff, xiaomi every two times three drops, and sonoff, I don't like the delay of 2 or 3 seconds that it has when opening

Should work without issue. How many zigbee repeaters do you have?

Originally I had the Sensative Strips Guard, which are Z-Wave. I liked that they could be completely hidden - they can be mounted in the frame of the window making them totally invisible from inside or outside. The pairing process, which requires waving a magnet around (as the units are entirely sealed), is a major pain but, fortunately, doesn't have to be done often. I joined them originally to SmartThings then moved them to a Hubitat C-4. When I installed the C-7 I left the Sensative units paired to the C-4 as I didn't want to deal with pairing them again. Anyway, the Sensative batteries, advertised to last "up to" 10 year battery life, all died within about 5 years. That put me on the search for something else. The Nyce sensors are just about the smallest I have found - I didn't what to have to drill the holes that would have been required for a recessed sensor such as the Aeon (I have one of those on my front door). The dimensions of the Nyce sensor allowed me to put them on the inside of the window and still clear the screens when those are in place.

I have been quite happy with the Nyce sensors - not quite as invisible as the Sensative but easier to pair and they have a replaceable battery. They have been in-place for 16 months now on the original batteries.

Aqara are actually excellent sensors, and will not drop if they’re on the right controller. Almost all my sensors are Aqara or Mijia. They are joined to a ConBee 2 stick on Home Assistant and then brought into Hubitat via Home Assistant Device Bridge. Very solid setup, and a lot more cost effective to add the ConBee 2 and HA, than to outfit your home with NYCE sensors. Nothing against NYCE, except the price (not so nice).

Sonoff do tend to drop if you have them too far from Hubitat. As @aaiyar mentioned, you will need repeaters for those. They probably would do better on the ConBee as well, but I only have a Sonoff motion sensor and its located close to the hub, so I couldn’t say for sure.

I am curious SmartHomePrimer why you run HA AND hubitat. Seem's like if you got through the learning curve of HA you would not need Hubitat? No?

I like the ST now Aeotec multi sensor, just the price point that's the issue. Used some rebadged Sonoff (Cygnett) as well that have worked ok.

• I like Rule Machine and Basic rules. No YAML
• I like having another hub for integrations that HA cannot match. The Lutron integration for example.
• Best way to control my Insteon devices.
• It’s great to be able to use Hub Mesh for distributing different types of devices across hubs.
• Backups work well.
• Moving back and fourth between versions works well.

It’s a worthy hub. HA is not much more than a device bridge for me.

Makes it easy to present devices to Google Home/Amazon Alexa as well, without a sub.

I don't feel I have a need for the extra bridge with the devices I have available in AUS, but it's a decent approach.

I am using Singled devices and so far working well.

BTW, in addition to the sensors mentioned above, there are also dozens of different makes and models Tuya based contact/door/window sensors that are produced under different white labels ( LIDL, Conrad in Europe, Mercator Ikuu and Brillant Smart in Australia, etc, etc.. ) that also work OK with Hubitat. Just checked Walmart.com and it is full of such contact sensors under different white label names.
I am not aware of any problems like dropping off the Zigbee network or similar. Well, the build quality is something that varies from model to model...