Hey everyone. I'm loving my Gledopto zigbee bulbs. Cheaper than chips (well nearly) and can connect to HE directly or via Hue Bridge at half the price of Hue lamps.

Does anyone have experience with their LED controller and their new remote and switch (which look very interesting and cheap!)

(click on 'add to cart' to see the remote and switch)

Was searching on the same place yesterday and I almost purchased them.
However, after asking several questions about zigbee protocols and RGBxxx protocols, changed my mind.

If you are buying new devices, I would stick to devices that are listed on the support devices list.

I will stick, even more expensive, to HE supported devices (because I want to change colors and brightness of led strips through HE).
I contacted RGBGenie to obtain a quote (it's for a stair project). Will post results if interested

This RGBgenie Zigbee 3.0 Controller is compatible with most Zigbee enabled home automation gateways, including the Philips Hue Bridge, Echo Plus, Hubitat, and SmartThings. Using 4 color channels, this powerful unit can add the right ambiance for any...

Yeah, but I bought 2 of the RGBgenie remotes and thus far I'm less than impressed. They seem to send colour commands to the first group/set which is pretty annoying. So I can turn the groups on and off, and all lights on and off, and dim (although it only seems to support 2 levels of brightness) but I don't have any resolution from their support yet for controlling the colour of lamps beyond the 1st set.

Hmmm, very interesting ! Will ask that question to the RGBGenie guy...

I did. He asked for logs. I emailed him to ask exactly what he wanted. No reply.

For the Gledopto, did you join flawlessly HE and you were able to fully modify brightness/hue through the dashboard ?

I'm interested for the led strips. The Aliexpress guy told me that's better to hook the strips in parallel to keep better lighting 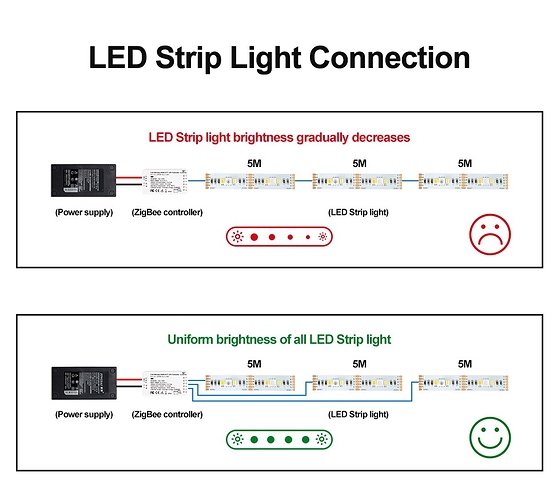 Bulbs yes. They work fine. I didn't buy the LED strip/controller yet. That's what I was asking about and their remote and switch. It's all zigbee 3.0 apparently so should work I guess...

I have one of their LED Strip controllers and it seems to work just fine for me so far. Just using it with the Generic ZigBee RGBW Light driver.

Great to know. Thanks. I will take a punt and get one I think. What power supply did you use?

Nothing specific to be honest. Just one of many I had laying around because I have used LED strips for so many past projects... Sorry.

I have the CCT strip controller and it works great, but does seem to be a terrible zigbee repeater - so make sure you have an otherwise strong mesh.

so you took the rgbw controller (and not RGB-CCT), like this one:

advantage of a RGB+CCT vs RGBW ? Is it better (why ?) to choose one or another ?

RGBW are just that....they have 4 leds per pixel. Red, green, blue and white. It generates different colors along the Color Temperature scale by mixing in the other three colors with the white. RGB-CCT have multiple white LEDs that are used to generate the different temperatures along the color temp scale. What is "better" depends on what you are going to use them for. If it is accent or biased lighting, even RGB leds will give you fine white color along the CT scale. If primary lights, I would pick something in the RGBW family.

You also need to look at how the pixel are arranged because that will greatly affect how they look. Some have all the colors in one pixel.

And some have them separated: 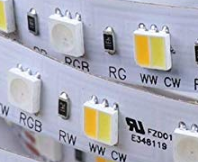 These will look very different depending on your application.

Just a simple way to put light under steps. I'm not that fancy, Probably some dimmed warm white most of the time.
And allow to control them through HE (sunset, motion).

The power supply should depend on the LEDs, not the controller. Most LED strips are 12V (but there are some that are 5 or 24). Controllers will generally support 12-24v strips. Longer runs or more distant ones, 24v can be beneficial (less power drop over distance) but the 12v are what most people will see and use.

You are talking about ~24ft of LED strip. Power should not be too high with that. Your biggest issue might be length. These LED strips all say they can be connected end to end, which is often OK for ones that pass data but not power/ground (which is the normal ones most of these controllers deal with). My recommendation, since you are planning on 12 different sections... put the power supply and controller towards the middle (if possible). That way you will only have it running ~12ft in either direction.

Personally, I don't use analog LED strips anywhere. Digital (individually addressable) are just much more versatile with what you can do with them. All of my strips are WS2812B because they are cheap. But it takes a lot more to get them working since they are more DIY. If you want something that is just going to work out of the box, I would to with analog strips and something like one of the Magic Home wifi devices that have a community supported driver for them.

Thx. I'll probably go for 24V and a palmtree pattern (in the middle of the stair) to shorten the wires. That would be ok because I don't need a lot of power and my room size is far from a cathedral 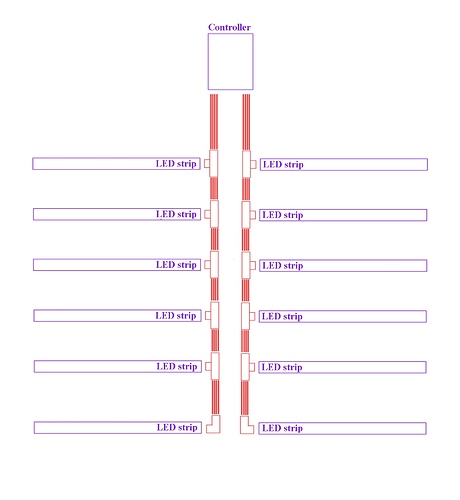 So many question I have in my head. Do you make the 2 connector strips yourself or can buy them? I've not seen such a thing. And can all LED strip types be cut to length and then the rest used if you solder wires on? Or there are connectors? I've never used these strips b4 and have no idea the best approach. There seem to be so many options/controllers/strips on Aliexpress that I'm now completely confused. 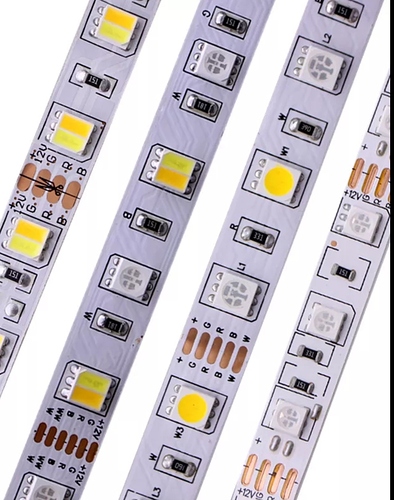 I'm thinking the one on the far right would be best, based on Ryan's post, since it seems to have an integrated LED (white doesn't appear to be separate) so I suppose the illumination will be more smoooooth... 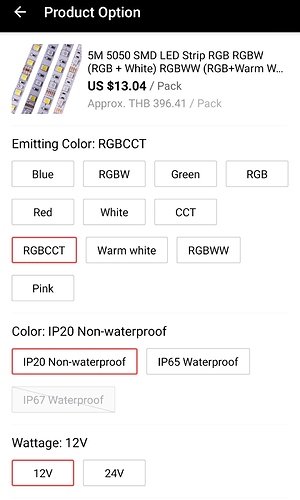 You can buy push-on connectors for the strips. 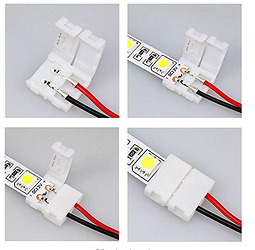 They come in different number of conductors (2, 3, 4, 5). But in my experience they don't really work all that well. I found it much easier to just solder directly to the strips. However, you have to be careful. The metal contact pads on the strips are not weight bearing. If there is any pressure against them, they will pull off the strip and then that pixel has to be cut off because you now have nothing to solder to. So, after soldering directly to the strip, some hot glue is a good idea.

Also, if they are going to be exposed at all, some heat shrink tubing around the solder point will clean it up and make it look less DIY.

If you are looking to smooth out the light and they are going to be exposed (seen directly) some channels with covers to diffuse the light are a good idea. You can get them in straight: 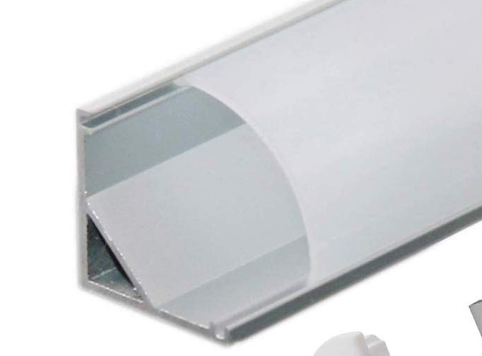 Also, consider how many pixel/m you will need. If you are doing biased/up-lighting, 30 leds/m will probably be enough. If you're talking primary lighting, you'll probably want more like 60.

I agree, I would always go with integerated pixels instead of the separate ones. The light is much more uniform and looks a lot better. However, the ones that have the two color whites separate from the RGB can produce all of the colors on the CT scale by themselves. So, to get white, you only need them and not the RGB pixel. So, it depends on how you are going to control them and what the controller will use to get you the colors you want. But to play it say, just use the integrated chips.

Obviously I've done a lot of research into these. So, don't hesitate to ask questions. I did a few LED projects around the house and learned more than I ever wanted to know about the damn things. Might as well put all this useless knowledge to some good,right?