Running a temp/humid device (successfully) using the z-wave generic temperature/humidity sensor to report back values, respectively. But the driver is flawed...

The device can be configured to report back on changes of 1 degrees temp or 5% humidity, which is battery efficient. However, since the maximum value i ever get is 90% (relative) humidity, as i have a rule set to engage a "humid flag" when the humidity exceeds 87%, when the humidity level reaches 87% it can therefore not report back a 5% increase, thus not triggering an action.

Can i hack the driver so it reports back 1% changes? The device allows this but the driver does not.

Is the driver code open to view/copy/modify any where please?

No, the code for built-in drivers is not available to users.

But not all devices necessarily have to use a generic z-wave driver.

Which device are you using?

Which device are you using?

its the everspring ST814 temp/humid sensor.
I found the page for the driver in these forums

Anyone up for some driver work? /** * EverSpring ST814 * * * modified by lgkahn 2015, added parameters for timeout, and temp changes, * also add color to battery percent, and icons for humidity and temp. Make primary temp display larger. * original timeout was 5 minutes .. This is too often when putting in cold environment like freezer. * That is why I made the timeout configurable. And also change the default to 180 minutes. * V4 some bug in recent release of smartthings ide made s…

It appears loaded with errors when i attempt to import it on a C7 hub running 2.3.2.141
if i was a bit more educated i might attempt to fix/hack the driver (found on that link) but that's beyond my knowledge at this time

According to your post in that linked thread, you appear to be trying to use a smartthings device type handler. It’s possible @kahn-hubitat converted it to a Hubitat driver and has a copy of the code available.

Even if he didn’t, you can, I think, correct those errors by following the advice in this old post.

At a minimum, you’ll have to replace “physicalgraph” with “hubitat” on any line that contains the term. That might be sufficient but I’m not sure.

It may sound intimidating or impossible if you’re not already a groovy developer, but I managed to do it for a couple of old devices back when Hubitat was brand new, and I have literally zero coding knowledge.

Speaking of old devices, FWIW I used to have a few of those Everspring ST814s but have long since retired them and moved on to other temp/humidity sensors.

They worked fine, but they’re really quite ancient z-wave devices, 300 series chipset, which predates z-wave plus, aka 500 series, which has since been replaced by 700 series chipsets, and 800 series already exists as well (but isn’t yet in commercially available devices AFAIK).

OTOH if a simple custom driver tweak gets it working as intended for you, they might still meet your needs.

ppears loaded with errors when i attempt to import it on a C7 hub running 2.3.2.141
if i was a bit more educated i might attempt to fix/hack the driver (found on that link) but that's beyond my knowledge at this time

no need to use that driver in hubitat.. for my st814 in hubitat i use the built in driver.. ie 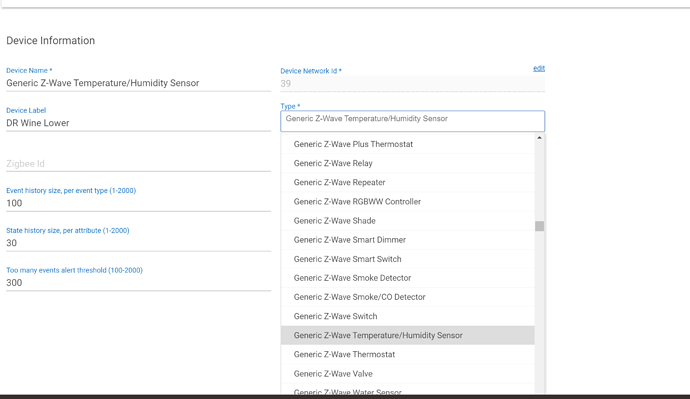 OP seems to be running into an issue with the generic driver related to resolution of humidity values close to the max reportable value of 90%.

They want 1% changes in humidity to be reported by a driver that works with the ST814.

Edit: apparently the device can report 1% changes, but the generic driver doesn’t allow for configuration of less than a 5% change. I don’t actually know whether either or both of those statements is correct, though.

no idea if it is work but i did convert it. also if you search for st814 in package manager it should be there.

@UkSub if @kahn-hubitat’s edited driver doesn’t get you what you need, consider posting a screenshot of your rule here and describe the use case a bit.

I’m guessing with a tweak to the rule logic , you can still make a 5% change in humidity work for your purposes. It’s very uncommon for a home automation use case to depend on a device’s ability to resolve humidity changes as precise as 1%.

As a work around, can you write a rule that'll trigger with humidity > 82% and run a while loop to refresh the sensor every X minutes unit it drops below 82% or exceeds 87%?

I think the problem really is that the sensors are not.sensitive enough for this situation. Even the st814. If you set it to trigger at only 1% change you would be inindated.eith messages as it constantly jumps around.

thanks for all of your help and comments. very much appreciated- All good valid info.
Even though the device is "old" it still serves well given the limitations stated. I actually have two of them running both with the inbuilt "generic z-wave temp/humid driver".

I did think of another workaround by using rule-machine to trigger the event if the humidity stays above 85% for a few minutes. At least that way i will catch the 5% change and be sure its not a false/brief peak.

Bizarrely, i dont recall it being an issue with my old vera system (using similar values and execution code) but maybe i had the device updating on a time basis rather than a climate change (which is still possible) it was ten years ago when i set that up.

TBH i'm a bit scared hacking the driver code- dont want to introduce problems in HE. Not sure how resilient HE is with bad code or if it would cause system failures or, worse still, brick the unit.

Speaking of old devices, FWIW I used to have a few of those Everspring ST814s but have long since retired them and moved on to other temp/humidity sensors.

i am using these and the battery life seems to be comparable once you turn the checking time down.. they have at least lasted about 6 months in my wine fridge.. havent tried one in my freezers though as i still have the st814's

I dont think anything can compare to those for range and battery life given they are large and have 3 aa batteries.. especially when you use energizer lithium i have now tried smaller both acqara zooz and other sensors.. probably about 6. and the ones with smaller batteries just dont last in a cold environment like a wine fridge.. 1-2 months at most..

make sure you get the 700 series above.. the older 500 series that look the same ate batteries due to frequent reporting.

TBH i'm a bit scared hacking the driver code- dont want to introduce problems in HE. Not sure how resilient HE is with bad code or if it would cause system failures or, worse still, brick the unit.

You don’t have to hack it yourself to try it out, @kahn-hubitat posted a version above that should resolve the errors you posted (I think. Again, not actually a developer here

I’m actually a huge fan of the Ecowitt weather station and its indoor sensors (which include temp/humidity among others). They use their own wireless protocol at 915 MHz (in the US, other frequencies in other regions of the world). There’s a wifi bridge device that’s needed to use the sensors and integrate with Hubitat, but IMHO they’re well worth it, even if one doesn’t intend to use the weather station components. The whole system is modular, so it’s possible to purchase just the wifi bridge and indoor sensors, if one’s so inclined. I highly recommend them.

You don’t have to hack it yourself to try it out, @kahn-hubitat posted a version above that should resolve the errors you posted

thanks for that- i missed it first time round or looked at the wrong link/code.
Loads into HE nicely. Will have a play with it over the coming days.