@SmartHomePrimer I am sure you probably have seen this one and cringed at the price. But it is the only one I have seen that can handle that kind of power. 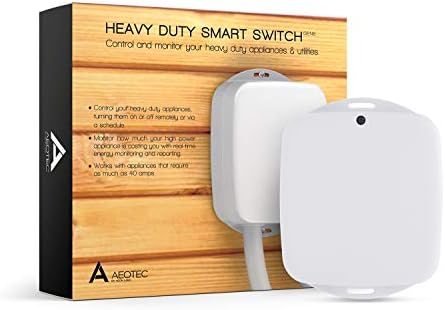 Here is info from Aeotec.

@SmartHomePrimer Yep I have 2 of them. I use them to turn off the power to my garage door opener motors. It is just for when we would go on a trip I can remove power to the motors so the garage cannot be opened at all.

I use this with my electric dryer for power off notification to Alexa TTS. Pricey, but it works reliably. Custom driver available in Community to monitor power.

This is a driver for the Aeotec Heavy Duty Smart Switch (Heavy duty Z-Wave switch for indoors & outdoors) model ZW078. It's a port of the Smart Switch 6 code with appropriate functions add/removed. You can safely use the built-in HDSS driver for this device, but there were a couple of functions missing and I didn't like having dimmer and color settings on the switch controlling my dryer, even if the device would ignore those commands. Edit 5/14/19: (This is now a whole new device driver since…

Thanks for the reply. I use the HS-LS100+ as a vibration sensor and the HS Flex Sensor for temp. The 2 combined give a very accurate depiction of when the dryer has reached a spot to go fold the clothes before they wrinkle. I just need to get a more modern dryer that has a simple LED that shows on/off then I can use the HS-FS100+ like I use on the washer!

I tried a Smart Things multi sensor that does vibration first for the dryer. Couldn't get it to work well because the adjacent washer would activate it. There was no sensitivity threshold adjustment.

I have three of these and have had great luck with the first two.

I found another driver to use on the ST forum that only needed a find and replace, and gave that a try. Power reporting still didn't work, but the other driver reported back that my new switch was on firmware 1.4, which is a new firmware that became available 2 months ago. My Zooz zen 15's that are working good are firmware version 1.3 . Zooz sent me what they called a "Pre tested replacement" , which arrived today. Still no energy reporting using the Hubitat driver. Switched to the other driver and verified this replacement is also firmware 1.4 . Not sure what to do now. I think I am going to ask Zooz if they can make firmware 1.3 available to me. They seem to think it is a problem with initialization when joining to Hubitat.

Did any of you have similar issues? 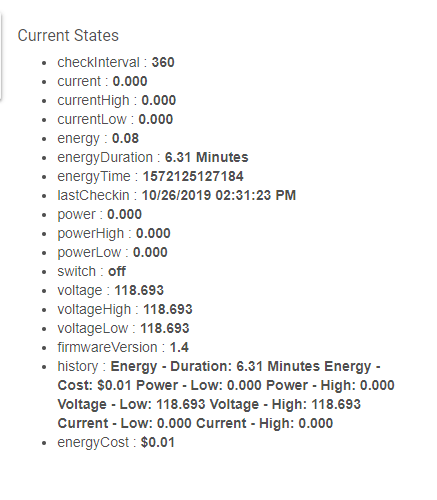 No issue at all. Joined no problem. All reporting just fine. Sorry I don't know what firmware it had, and I just sent it back. It's great and all, but now that I have changed over my dryer from using one of the CT clamps on my Aeon HEM, I had that second clamp available, so I decided to use it with my Microwave instead of the ZEN15. Was going to use it on my dishwasher, but I then realized that I don't really care when the dishwasher is done. It's so quiet, we can run it anytime we feel like.

If I ever need an energy monitoring outlet though, that will be my go-to for sure.

Thanks for your reply. I figured it out! I have removed and repaired this Zen15 around 20 times with no luck. I didn't have it connected to a device during pairing, just plugged into the wall. This time I connected my coffee maker, so it would have an electrical load before pairing. Paired with the switch on. Its now reporting power!

That’s really odd, but I do recall an issue now that you mention it. I forget exactly what it was, might have been reporting. I know that sounds weird after saying I didn’t have issues, but I’ve been doing some of this on little sleep too.

What is your advice as to the best way make these graphs recording power, current, etc.?

I use the InfluxDB Logger:

Contribute to HubitatCommunity/InfluxDB-Logger development by creating an account on GitHub.

I unfortunately have ended up with a fork of it, it adds features for measuring latency, maintain stats and a different approach for reducing load on the hubitat: 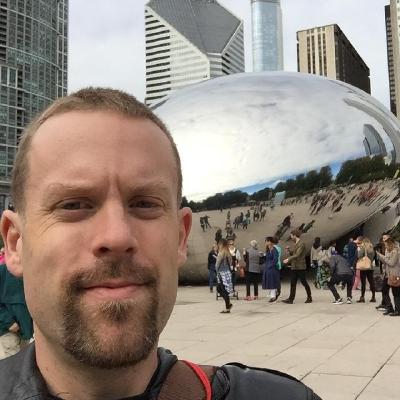 Contribute to as-j/InfluxDB-Logger development by creating an account on GitHub.

If you're running a current release I've started developing a logger using the Maker API. I'll be honest, I like it since it's not a User App and can't be blamed for slowing down the hub. But I'm not sure how "light" of a solution this is if you have a device sending events 1/sec:

2.1.6 Added a nice improvement to the MakerAPI which brought in an official push method, vs WebSocket. Since people have always worried about the InfluxDB Logger user app causing hub slowdowns*, I thought this would be an interesting approach to send data to InfluxDB since it avoids using a User App on the Hubitat. Code: hubitat-maker-to-influxdb - npm Warning: This code is very alpha, I've been running it for a bit, but it's not even my main feed of InfluxDB graph data. I'd love to get feed…

i have the same problem as you but in my case, even after putting a load on it and pair it, it never reported Current and Power. Contact Zooz, they said that they never saw that and to return the defective unit.
Firmware 1.4
i have 2 Zen 15 with firmware 1.3 that work very well
hubitat 2.1.7.127. Try on my 2 hub
i have try with this driver Sump Pump Monitor
and the built in driver
secure and in-secure
reset to factory default
after a week of testing, i have no other choice than return it and hope that the next one will be FW 1.3

Have you been able to "collect" power consumption over a period of time and have it reported thru HE? I'd like to have HE tell me how much watts were used over a set period of time.

With my Zen15, i can see in the driver

[Release] HubiGraphs 4.0 - "Back in Beta" Developers

Hubigraphs V3.0 Release Release Notes 9/17 - Version 4.0 - Weather Tile 2.0. Alright, story time. My wife HATES WeatherTile 1.0. She says that is is not organized the way she want. I asked her to design the tile she wanted. She did. 8 hours of HTML grid coding later, she changed her mind. After that she gave me three other designs. So... I have been working for the past month on multiple rewrites of Weather Tile. I am pleased to announce the following features: Native support for O…