Dear god please a simple solution for my pool temp

Holy cow on a popsicle!
I thought "Outdoor water temp z-wave" or other such google term would easily pull up a device I could use.
Or "Z-wave weather station with water temp probe".
If you've been down that road - i feel you.

It turns into much more of a "that's a digital probe not analog" followed by "well if you just hook up a flux capacitor in line first you can read 85 flugers off the hippin hoppin the you can aggregate the bell curve of 4 sensors and a turtle to get what you need'.

I'm currently at the point of thinking of using a Fibaro RBG 2 so that I could also control some lights around the pool and add a air temp sensor. But sweet jibbers after reading a billion posts I'm still not sure exactly what probe sensors work .

Has anyone found a simple device , or have a buy X + Y and connect like so.

It feels like a waste to buy a 4-in-1 sensor just so I can get a temp out of my pool.

Maybe look at this thread...

I am interested in being able to receive alerts if my Aquarium water temperature is outside of normal operating range. Does anyone have hands-on experience with any of the options out there? From what I have read, Fibaro makes a contact sensor and an RGBW controller that can accept an optional temperature probe. Any other solutions? Thanks!

With Hubduino, you could have multiple temperature probes, one for water, one for air and whatever other probe, relay etc. connected to it. Sure it's WIFI but you should be able to pull this off for a minimum of $$$ if you are tech inclined.

For my Aquarium I am using a Qubino Thermostat Module with temp probe.
Works a treat using the built in HE driver.
Maybe you could do something with this device.
It is z-wave and mains driven so you will need a source of power.

This is the device I am talking about. 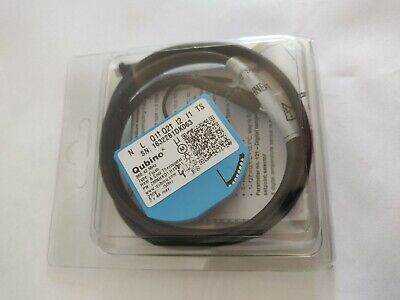 Find many great new & used options and get the best deals for Qubino Flush Heat & Cool thermostat module + Probe (Z-wave Plus) ZMNKHD1 at the best online prices at eBay! Free delivery for many products!

I really am not sure,. I didn't think of the battery use case. The old fgk-101 which was mentioned above worked with a 3v battery, worked well on Vera, but burns through battery on HE. I am using the pre-decessor of the smart implant for temperature. the fgbs-001 but with powersupply.

I had the exact same issue when I was searching for a smart solution to see my hot tub temp, maybe 3 years ago...? (here's the link to my 'sussed it!' post over at smartthings - (Working ) Smartthings Hot Tub / Aquarium / Whatever water sensor - Projects & Stories - SmartThings Community).

After a hell of a lot of trial, error, learning and tears - this is the crack =p
Much cheaper than the fibaro. I find it works great!

Install the konnected software, flash the nodemcu. Works to perfection.

Here's a snippet of my setup... 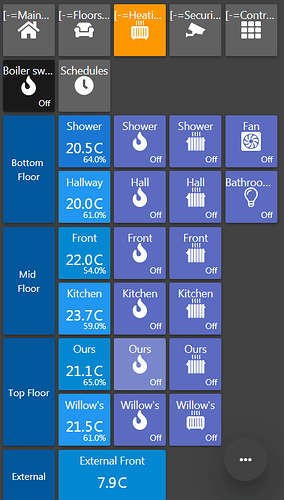 The 'external front' is a waterproof ds18b20.
Each of the internal temps are DHT22's (humidity too, from those).

Each floor is powered by an individual nodemcu.
Radiators are opened/closed by the nodemcu with a 3v relay & ac thermal actuator.
CH boiler is connected to a cheap-as5 zwave switch, which fires up the CH when webcore tells it to.

Very cool.
I will look at that. for sure!
In a fit of "fuckitwhatever" I bought a sensitive stick and some chlorine resistant epoxy. I'm sure pics worthy of https://www.reddit.com/r/DiWHY/ will be forth coming to this thread.

How long have you been using the DS18B20, and how has it been holding up?

That's what I use to monitor water temperature for my DIY pool controller, but I'm having to replace them more frequently than I'd like.

Maybe it's because I'm getting cheap knock-offs from the cheapest Amazon/eBay seller I can find, but the ones I've been using start rusting and eventually stop working in the pool water (chlorine, and now salt). It seems like I have to replace one every year, the last one I replaced I dipped it in PlastiDip to see if that helps.

Full disclosure though, I went through a hell of a time with the in-house sensors. Originally I had 1 Fib per floor plus one outside. I have low voltage wires running from my workshop/attached garage to each of the 3 floors, and used network cable to daisy chain the 3 or 4 sensors for that floor together.

I had so many random dropouts it drove me insane. Eventually the guys who wrote the DTH's for the implant/ubs tweaked it for me, to essentially 'fake' a change in temp by 0.1 degree if there wasn't actually any change after x amount of time. On the following cycle, the 'fake' temp would be reduced back by 0.1 degree again, which fooled smartthings into thinking there was a regular fluctuation in temp, which then allowed me to knock together a bit of webcore logic to detect whether any of the probes had locked up. The only solution was to pull the power. So....in the event of a lockup, I had webcore power cycle the outlet for the fibs DC psu.

Massive pain in the arse. Never did get to the bottom of it.

What I can say though is that right now I'm using my ds18b20s with the nodemcu over a distance of around 10m, no issues. But the response time is far longer. I had it set to something like 30 secs with the fibs, konnected is a few minutes. Perhaps the shorter polling time was the downfall of the old system, it was very difficult to troubleshoot. Just when I thought I'd identified the reason (swapped wiring, swapped psus, etc etc) it would work for a few days and then screw up again.

I went low tech and put a Zigbee Ecolink contact sensor ( it does temperature reporting) in a small plastic jar which is slightly weighted with an old fishing sinker. It bobs around inside the skimmer box sending temps perfectly.
Finding just the right weight to keep the jar vertical took 2 attempts and I’ve got the sensor sitting on a wee block of foam inside the jar, just to ensure it remains above the water surface.

My biggest issue was strengthening my Zigbee mesh so it was able to get outside my house.

No reason you couldn’t use a Zwave device.

I've never had an issue with dropouts or lockups, but I've only got two 1wire devices. The first is about 15-20cm away from the controller to monitor the temperature inside the enclosure, the second is about 10m away in the pool. I don't poll them very often either, they both get polled and logged every 30 minutes, and the one in the pool gets polled periodically while the controller web page is open, maybe once a minute?

If I could keep the one in the pool from rusting, I'd be in good shape.

I used the 1wire temperature sensors in electrolysis tanks to automate the cooling. I used heatshrink tubing just slightly bigger than the sensors and sealed the ends with silicone clear sealant before I shrunk them.
Now these are used at temps of 50-60degC in producing sodium chlorate weedkiller from pool salt and the solution can turn very alkaline and caustic if hydrochloric acid is not used to keep pH neutral. I have had no failures so far, In fact I used a spare one that had been running in the solution nonstop for 3 months after removing the heatshrink, on the fibaro device. No rust, still shiny.

Thanks for the tip, the PlastiDip experiment was not a success, the sensor only lasted one season. I'll try the heatshrink/silicone method this spring. I think I'm going to have to order more of the sensors as well, maybe I'll get a more durable batch this time.

this is avail now for the ecowitt weather station i use it outdoors for my hot tub.. i did put in in a ziplock bag even though it is rated for outdoor use, to be careful, but it has been working fine. 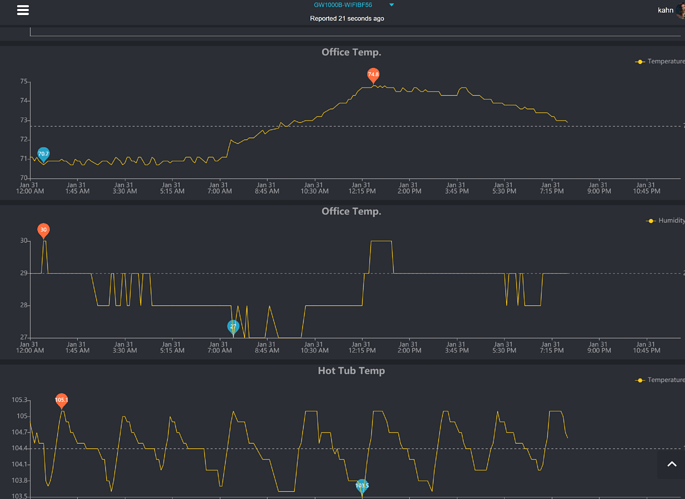 I went low tech and put a Zigbee Ecolink contact sensor ( it does temperature reporting) in a small plastic jar which is slightly weighted with an old fishing sinker. It bobs around inside the skimmer box sending temps perfectly.

Brilliant. I've been looking for a way to hook up a wired probe to a Zigbee or zwave battery sensor. Fibaro no longer makes the contact sensor that accepts a temperature probe and the Aeotec device is line powered... not ideal for a hot tub. I read your post and said "aha!" I took a small Tupperware container, filled it with some 00 buck I had lying around, and plopped a dirt-cheap SONOFF sensor in there. Took a bit to get the buck right but it seems to be working just fine and connected to my Zigbee network without any issues. May not last forever but it sure seems to work.

Nice. Your “floating sensor’ should be fine.
Mines coming up to 6 months without any issues.
I’ve checked it weekly for leaks or anything internal condensation but it’s stayed dry ! Requires an Ethernet Tag Manager.  Outdoor Probe Basic supports connection of either a DS18B20 waterproof  temperature probe or a SHT20-based temperature+humidity probe such as SEN0227 and other compatible SHT20 based...

You can also dip your sensors into the genuine 3M Marine Adhesive Sealant 5200.
It dries very slowly (1 week) but last forever. You can build multiple layers (dip/dry/dip/dry).
Of course, the reactivity is a little bit slow (no metal - just insulation) but enough for a slow response. Ideal for checking temperatures along the day.
I have multiple ds18b20 sensors placed in water/pond/soil/machines for years, without a problem.

Every boater knows this product well. It's messy as hell to work with, but it does not come apart. Ever.

This looks like a good option! If I read the details, this requires their tag manager "hub," which says it is dependent on an internet connection to work. Or maybe just configure?