I'm using Caseta dimmers, due to high recommendation here. The problem is that something seems to not properly work with the Motion Lighting app to implement the "Don't turn off if already on" function. I turn on the lights manually and get into the shower. The shower door is just enough of a barrier that I'm not sensed and the light times out and goes off in the middle of my shower (even though I had manually turned it on).

I know I could just add another sensor and program it into the additional motion devices to prevent turning off..". I want to understand what is not working properly, because I have installed the same arrangement throughout my entire house. Obviously having the lights go off in the shower hasn't helped get my wife excited about the automation and Hubitat project. Lol.

I'm including screenshots of the log file as well as the app settings. You can see that the lights are being turned on manually by the Caseta dimmer, but being turned off by the automation app. 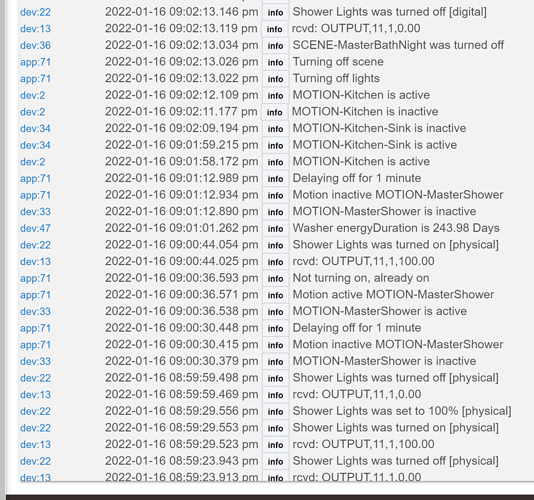 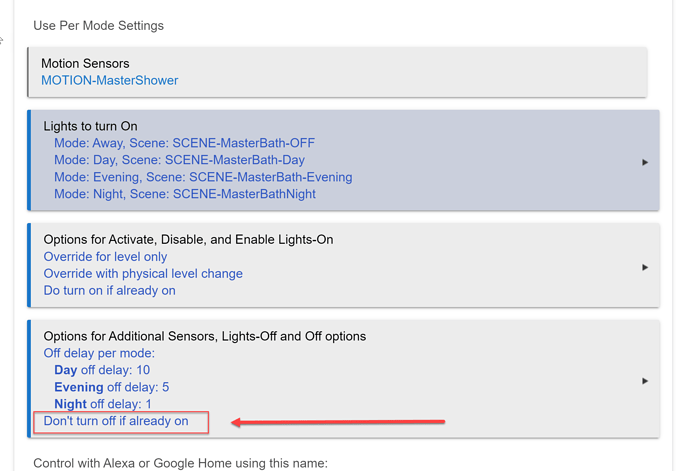 So this is what I do with the bathroom. My sensor has the same issue, I was considering putting one in the shower proper. I ended up taking someone else's advice. Trigger set scene as a required expression will halt the general rule. Turning off the scene allows the rule to run again. This way while the scene is running the motion detector isn't in play. But when I turn on the vanity light or hit the button on my dash it deactivates the scene and things return to normal..

How are you able to manually turn on the light if it's motion sensed? Aka are you somehow able to hit the switch BEFORE the app turns on the light?

Sounds very similar to the issue I'm having with a Lutron dimmer and Motion/Mode Lighting.

It doesn't seem like an issue with the sensor itself. The way that I read the description of the app function, it should ignore the off signal from the sensor because it was on previously. Are you saying this is because I'm using scenes and if I just triggered direct levels it would work? I'm trying to stick to that particular app because I'm a newbie and I think that rules may be over my head to go running around programming all the lighting zones in my house.

Yes. I'm manually turning the light on, so based on the settings in the app, it seems that it should ignore the sensor state to turn the same lights back off. Not sure if it's because I'm triggering scenes. Here's another screenshot showing the Caseta dimmer to turn on (1) and the sensor trigger turning off right after (2) 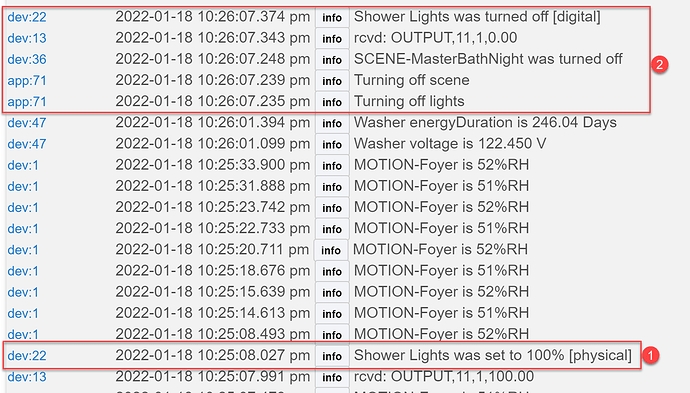 No need to use rule machine for this.

Go to this sub-menu: 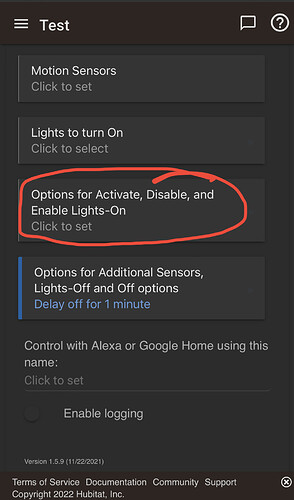 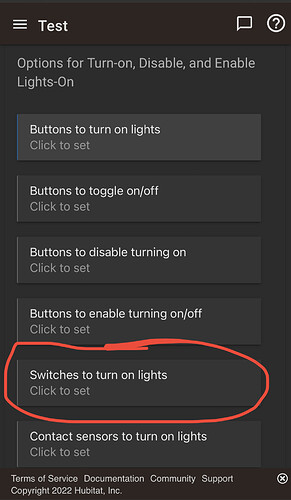 And select the lights that you’re automating with motion.

Essentially, if you ever plan to control the light manually, you need to select it here, otherwise motion lighting doesn’t “know” that you manually turned on the light.

Do the same thing in the “off options” sub-menu if you ever turn the lights off manually too.

This is really helpful, but I'm turning these on directly with the Caseta dimmer and my understanding is that the only way Caseta is available within Hubitat as a Button Press is via a Pico. It seems that the Caseta triggers are available within HE, but only as some form of signal, not specifically as a button press, although I'm too much of a noob to understand the difference. In the list on that page, I just have a bunch of Picos and a bunch of Scenes. There seems to be a bit of a rub with Caseta that you need to trigger things with Picos in HE, although they are so popular here I'm assuming I must be missing something. It would seem like I would need 3 and 4 gang plates full of dimmers that I don't use all over the place, just to have a pico in each location that triggers scenes based on modes (which is all I'm really trying to do with the motion sensors). 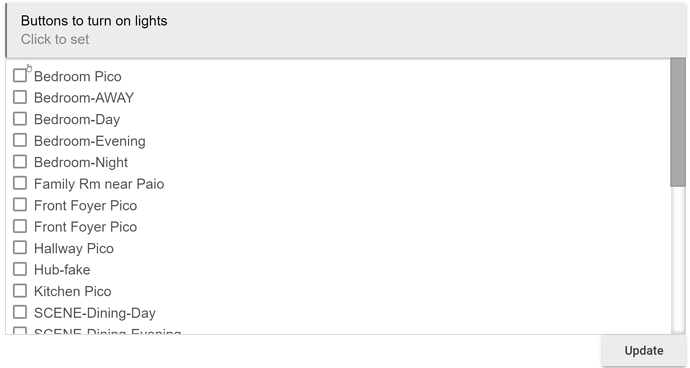 Let me see if I can simplify this for you. All the Caseta Switches/Dimmers/Picos need to be joined to a Lutron Smart Bridge Pro. Then use the built-in Lutron Integrator to add them into HE, so all devices are now available to HE.

This is really helpful, but I'm turning these on directly with the Caseta dimmer and my understanding is that the only way Caseta is available within Hubitat as a Button Press is via a Pico.

It’s a bit odd. But you to have to tell this specific instance of the motion lighting app that you are using the physical switch to turn itself on (and/or off), in addition to using motion (or in some other cases, buttons).

Ok so this rings some bells. I had Motion Lighting rule that was pushing buttons vs turning on actual lights. Bruce eventually led me to the answer which was that ML doesn't really know that anything is "on". So I created a virtual dimmer that I also used in the ML routine and things behaved as expected.

In your case you are just using "scenes" so I don't know if that will work for ML to follow. @bravenel can probably answer that. But just to see take the Casteta switch you are using to push the button on and actually put it as a dimmer in ML. See if things work as expected then.

In your case you are just using "scenes" so I don't know if that will work for ML to follow.

I missed that initially. Yeah what I said above assumed the caseta device directly is being activated by motion too.

But scenes have activator devices. If OP uses that in this ML automation, along with what I suggested above, that might work?

But scenes have activator devices. If OP uses that in this ML automation, along with what I suggested above, that might work?

That's the part I don't know. But putting the actual dimmer in there will tell us something.

I'm having very similar issues with a Caseta dimmer and Motion/Mode Lighting, without Scenes.