Can hubitat scale to a lot of devices?

Hi there. I am considering moving to hubitat from Homeseer, where I have a large number of devices. Maybe 16 Zwave devices, about 40 zigbees, 6 thermostats, 30+ Google hubs, chromecast audios, and Nvidia shields, but a few hundred lutron QS lights, shades and occupancy devices.

I am more comfortable running on server OS as I am an IT professional, but Hubitat has a lot of great device and community support, and HS is having issues with their Google home integration now and can't seem to fix it.

Is Hubitat able to scale well and be really responsive for a portfolio of this size?

There is a limit to the # of z-wave per spec something like 232 or so (I think), Zigbee is limited to the amount of hub resources (with 32 end devices connected directly to each hub) and not sure about the Lutron stuff BUT the good news is you can go to a multi-hub configuration if necessary. You would use HubMesh for inter-hub communications OR set up a companion server like Node-RED as a master controller.

I have a 3 hub setup - C-4 for cloud/Lutron devices, C-5 for Zigbee devices and a C-7 for Z-Wave. I use Node-RED to handle all the rules and communications. Works great, keeps resource usage low on the hubs.

You can also set up multiple hubs by location instead of protocol type which I've done for a few of my residential clients and that works really well too. Note: for those use-cases it was due to devices being far enough out of range to make things unreliable (like for a detached garage) not the quantity of devices.

All being ran into Node Red for rules and communication.

Although seeing that you use a big portion of google devices I would recommend reading the many threads on this forum regarding chromecast integration which has been "beta" for 2 years now, to get you a better understanding of what you may/may not be up against.

Note: I recently installed a system with over 100+ Lutron devices, and a few zwave/zigbee. One hub, no issues.
Don't forget that you have to get a lutron pro 2 bridge.

I guess I'm the odd one running it all on one hub. The limit of 32 zigbee from my understanding is 32 per repeater but no hard limit with enough repeaters. 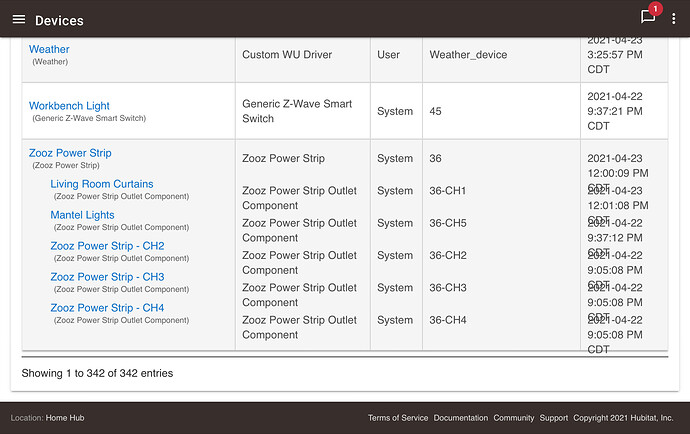 Yep that is my understanding as well.. which means you can have a lot of Zigbee devices.

I'm not sure what the resource usage impact is on HE for each device of any protocol is though.. that may be a limiting factor too.

The limit of 32 zigbee from my understanding is 32 per repeater but no hard limit with enough repeaters.

The limit is 32 devices if you DONT have any repeaters, repeaters generally will carry 7 to 11 devices each, and dont count against the 32 device limit on the hub.

There is no hub based limit on the number of Lutron devices. I have approximately 180 on my hub.

I think this is largely based on the type of devices you have and the driver software for them. I have a few wifi based devices that if i had allot of them I could see being a problem. Something like Lutron with Pro hub I would speculate would far less impactful. You also don't want to underestimate the impact of user apps on the hub as well. By far the biggest impact on my hub is the Ecobee Suite app. When you look at how much load that one user app puts on the hub there is do doubt of the impact user apps can have over simple automation rules. If anything from the few times I have asked this question it depends on your overall setup and no one rule applies to how many of something the hub can handle.

As a general statement though I would say any Wifi or cloud device like Ecobee Thermostats, wifi Bulbs or speakers, or Roku's will take more cpu cycles then directly attached Zwave/Zigbee devices.

The good thing is that you can see that info now on the logs page with App and device statistics so you can see if you are starting to overwelm the hub in some way.

My suspicion is that if everything was kept local on zwave/zigbee or local network hubs like lutron/Hue the Hub can support allot more then we give it credit for.

My only suggestion would be if you have a bunch of Cloud/wifi devices or apps that will work with Hubitat, put them on there own Hub device once the scaling starts to become an issue. The point that will be a problem is largely dependent on your setup.

I agree.. and it's what I do as well. It can be helpful to isolate the cloud stuff.

I recommend and provide setups for my residential clients and will not think twice about adding a second or third hub in order to reduce overhead or connectivity issues. I mentioned this a little earlier but have a client with a C-7 main hub and a C-5 secondary. Added the C-5 to their detached garage (it's wired for ethernet) due to having difficulty pairing and controlling devices there. Instead of trying to futz with repeaters etc to try and improve stability simply added another hub and everything started to work reliably and with fast responsiveness. Suspect it also helps the main hub as well. The downside is there is now a new potential failure point of another hub.

Thanks everyone. It sounds like most of the devices would be fine, but I could have issues with dealing with 35+ Chromecast devices to keep track of and manage? Also, I have about 120 zones in an Elk security system that I use for making decisions, like shutting off the HVAC in rooms where a window is open, etc...

I'm still trying to get my head around how rules work in Hubitat - HS was pretty easy to do most things without having to write scripts, etc... Can rules process events and inputs that cross meshed hubs?

The short answer is yes - when you use HubMesh you share your devices between hubs - they show up just like normal devices so RM works with them in exactly the same way. The larger the setup the more complex this might become to manage. An alternative would be to use a central control server like Node-RED and hook up all your hubs etc to that and build your rules (called sequences) there. That's what I do.

Folks, thanks for all the advice. I got the hubitat connected to the Lutron bridge just fine, and it's getting state updates just like Homeseer does, but it appears that I would need to create all the actual devices manually. I have a couple hundred devices, do going back and trying to do this manually is very unappealing.

The Homeseer plugin reads the names and states of all the lights, keypads and shades, and creates all the devices automatically. Is there a way for the plugin to do this? Otherwise it's really a painful process to integrate things for a large system.

Otherwise it's really a painful process to integrate things for a large system.

That would indeed be very painful. I would recommend following the steps outlined in the Hubitat documentation. Importing all your devices becomes a single copy & paste. Pay particular heed to Step 5.

Lutron itself had a limit of 75 devices per Lutron hub

Yeah I realized that and deleted my post but you were too fast for me!

So when I open my Lutron app, and go to advanced, there is no integration report option. Maybe it's there for the Caseta version, but not the QS version. Or maybe they removed it in a later release after the instructions were done.

What kind of Lutron system do you have?

I have a QS system. 2 processors, and a bridge. The Lutron connect app (called Lutron Connect-RadioRA2 + HWQS in the play store) on the phone is version 7.6.2.1, and runs on android and was updated on May 20, 2021.