Aussie PW2 Owners - Does it backup your whole house?

G'day all, I recently ordered a PW2 via AGL and Im looking forward to getting it RSN.

However, one of my mates recently had his installed and apparently, they would only install it across 4 circuits of his choosing - has anyone else had this happen? Seems quite odd to me - especially as he isn't on 3-phase (AFAIK).

Wait - you have residential 3-Phase power in AU? Very impressive!

Yes, it’s not standard but folk with huge ducted AC systems tend to upgrade to 3 phase.

It does make distribution more efficient

For sure - we have 3-Phase in every residential street with most houses being connected to alternate phases.

The only exception is country areas, some of the really remote ones have only a single phase and use the rather bizarre SWER (Single Wire Earth Return) system (it's a real bushfire hazard).

US person here. There may be some confusion on how the system operates (as explained to me - check this).

The limitation is the power inverters in the PW. Mine has between 30 and 40 amps of output. The backup sub-panel is designed around this capacity plus the equipment installed on the circuit and how I use it. therefore, I have limited on mine (garage (for internet modem, garage opener), refrigerator, water heat control, HVAC Fan, Den lights/outlets, and kitchen outlets. This provides me with 24 hours of essential and comfort services plus entertainment (I have internet and TV included in this budget).

Think of the PW as having 3 modes: charging, normal utilization, and off-grid utilization.

Cheers for the explanation. Our house rarely draws more than 5kW of Power (max load for Aus spec PW2), except in summer when it can occasionally hit ~6.3kW of load for brief periods (sun is normally shining and both AC's are running).

So I'd have thought we could backup our whole house - most of our big power outages are in the winter so the PW2 would only be driving the Gas Ducted Heating Fan and normal household appliances during an outage.

I would read the manual. Below is a good description of how my system works. Just take out the Solar Panels, and you have a simple power-wall.

This is how I assume mine will be installed as the site survey Electrician didn't say anything about needing a sub-board (I have a 5.4kW Solar array with 5kW Fronius Inverter): 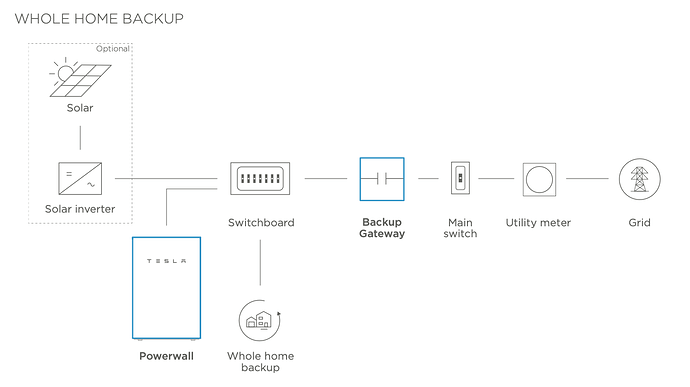 You do not need a sub-panel for a whole-house backup. An option is to have one so that critical circuits will have more power available longer to the critical circuits (at the expense of the other circuits). Both methods work. (Note that in the Summertime, my peak usage is when the AC runs. This would wipe-out reserve storage at night in about 5 hours,)

Off topic. Where in Australia? I spent 12 months in Melbourne and 2 in Adelaide about 15 years ago. REALLY LOVED IT.

You do not need a sub-panel for a whole-house backup.

Agreed, apparently, you do need it for partial backup: 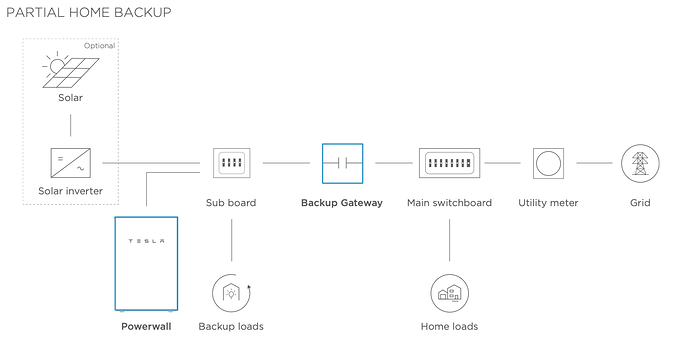 Off topic. Where in Australia? I spent 12 months in Melbourne and 2 in Adelaide about 15 years ago. REALLY LOVED IT.

I'm in the outer eastern suburbs of Melbourne and I love it. I was born and raised in Adelaide (nice city, just not enough employment options for me) but have spent 15 years in total living in Melbourne. I spent a few years back in Adelaide in the middle of that period tho and I've also spent time in Sydney (didn't like it very much).

I have PW2 which provide backup for whole the house except the A/C which is 3 phase. Nevertheless, I wouldn’t back-up the A/C anyway.

Also, the panels on the red phase ( I use panels with micro inverters) are able to charge the battery and feed the house when disconnected from the grid or during a power outage. I am quite happy with my setup.

I got my PW2 install date today, it’s coming in the 25th!

Honestly I’m ok with this being the case for us too.

I had a PW2 installed just over 2 years ago in Sydney from a reputable local solar company. My entire house is backed up including my central air (which is 12kW single phase). The circuit limitation I assume is more to do with the AGL offering (and fixed pay to installer) than anything PW2 related.

The backup gateway should come with the battery, as this is where the smarts are between the home system and the grid. No "sub panels" necessary during install. Like bogdan's install, my Solar can charge battery/run house during a power outage.

During the few power outages I have had in the last 2 I've never gone over the 7kW peak even with the ducted A/C going. I would only go over this draw with the AC + oven/cooktop on blast.

Also, if you get a Fronius or similar inverter that offers "pro" "premium" or other such paid subscription to track energy usage / weather predictions etc, I would say don't purchase these as the PW2 has everything you would want to track including a newly added "Energy Value" which is the amount you 'would have' been charged if you had drawn from the grid instead of the PW2. Also many integrations for better tracking/graphing.

Happy to answer anything about the setup/running if I can.

The backup gateway should come with the battery,

Yep, mine comes with the gateway v2. Apparently the circuits that are backed up during a power outage are moved into the gateway (this is what they did with my friends install). Apparently AGL & Tesla won’t let you have more than 4 circuits backed for “off grid” running, but the PW2 still covers the whole house under normal running

I’ve no idea how they do that, but whatever.

I’ll be happy to have all the lighting and power sockets backed up so we don’t get food spoilage or freeze to death during the next big winter storm.

Regarding monitoring, I already use PVO plus I have Home Assistant running in a docker image on one of my servers just for its energy dashboard. 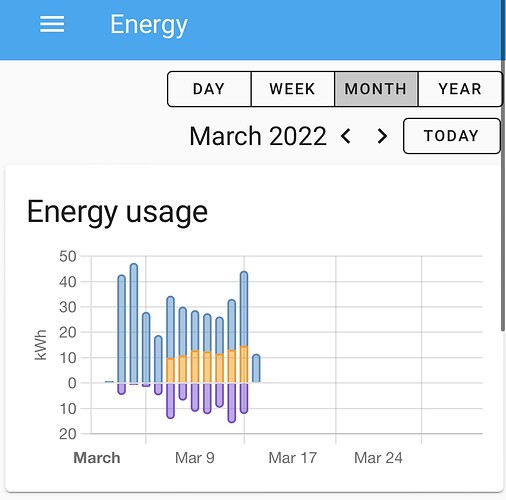 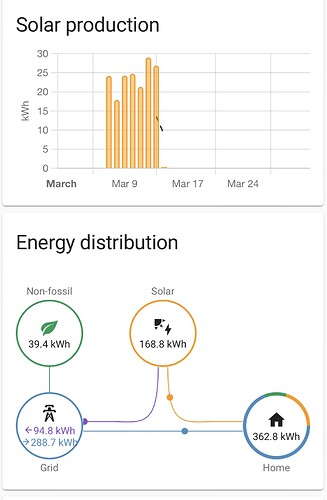 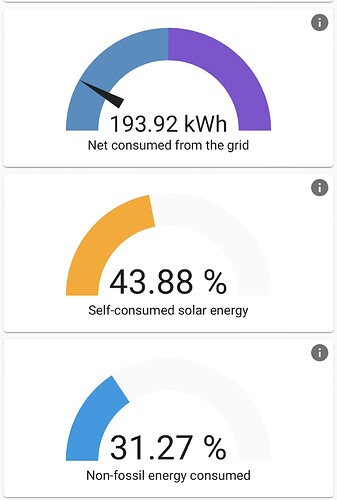 Perfect, I use the HA integration as well. So yours will essentially be the same but with an additional node being the battery.

You might be right about the 4 circuits then, perhaps my house only has 4 circuits.. I haven't actually looked at the meter. I've never had anything turn off during an outage which includes the clock on my oven so I'm not sure.

Here's an image of a daily dashboard with the battery, but you can modify the view of course.

Edit: I’ve got 5 circuits that I’d like to have running during an outage so fingers crossed. 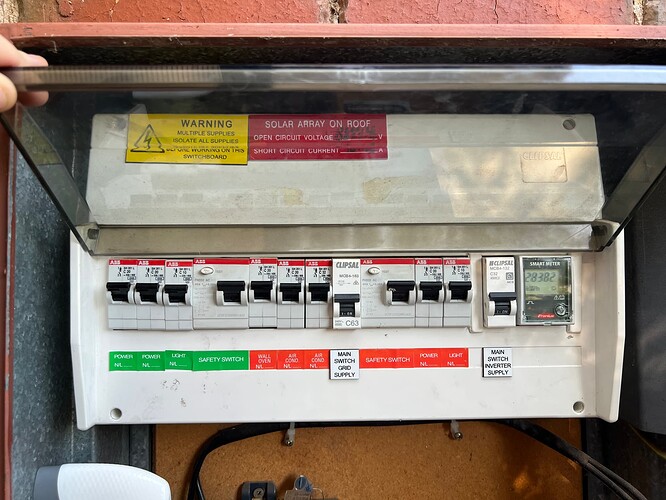 FWIW - Multiple circuits being backed up 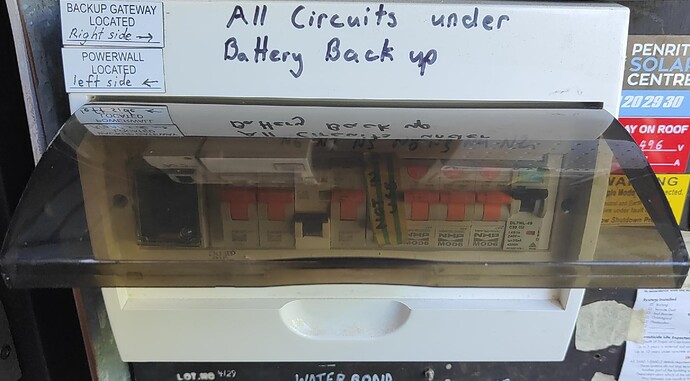 Nice, I see we have the same Fronius smart meter.