Again, new user, just providing my feedback when trying to figure things out for the first time.

image866×126 7.82 KB
The "Firmware Update" button should be labeled better.
Is it HUB Firmware? Device Firmware?
I get that we're in the Z-wave menu, but all the other buttons say "Z-Wave Exclude" and not just "Exclude".

I would suggest something like "Hub Z-Wave Radio Firmware Update"

Same with the UI that appears when choosing "Firmware Update"

I know that its the radio update and why I'd want/need to update it after checking the forums and support. But if it was less vague, that would help.

I think they should remove the button altogether.

I think they should remove hide the button altogether unless there really is an update.

Why? If there is an update, it is should just install it on the next reboot.

Core firmware isn't the same as the optional platform updates to me.

Except when moving forward would prevent rolling backwards in the event if a backup restore, radio firmware updates should just happen.

Or at minimum be tied to the platform update they are released with. Install 2.2.10? Then you get the firmware update. (Which I guess is kind of the same thing as above)

No need for a button.

I expect I'll be in a minority in this opinion though.

No need for a button.

Just for the control freak in me I guess. I like to do things like this myself, on my own terms. Same reason I am a terrible passenger in a car.

Not to stress you out, but they already don't list what files are changing, or even every change, in the platform updates.

but they already don't list what files are changing

I agree though, that for most users the invisible and automatic update probably is best.

I think the UI should explain what it is. You can't give too much information for something like this.
As it exists, it looks like a programmer added it last minute as a utility that only they understood what it does and when to use it. How would this pass user acceptance testing?

Why not make some simple changes:

Or.... Remove the button, automatically update firmware (which I actually think it does already on today's firmware version - might not in the future though?), and avoid all that work completely.

If I remember right the firmware updates used to always be manual (I think there has only been 1). But then some people's radio would get busy and not perform the manual firmware update, so they added a check at boot that upgrades it automatically during boot, thus making the button useless (today).

But yes, if they keep the button it may be good to add more description to it's function.

Either way it is @bcopeland fault.

Or.... Remove the button, automatically update firmware (which I actually think it does already on today's firmware version - might not in the future though?), and avoid all that work completely.

At the least, show the Zwave radio firmware version on the zwave information page in Settings. I dunno how you see it otherwise.

There is (or was at least, haven't checked in 6+ months) a hidden url to see the firmware version. It is hidden because this is a consumer hub, and they aren't supposed to worry about junk like that (I assume).

SmartThings is more "consumer" than Hubitat, and it has lots of details viewable, although it is on the IDE which only power users would generally use. Still, having more information (and not on super secret pages) usually helps, not hurts customers. 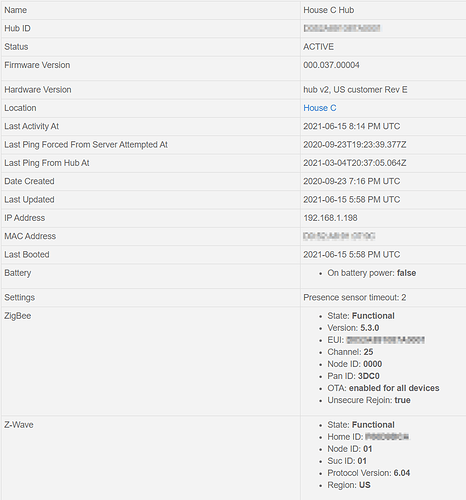 For what it's worth it is: /hub/zwaveVersion

Still, having more information (and not on super secret pages) usually helps, not hurts customers.

Sometimes. But other times it just adds to unnecessary and pointless support emails and questions that take time away from development.

But whatever, tis what it tis. Not my call in any case, so my opinion is moot.

No idea if that url is supported or will work in the future, but it works right now.

Sometimes. But other times it just adds to unnecessary and pointless support emails and questions that take time away from development.

Here's my argument. I would put the firmware version as a viewable detail before I would put a button that is confusing. The support emails have gotta be 3x as likely for the button. "What does this do?" "Why do I need to press it?" "When I press it it says there is nothing that needs updated but I want to update the firmware on my Inovelli Dimmer!" etc.

Probably. As the button has been there since August, though, it must not have been too annoying for them.

But we are in violent agreement.

If it stays, I think it could use some description/text. If it goes, well then there is no problem to solve.