I started the move to HE because of what is happening to Smartthings. I took off from work, and for three days, I’ve been moving devices, pistons etc. to HE. I had about 220 actual and virtual devices to move, of which approximately 50 were Z-wave devices. So far, I’ve also about 30 of 60 pistons.

All went fairly well until, all of a sudden, I started getting issues with Z-wave devices on Saturday evening. It happened about 6 hours after I included the last Z-wave device. I’ve done a few hours’ reading about Z-wave issues and have tried things like Z-wave repair and let it settle for a few hours; turned the hub off for 30 minutes etc. Matters gradually got worse as more Z-wave devices stopped responding. The last time I rebooted the hub last night (that was about 7 hours ago), it took at least 30 minutes for the first Z-wave device to show data movement/being alive. It is as if they are not there (although they show in the Z-wave list). After leaving the hub alone for about hours overnight, I tried turning on a few things closest to the hub which had been included first. The first device I tried turned on immediately. The second one took two or three seconds longer. The third one did not respond, and when I tried to turn off the first two, nothing happened. Now I’m back to no Z-wave devices responding.

Some more info which may help diagnose the problem:

It's as if the hub takes less and less time to stop controlling Z-wave devices between the time the first device is turned on after a reboot until devices stop responding.

Devices within a few meters (3 to 6 m) from the hub show some of the slowest connection speeds.

Many devices have joined with S0 security, which according to the forum, is bad. I don’t think there is any way to include them with no security.

The physical location of devices did not move. (I took the hub to the devices for the inclusion process.) Afterwards, the HE hub is located at the same spot as where the ST hub is. The Z-wave devices were working fine with the ST hub. Strangely enough, the devices furthest from the hub, which were sometimes slow to respond with ST, were initially working very well with the HE hub.

Non-z-wave devices and pistons seem to run fine. However, when the Z-wave devices started acting up, I tried to make a webCore backup of the pistons, which failed. After making numerous attempts, I decided that one of the pistons must have an issue which caused the backup to fail. I opened all 27 pistons I had moved across and re-saved them, but that did not help. The backup still fails at piston 20 of 27. Backing the pistons up individually works. I doubt that this could cause the Z-wave issues, though.

The Z-wave log currently shows messages between the hub and a few devices, but they don’t respond.

Could it be that I have a bad Z-wave radio?

I purchased two HE hubs and was going to install the second one at my holiday home in two weeks. Fortunately, I added a cloud backup of the first hub a few hours before the problems started. I wondered if I should try restoring the cloud backup to the other hub. My understanding is that that is supposed to be a painless exercise. Would I be able to wipe that hub for installation at my other home should the issue appear on that hub as well?

Any help would be much appreciated.

Could you post screenshots of the z-wave page instead of the table? My first assumptions are that either you have a ghost device or one (or more) of the S0 devices are wrecking havoc on your mesh.

The only options for getting some S0 devices to pair without security is the use a USB stick as a secondary controller. That, essentially, allows you to pair the device as S0 to the stick which will pass it as no auth to the hub (for a long technical reason that I, honestly, don't fully understand).

Thanks for assisting. I trust this is what you're looking for? 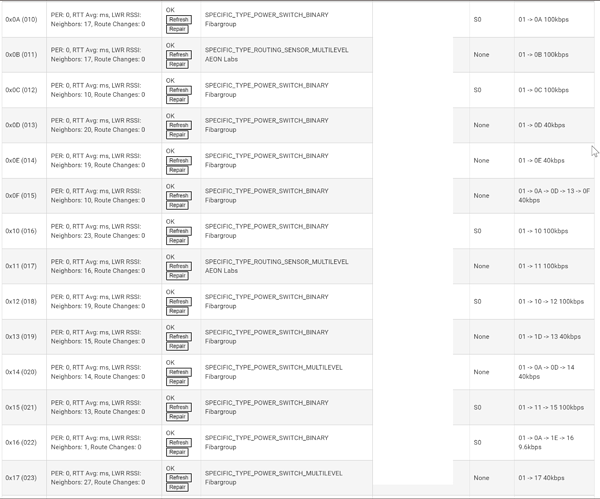 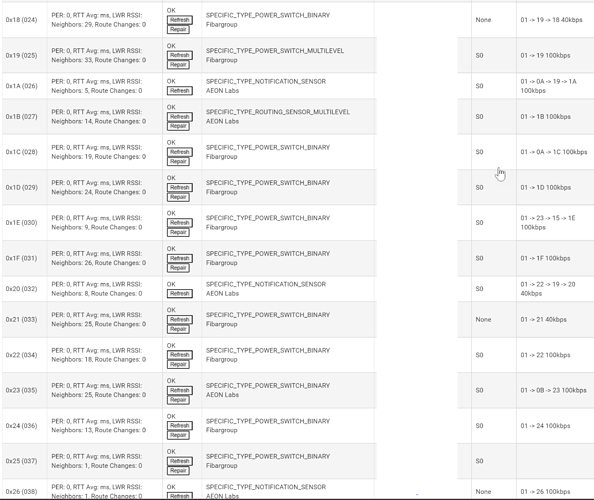 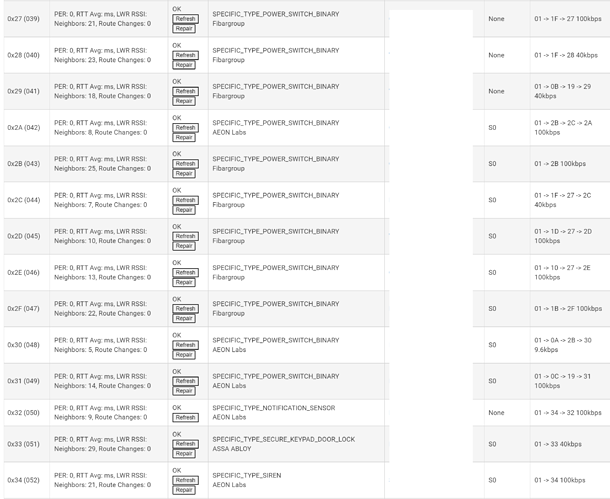 The last device without any Route info worried me, so I tried to remove it after a further reboot and before trying to switch any Z-wave device. (All webCore pistons paused.) The device is about 10 meters from the Hub. Two attempts to remove the device from the hub were unsuccessful, with no indication in the Z-wave log of my attempt to remove it:

Another interesting thing I noted is that I only see entries in the log from a few devices. Nothing from any of the other devices.

Many devices have joined with S0 security, which according to the forum, is bad. I don’t think there is any way to include them with no security.

Yes, too many S0 devices can bring down your mesh, especially with zooz products. You can include these devices without s0 using a z-wave stick paired as a secondary controller.

In general it sounds like your mesh is being overwhelmed. Pair everything you can without security (except for locks and garage door stuff)

Pair everything you can with security

I believe you meant to say......"Pair everything you can without security....."

One thing at a time.

I have an Aeon Minimote, but the comments on the forum seem to be that it can't be used - at least not to include a device. I ordered an Aeon USB stick this morning.
Took another day of work and I've been fighting this all day. What also may be an issue, is that the Fibaro drivers seem to have "Enable Debug Logging" and/or "Enable description Text logging" on by default. Turning these off (which took forever, because the hub is waiting for the Z-wave network most of the time) seems to have made a big difference.
I made screenshots of the settings of all devices in the Smartthings app before I excluded they were removed. I checked the screenshots and these settings were off while the devices were linked to the Smartthings hub.

Aeon Minimote, but the comments on the forum seem to be that it can't be used

Fibaro drivers seem to have "Enable Debug Logging" and/or "Enable description Text logging" on by default.

Most (all?) drivers have logging turned on for 30 minutes after installation.

You can use the built-in Preferences Manager app to change this or other settings all at one time.

Most (all?) drivers have logging turned on for 30 minutes after installation.

You can use the built-in Preferences Manager app to change this or other settings all at one time.

I wish I had known this. Would have saved me at least an hour today. (I went through all devices and their children one by one to turn this off.

How would doing this influence devices connected to a repeater device if the repeater is joined without S0? E.g.. I have a Yale Z-wave lock that routes via a repeater relay switch to the hub. Would the lock (which can only be joined with S0 security) still be able to use the relay as a repeater to reach the hub, if the relay is joined with security "None"?

Yes. Repeaters are agnostic and simply pass what's put through them encrypted or not. In general regardless of the level of encryption (s2 for instance) it is recommended not to use except for locks and garage door stuff due to general overhead on the mesh. I mean let's face it, if someone is close enough to sniff your network they are close enough to see what light you just turned on through the window. S0 though is incredibly chatty and should be avoided when possible. In the case of your lock though I would leave it and eliminate it on everything else. Zooz 4-in-1's are notorius for killing meshes with just 2 with s0 enabled. The fact that you have so much going on tells me you're mesh is likely being flooded. Turn it off and I bet it will be a happy mesh

Thank you, that makes sense. No, I missed that posting. Looking at it now, thank you.