Hi all
Ok had my Hubitat now for a week & have had issues trying to talk to some wifi devices I have but nothing that can’t be replaced by Zigbee ones.
I am a complete novice & this is my first post so go easy on me but this is my question.
My home has a completely wired house alarm that has 8 PIR sensors connected to it. I would like to use these sensors to talk to my hub without having to replace them.
Are there Zigbee devices out there that could be installed within the PIR housing and wired in line with the current wiring system? After all the space inside of the sensors is huge.
Removing these wired sensors is not an option and the wired system will not be replaced by a wire free one in the future.
It just seems ludicrous to me to start adding further motion sensors around my home to feed the inner geek in me when I already have sensors in the ideal positions doing a great job.
What would also be good if they all could have lux states, humidity & temp sensors as well but that is probably going too far? For me having a smart home needs to be neat and discreet and not flashy and clunky. Having seen some of peoples set up on line I am surprised they are still in relationships.
Thanks in advance
The Noobie

Have you reviewed the Konnected app?

Konnected's integration is not (yet) built-in to Hubitat Elevation, so you will need to manually load Konnected apps and drivers into your Hubitat hub. Konnected requires two Hubitat apps: the Konnected (Connect) or Konnected...

Welcome to the community. There are a couple of ways to let your alarm system sensors talk to Hubitat. Search the community posts for:

I use the 1st 2 and they work great. I started w/ Konnected but it doesn't play nice with my Zone 1 of my Vista alarm panel.

I use Konnected with my wired windows and doors. Works great. Good support too.they

Thanks for the reply's . I have looked at the above solutions and ruled them out.
The more I think about it the more certain a gadget installed inside the each pir is the way for me to go. Just need to find said gadget.

not to beat a dead horse, and I did read your reply an hour ago... but I wanted to add my vote for konnected.

it does exactly what you want, utterly inexpensive, and I use this extensively in my own setup. I use honeywell 12v standard PIR sensors and have found the performance to far, far (FAR!) exceed the performance of my old samsung zibee PIRs.

Would you mind posting why it was ruled out? just for my own idle curiosity. Thanks, and welcome to the forum. 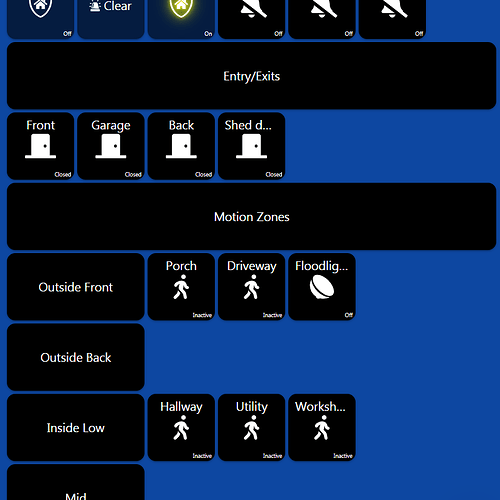 It does look a really good system & what I can see would do mostly what I wanted. The the fact that its wifi was the main reason followed by actually having to make modifications to the main alarm box. It would still not provide me with any extra temp/flux ability. Although it would be easy enough to drop in a stand alone sensor if I wished but a compromise. I am still looking for the something that that ticks all the boxes, controlling an alarm system remotely is not the top of my list. I have been looking into one of these devices www.easygates.co.uk/product/fibaro-universal-binary-sensor-z-wave its near to what I am after but not perfect and perhaps a little difficult to communicate with HE. Thanks for the welcomes everyone

First, I have not used Envisalink with Hubitat, but did use it as a stand-alone iOS app and with another automation hub, the ISY-994. Personally, I found that Envisalink itself had delays of several seconds before it reported a change in sensor status, making it unusable for my purposes (primarily to turn on a light when a door opened or PIR sensed motion). YMMV, of course, and others may have had better luck. It did work fine for remotely enabling/disabling the alarm itself.

You note that you are rather new to this, so I respectfully introduce a concept I've found helpful after many years of doing this. Feel free to ignore it as you wish, of course, but it has proven useful to me. Here goes:

I am an advocate of NOT monkeying around with the critical functions of a building's alarm system, as I classify security differently than the convenience of home automation. To me, there is an order that basically goes 1) Fire, gas, CO detection, 2) Intrusion protection (burglar alarm), 3) Protection from damage (leak sensors, temp sensors), 4) "Infrastructure" automation (HVAC), 5) "Convenience" automation (turn on light when door opens). If a "hack" I wish to try for a lower level (say, level 5) could compromise a function at a higher level (say, level 2), I don't do it. So, in your example, your physical change to the PIRs MIGHT disable your PIRs for their alarm function, so that, to me, would be a problem. On the other hand, if you could wire something in in parallel that wouldn't prevent the PIR from carrying out its role in the alarm system, then perhaps that could be acceptable (we can't really know the specifics for your situation).

All that said, I wonder if perhaps a simple contact closure (say, z-wave or zigbee) could be wired into a PIR circuit such that it would report activity to the HE device while maintaining its key role as part of the alarm system? I have never tried this and cannot recommend or endorse it, but it just came to mind as a thought to explore as I read your thread here. Others here can better comment.

Good luck, and I hope you enjoy HA as much as I have, over the years.

Thanks Madcodger, you have hit the nail on the head & perhaps I haven't explained myself that well.
You are right, and as I am new to this I am going to be asking lots of questions on my journey and maybe don't have the vocabulary for the things I would like to do but I will draw on other users experience's as well.
A simple contact closure sounds good and is perhaps what I have been looking for all this time. Now to google contact closures.

Thanks for the reply. Avoiding WiFi makes sense if that's your issue.

I guess this comes down to expense.

WiFi konnected/nodemcu boards are cheap as chips and don't need to alter the alarm system at all. Simply use a single board as a 'contact closing' device, reporting back to hubitat.

One board can be used to operate as 7 (I think), different dry contact sensors.

An alternative would possibly be to look into using an ardinuno of some description and go the wired ethernet route. This was actually my initial plan before I'd tried the WiFi chips and was blown away by them, I originally wanted to avoid WiFi.

If cost is no issue, then there are multiple zigbee devices which include dry contact sensors. So they could be used instead, in the same way, but avoiding WiFi, and paying a lot more, but not affecting the operation of the alarm.

There are quite a few options to do what you like. I'd certainly like to have replaced my WiFi system of konnected boards with something less reliant on a decent WiFi signal, but luckily my home doesn't have a problem due to the placement and quality of my router.

So my main factor was cost, to be honest. And it's difficult to justify spending more than about £2.50 per board, as I have done.

Waitching this thread with interest =)

My hard wired intruder alarm system allows me to link outputs that follow the state of the zone (input), these outputs give a voltage out so I had to fit a relay board to give me dry contact switching. From there i wired these onto the digital inputs of an Ethernet enabled Arduino Mega2560, and using the awesome Hubduino by Ogiewon this allowed me to interface my intruder alarm onto my HE seemlessly.
My alarm system also manages my smoke detection system which I could also integrate as a simple contact onto HE, allowing me to run rules when certain conditions are met.
For the temperature and humidy, these were seperate sensors I installed but I was able to do this using spare cores in the alarm cable, plus they were small enough so I could place these at the rear of my motion sensors.
The Arduino and Hubduino together also allowed me to add many many other devices such as water leak sensors, voltage sensors, luminance sensors and switches all on one very cost effective device!

Everything I done had zero impact on the way the alarm system operated and it still remains an entity on its own.

Ring has a bridge that allows you to connect 8 wired sensors, and send the status over z-wave. Only works in the US.

I have actually been looking for something similar. I like the functionality of konnected. But also dislikes the wifi part.

Have been thinking about creating a shield with hubduino which would allow to use a connection over ethernet w5100 , and would also allow to connect a lot more sensors on each bord. I have almost 60 hardwired zones on my alarm system, so konnected would be pretty expensive.

Just a little progress update although not huge.
I purchased a Fibaro smart implant on the proviso if it didn't do what I wanted I would always find a job for it elsewhere.

So I pulled open one of my easier to work on PIR's and found the following terminals,
Terminals: -, +, NC, C, SP, T, T, SP
all had wires connected apart from the two sp ones.

This gave me a voltage reading for two conditions. Unfortunately these are off & when fully detected.
The problem is that to activate, the sensor needs to fully trip before giving the voltage. This is too slow as the person would have crossed a room before this would trigger. Ideally I need it to trigger as soon as the sensor detects motion.
I haven't used any of the outputs on the device yet as the wiring diagram on the manual doesn't seem to relate to this situation so if anyone is an alarm specialist I would be grateful for their advice.

These are power ( - + ) then NC normally closed / C common, SP would suggest spare terminals (these are usually put there for end of line resistors if being used), then T and T are tamper.

I'm not sure how the fibaro is wired, but if it needs to see a voltage positive or negative on the IN1 input to trigger it then you would wire an input voltage (+ or -) into the C then from the NC to the input to the fibaro. in a normal state It would see a permanent voltage to IN1 because its wired normally closed and then when the PIR detects movement the NC will go open circuit, thus triggering it.