Why so little love for Hubitat?

I see this kind of graphic so often. No mention of Hubitat. What gives? 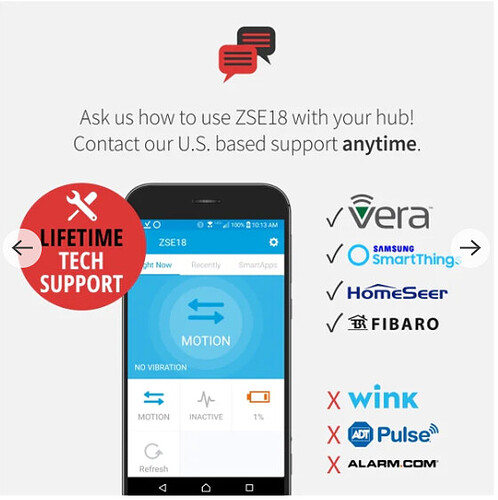 That might be an older graphic.. thesmartesthouse.com lists hubitat.. and my understanding is Zooz is TSH's "inhouse" product. 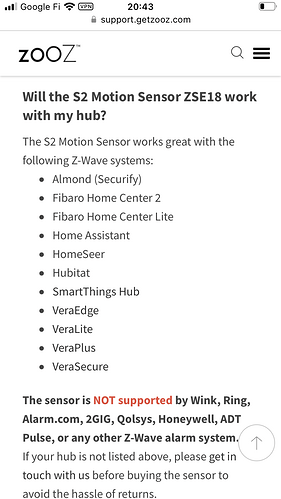 Heck. They didn’t even mention the z-box

Are you from the future?

Yeah, with that screenshot of (what looks like an old version of) the SmartThings app, I'd agree.

Looks like the sensor was certified in mid-2018, only shortly after the public release of Hubitat and possibly before many people knew about it.

You may be thinking of the ZSE40, aka the 4-in-1, which has three generations, the newest of which is 700-series. The second (and possibly first--anyone still have one?) generation of these can definitely be problematic on a C-7.

I have two of the 500 series on my C7, never had a issue with either (other than the magnet mount pulling the battery loose). Now zen25 double plugs I've had nothing but trouble with those.

Now zen25 double plugs I've had nothing but trouble with those.

Yeah, I know. I still have a few but they aren't in my mesh. Every few months if I see some new information about making them work better I include one to see if it helps. So far it hadn't. Usually within a couple hours my mesh will begin to slow noticeably and I remove it. I saw some new things recently I've been meaning to try. Maybe this weekend. I wish I could get them nailed down because I really liked them . They were perfect for some of my wife's christmas decorations.

What about turning off power reporting alltogether?

Thats what I need to try,
Last time I tried it wasn't an option. All I could do then was set it to update every 24 hours.

I have two zen25s on the shelf. I always had power reporting turned off as much as possible and the parameter 18 flipped to whatever the zen25 thread suggested. One zen25 was for our bedside tables so used daily. I didn't think i was having an issue with them but after months i was experiencing a slowdown on my zwave. Bobby diagnosed and suggested removing them and it cleared my issues. I am not sniffing packets like @jtmpush18 so i had zero indication from the HE level that they were an issue. I planned to post them to sell but it's low on the list.

BUT i read a post by Bruce where he listed some improvements for devices on the next release and the zen25 are listed. Will need to wait and see the full release notes when it gets out of beta.

I never had any problem with it on a C4, C7 is a different story. I also don't use power reporting, but in the past turning power reporting off was not an option, only reducing the frequency, and even then it still spammed the network. Usually within hours of including one it would bring my mesh to its knees. Take it out of the mesh, and things recovered within a couple hours.
I never understood why disabling power reporting wasnt an option to begin with.