What is the best way to get a older hub

Just wondering what if anyone has any suggestions on a way to get a older version of the hub. I am just hoping to save a few bucks and repurpose a piece of kit that may not be in use by someone. Is there anything on here for this purpose, or any suggestions of reputable place to get it. I was just thinking after recent events with Lan based stuff causing some odd behaviors on my C7 it would be nice to move it off from the main hub that does all the regular HA protocols.

Or is this just a bad idea as the other hub may be on borrowed time.

older version of the hub

There’s very little difference between the C5 and C7. Other than the outstanding upgrade in the zwave radio.

Considering I want it strictly for lan/cloud stuff I think any of them will do. Unless there is a big difference in CPU i think even the C3 would be fine. Ofcourse i wouldn't turn down a C5 though.

Unless there is a big difference in CPU i think even the C3 would be fine.

If you truly want to do LAN only, I can part with my C4 but without the zwave/zigbee stick. Make me an offer.

I have a C7 which is working great. One thing i notices recently is how hard lan based devices are hitting the hub. So i was thiking of pulling all those off to a secondary one. My thought on that specifically is that the more compute processes of the lan/cloud based stuff may slightly benefit from the 64 bit JVM. Could be completely off on that though

The C5 would probably be the best option. The more research i am doing i am a little worried about the longevity of the C4 with some of the high temps folks have reported. And at this point anything i would get would have been in service for a while with those temps. I may need to think about this a bit longer.

Well I have obtained a C4. It is up and running and the results of what I was trying to do are kind of interesting. Below is a screen shot of hub performance stats. 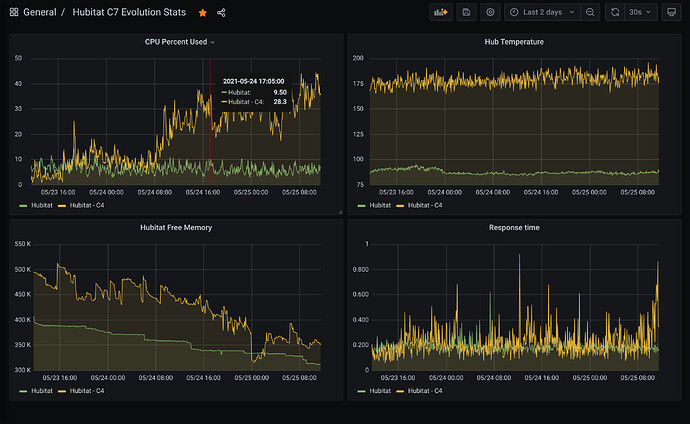 What is interesting is the way the CPU increased fairly rapidly after adding Lan based devices. At this point the only activities running on this hub are below

I also have Hub Mesh enabled to push device status's for certain zwave devices from the C-7 to the C-4 needed for some of the automations using those devices.

This is actually better then what I had initially deployed as my first attempt at this integration actually brought the C-4 to it's knees. I think i tried to include all my devices going both ways between the hubs with hub mesh and was a bit more agressive using the ping driver pools

My point here though is that this really highlights the power of the C-7 and probably the C-5. In those graphs above my C7 still has everything configured including what the C-4 is doing and really isn't breaking much of a sweet. Now if i push the polling faster on the devices i am sure the C-7 will show impact, but as of now it isn't flinching much at the same load.

I know a previous poster made a comment about the 64bit JVM being a performance hit, and i don't think it should be this pronounced. I almost wonder if there is a issue with the Network PHY device or driver that is impacting this. Either way for me this really does put a damper of using the C4 for pretty much anything other then minimal dev work at this point. Oh Well. I think i can use the Zigbee/Zwave stick with HA if i want do dabble there

So the interesting things keep happening..

So just the other day with the hub running so hot I was considering resetting the C4 and just running it for dev work. Well i started to pull stuff off of it and put everything back on the C7 exclusively and then something i didn't expect happened. It seems something running in the background may have been keeping the hub busy. I restored a backup and now the C4 is running about as busy as the C7.

So at this point not really sure what to think about this whole thing. There isn't much doubt that the C4 was running very hot after getting everything configured but it doesn't seem to be doing that now.

Perhaps something created a race condition and it never got out of it. I am going to leave it running now for a time to see how things go. But as it stands now all of the heavy lan activities are separated from the zwave/zigbee stuff. There are a few small lan activities that are still on the C7, but they don't seem to really create much load the way they work. Those are the Goove Immersion light strip integration and the Wiz Connected bulb drivers.

Yeah I like to keep my cloud/lan stuff separated from the devices if possible too. Unfortunately my C-4 died - I have another one but don't want to worry about memory consumption or running hot etc. I do have a spare C-5 so will probably use that instead.

Not sure if you ment Temp or as in very high cpu usage. After reading back what I said i realized it could of been taking either way. Either way when i was mentioning it running hot it was in reference to how busy the cpu was. I kind of expect the cpu temp to be up there.

Ironically Memory seems to be doing better on the C4 then on my C5, but that could easily be related to reduced number of overall devices on the hub.

My C-4 always ran at a higher temp than my C-5/C-7 even though the load was quite low.. I did experience a slow decline in memory over time.

I have 2 hubs in production right now: a C-5 for Zigbee devices and a C-7 for Z-Wave. When the C-4 died I had to move my Alexa and Lutron stuff over to the C-5. It's working fine but I would still prefer to keep those separate if possible.

@mavrrick58 did you ever find an older hub?

Yes I did end up getting one. It ended up being a C4. I would urge you to try to get a c5 if possible. The C4 definitely seems to be lacking from simply a cpu/Perf perspective.