What do you all do with automation when you're on vacation?

I'm curious to hear what people do extra with their home automation when they are on an extended away period from the house vs just regular day to day away.

I think the obvious one is some kind of light scheduler to make it look like someone is home but are there any other things people do. I'm looking for insight to see if there is any point in having a vacation mode in mode manager in addition to just my regular away.

I try and keep whatever lighting automations the same as when I am home. The idea is to make it hard to tell the difference. This also means not having lights come on when we arrive but rather have exterior lights on a more scheduled regimen. For me the extra stuff is the amount of alerts goes up. Otherwise some interior lights mimic some basic behavior - bedroom lights, using randomized delays for off etc.

Once our phones have been way for 24 hours a virtual switch called On Vacation is turned on and that is used to activate vacation lighting and to turn off some outlets which would normally be on even when were only gone for work like the outlet in the shed with batteries charging often in the summer. Then the virtual switch is only turned off and the outlets turned on when one of our phones returns but not if a family members phone arrives even though their phone will disable the alarm and re-enable it when they leave.

This mimics someone going to the downstairs WC.
I have a similar rule that mimics the upstairs hall light and bathroom that goes on through the night. 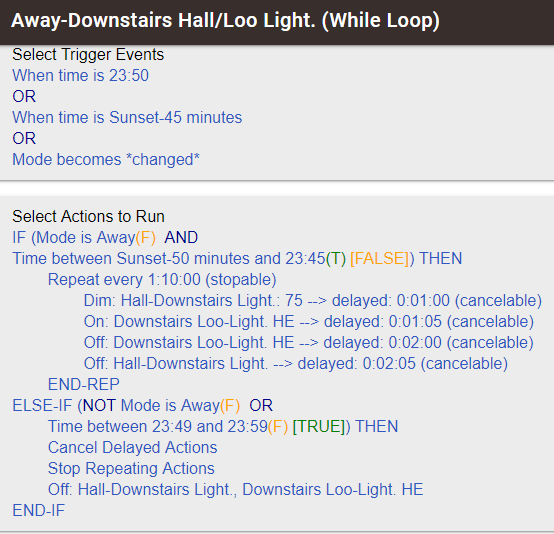 I have a vacation mode on my alarm system. When this is activated, if the thermostat is set to heat, it drops the temp in the house to 55F, or if it's set to cool, it raises it to 79F. It shuts off all lights, locks all doors, etc.

When I was on Vera, I had a plugin called Deus ex Machina, and some other one that would basically create virtual "ghosts" that would haunt your house at night until a certain time turning lights on and off at random times to make it look like people were home. I haven't seen anything like this for HE yet.

Another thing that I haven't yet done is automate TV's turning on for some period of time. If I were a burglar and saw the light from a TV in a house or the TV itself, I would probably skip that house thinking someone was home.

I don't really do anything with the sensors connected directly to the HE for vacation, other than having the HE send me temp and water alert warnings (which are on all the time, not just vacation mode). My security system has plenty of sensors on its own to alert me of an intrusion.

I believe Bptworld has created an at home simulator. Perhaps this will work similar to deus?

I'm been planning to find time to use @bptworld 's app you mention, and to figure out how to schedule Sonos music playing with it.

In the short-term I have Alexa Guard kick-in when we are in vacation mode to 'ghost' my lights.

I'm curious to hear what people do extra with their home automation when they are on an extended away period from the house vs just regular day to day away.

I put the house in effing disco mode so that neighbors can REALLY enjoy me being away.