I use mostly the Sylvania (Amazon US link below). They are Zigbee with native HE support. The provide color, color temperature, and full brightness control and (as you can see) are less than $10 per bulb.

Another nice feature, the ones I got remember the last state so that if the power cuts off you do not have to reset the color temp and level. 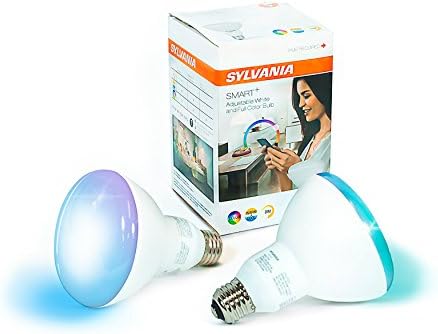 Thanks for sharing ! I tested slyvannia and did not like themat all

I have not tested them again since HE. I heard they do not repeat their signal very well

I might try again and see how it goes

Anyone try this yet ?

I don't have BR30 fixtures anymore, but when I did, I use Hue bulbs and liked them. I also have a friend who switched from Sengled BR30s (one of few I'd try directly paired to Hubitat unless you have a dedicated "bulb hub" for the repeater reasons you are apparently aware of) and is much happier with them; the Sengleds--and most Zigbee bulbs paired directly to Hubitat in my experience--sometimes didn't respond if you sent multiple commands in a row or to multiple bulbs at the same time, some of which Zigbee group messaging can help with (Hubitat can do this via Groups and Scenes if you choose the option; I'm pretty sure ST has never been able to do this on the outbound side), but performance still wasn't as good as doing it through Hue. The Hue system is rock-solid on its own, and Hubitat has a built-in Hue Bridge integration for bulbs and rooms/zones (groups) that works well to integrate them. I also wrote a custom to add a few features I found lacking in the stock integration and add support for scenes, which are generally "real" Zigbee scenes on the Hue side and much faster and more reliable to activate than Hubitat's scene emulation via Groups and Scenes (this part does not use group broadcasting or scene IDs).

The biggest downside, of course, is the price.

There are cheaper BR30 bulbs you can get that will work with Hue (Innr, though I'm not sure if they do color, is one I'm aware of), but then you lose out on access to some Hue features (default power-on state, official Siri/HomeKit integration, etc.). If you don't have a reason to prefer smart bubs, like color or CT control, you might find a smart switch/dimmer to be a better option.

If it's just one or two, I'd also consider LIFX. They're Wi-Fi, which avoids the Zigbee problem, but then...they're Wi-Fi. They aren't natively supported but work well with a community integration. They're also not much different in price from Hue, but they do have some things some people like better (e.g., higher-lumen output options).

Do not use Sage. They are zigbee but are repeaters (that cannot be disabled), and they wreak havok on the zigbee environment. Even with a dedicated hub, I know people here who gave up on them.

Thank you for the write up , I am running hybrid as in hue and zwave

I am probably going to do what you recommend, control by a switch vs getting bulbs

My kitchen will buy hue , then the basement that has around 15 BR30 just be ruled by a switch

I use Sengled BR30. They're not repeaters so they dont cause issues with my zigbee mesh. Reasonable on Amazon. I also have them functioning with Alexa through Hubutat. I dont use the colored bulb variety , just the white to light a room.

Is your HE the hub then ? That works well for you ?

Yes. I dont need to use Sengleds hub. They connect fine with Hubitat

The only issue I've noticed, if i remember correctly, is after a power failure, the Sengled bulb turns on even if it originally was off. Something some may not like. I don't know how other bulbs perform in this situation except my old Hue light bulbs performed the same way

Sengled fixed that supposed. I will test it later and confirm

Will the bulb remember the last brightness level / color temperature to which...

I'll second what @djgutheinz said since I have six in a group that have been great on HE. If I had to replace them, I would probably get the RT6 version which is what I have everywhere else in the house. The RT6 have better color and color temp than the BR30s.

Thank you for sharing !

your feedback has helped a lot !

Oooooo that's right !! Hhshaha I knew that but completely forgot because I have been doing a lot of reading on zwave recently.....lol

Thanks for the reminder

Do they repeat the zigbee network ?

Do they repeat the zigbee network ?

Yes. Sengled make BR30s that don't repeat. Safer to use with Hubitat. I like their A19s.

Is is bad to have zigbee bulbs that repeat ?

Why not just get zigbee or zwave dimmers, and use whatever bulb you like? This is what I do. I replaced almost all cans with Commercial Electric T-61 retrofits. They are not available anymore, which sucks because they are awesome. I use ecosmart br-30 or par-30 in other locations.

I also have some Cree bulbs, but they are dying.

I have 135 total light fixtures, so I have tried almost every bulb or retrofit on the market.

Longer story , if I want to make the entire house blue I want to be able to do that

I just bought some of the below switches , if i like them replacing all switches in the house with then