I was thinking of ditching alexa as voice announcements and going with something else. I don't want to buy expensive speakers as we really don't use them that much, so does anyone have some budget friendly alternatives?

Vlcthing is an option. Opens up many options.

You caught my eye "Poor man's sonos"
For smartthings, though?

Two ideas I've seen: Google Home Mini/Nest Mini with the Chromecast integration (even with the mic disabled, you can use it for TTS and not necessarily voice control). You may have seen the comments from some that the Chromecast integration slows down their hub, and some people notice issues like them not working without an initialize() (I think? or other command) if it hasn't been used in a while. The integration itself also appears to be stuck in perpetual beta.

The second idea: Sonos, but I know you said "cheap." The Ikea Symfonisk versions are only $99, which is about 1/2 to 2/3 the price of official Sonos speakers, so still kind of cheap by comparison. The native Sonos integration works well here. This is what I use, but I've also kept Alexa--with Echo Speaks, I don't have to worry about the cookie/login problem, and it doesn't mess up my Sonos groups (there's probably a way around that, but the usual trick of only using one "primary" group device in Hubitat doesn't do it for me).

Before any of these, I also used LANnouncer. Back then, I had a Fire Tablet running a Dashboard (ActionTiles at that point and briefly Hubitat Dashboard) which was always on, so having the necessary app running in the background wasn't a problem for me. That's definitely cheap. Never tried VLCthing, but that looks tempting (and probably more powerful) too!

It's been semi ported. I've used it since day one with hubitat.

I'll have to check it out

The second idea: Sonos, but I know you said "cheap." The Ikea Symfonisk versions are only $99, which is about 1/2 to 2/3 the price of official Sonos speakers, so still kind of cheap by comparison. The native Sonos integration works well here. This is what I use

I am also a fan of the Symfonisk speakers. These work great for TTS.

These work great for TTS.

I'm sure that is true.

Just want to add that I purchased these for two of my former students for Christmas. And I've listened to some of my favorite music in their homes. They are just as good as my Sonos speakers - the sound is incredible. Even with fast orchestral pieces like Flight of the Bumblebee.

Absolute steal at $99. The one's built into lamps are just a little more than that.

I’ve been using a Google Home Mini with the mic turned off, for close to 2 years now without any major issues.
I bought a mount for it that allows it to be hung off a power point plug. (had to be butchered to work with Aussie variety)
Was super easy which I also really like.

I have been looking into doing something here as well. We don't Alexa, Google or Siri in my house.. I know sonos has a cloud comonet as well...is the TTS local or done via Google or AWS?. Does it happen directly or over the hubitat cloud connection?

I am back to using simple VCs for speak and I was planning to check out the GH since I have seen mention of them having the TTS capability. But if I understand correctly this requires the chrome cast integration. Yeah, I stay away from that then.

I know sonos has a cloud comonet as well...is the TTS local or done via Google or AWS?. Does it happen directly or over the hubitat cloud connection?

Hubitat's built-in TTS support leverages Amazon's Poly Text to Speech cloud service for any 'new' TTS phrases. Once a phrase has been converted into an audio file, that file is cached on the Hubitat hub will be reused any time that phrase is requested again. This audio file is sent over the LAN to the Sonos speaker for playback.

So, there is a little Amazon Cloud involved, but that can be kept to a minimum as long as your TTS phrases don't include things that always change, like the date and time.

If you want 100% local only TTS... with the latest Hubitat firmware you can now store files on the hub. I actually store audio files (mp3) on the hub that play a little tune each time the mailbox is opened. One could easily record their own voice, store it as an mp3 file on the hub, and then have a Sonos speaker play that audio file based on whatever trigger you'd like. While not exactly 'Text to Speech', it would be 100% local with no cloud involvement.

Here is an example using the Hubitat Notifications App for my mailbox. 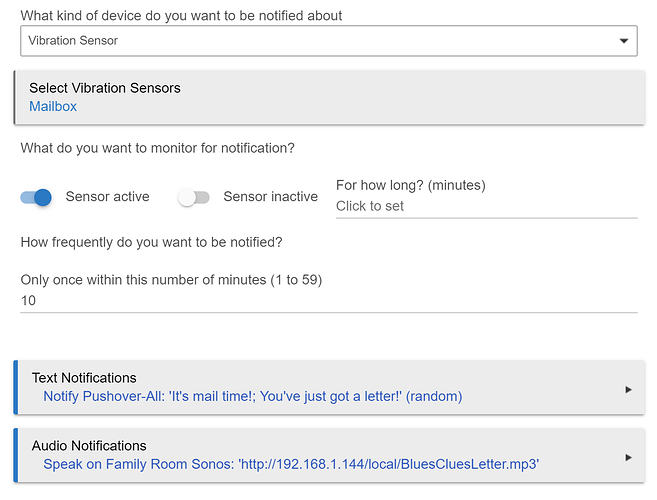 Edit: Use the Media Player Capability in order to specify a URL to be played.

Do you know if the call to AWS Polly service happens direct it is it relayed via the hubitat cloud connection?

Unfortunately, I do not know for certain. Does it matter? You may want to ask someone at Hubitat like @mike.maxwell for those details.

If you don't mind a small project you could design any system you want on pretty much any budget with these. https://wiki.seeedstudio.com/ReSpeaker_6-Mic_Circular_Array_kit_for_Raspberry_Pi/

They also have a newer version but I think it goes for about twice as much.

Do you know if the call to AWS Polly service happens direct it is it relayed via the hubitat cloud connection?

I think it is direct. My second Hubitat wasn't registered for a short while after I got it (maybe a week or two), and I'm pretty sure I used TTS (via Sonos) in the interim.

MyDrivers. Contribute to Scottma61/Hubitat development by creating an account on GitHub.

Some more research on this site:

I currently have a leak sensor setup to send a notification to my Sonos speaker. The trouble is that when doing this it clears the current playlist which I don't like. Is there a small zigbee/z-wave battery powered speaker I could use just for notications? I was hoping I could somehow use the speaker in my Nest smoke alarm but that's a dead end!

I use @djgutheinz integration for Samsung WiFi Multiroom Speakers. I've picked up the R1's for as low as $35 and they work great. Not sure if there are cloud dependencies. @djgutheinz - can you clarify?

The Samsung WiFi R1 speaker Implementation does NOT require the cloud for local operation. The integration only uses the cloud when playing the embedded music channels or playing a user-defined url (a user choice).