Using Followed by in webCoRE

When writing comparison statements, common methods when using multiple comparisons is to use and / or to join the comparisons.

Followed by is interesting because it lets you join multiple trigger events into an ordered series.

Here is an example piston that uses followed by to deduce if one is traveling up the stairs, or down the stairs.

Notice that each if statement (line 23, and line 30) has two trigger events, joined together with followed by 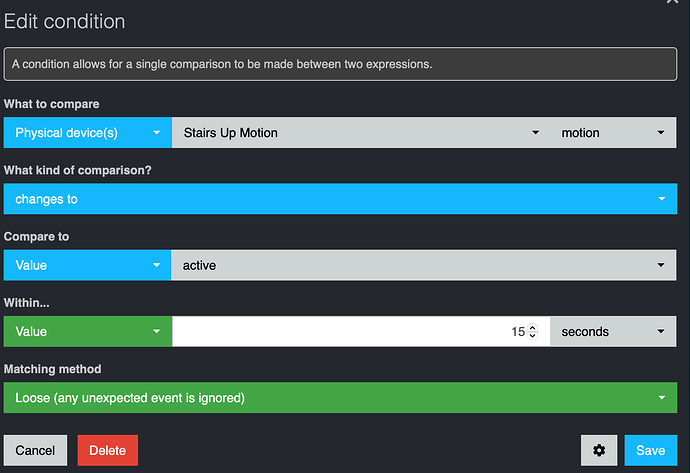 Followed by requires that all the comparisons are trigger comparisons, so that the event ordering / timing can be tracked/checked.

While this example shows two steps, there can be many steps in the followed by sequence.

If you want to use followed by, do ensure you are up to date with the latest webCoRE release on Hubitat. Earlier releases (and ST release) have some issues in proper operation.

For simple two step sequences, there are other ways to achieve similar results with a single trigger and condition comparison.

I think these tutorials are fantastic! Thank you.