I've really struggled to find a decent wall mount solution for a tablet in the UK on Amazon or elsewhere. I'm using Amazon Fire HD 10's at the moment for my SharpTools dashboards with Fully Kiosk.

I'm looking for something 100% flush - I've no issue cutting into the walls whether it be plaster or board. Anything I've found is ugly and sits proud of the wall - it needs to be flush. I did see such a device on the SharpTools forum (Show off your dashboard thread) but that was for an iPad and only available on Amazon US. I wish I could 3D print as I'd design and make my own - it'd be a very simple design, just a shallow tray the depth of the device with a plain white bezel to hide the edges of the cutout and keep it level with the wall.

Currently mine are pinned up with self adhesive velcro as shown! - as visually it's neater than anything I've found available. (shame about the cable - I did source a USB C that doubled over behind the device but it was too large to fit down the existing channel in the solid wall) 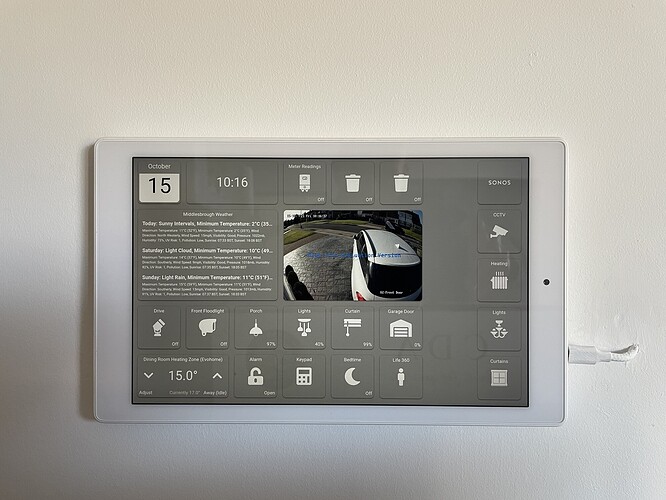 I do not have a flush mount for my HD Fire pads, but I do have flush cables that are hidden. I have purchased several mounts and cables from Amazon Fire HD 8 Tablet Wall Mount 7th & 8th Generation | Etsy. Maybe he can print what you need.

I did a recent wall mount using Vidabox. They're not flush, but IMO they look pretty good surface mounted.

There's no reason why you couldn't flush mount them though, the front clips on and off really nicely for access. 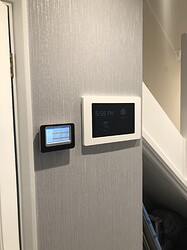 I do not have a flush mount for my HD Fire pads, but I do have flush cables that are hidden. I have purchased several mounts and cables from Amazon Fire HD 8 Tablet Wall Mount 7th & 8th Generation | Etsy. Maybe he can print what you need.

I saw one of those Makes by Mike mounts over on the SharpTools forum - one of the staff was showing off a wooden frame. It looked good.

That one is also surface mounted. He purchased the flush mount as he wanted the wood grain faceplate and that option was only available with the flush mount (in-wall). Since he already had a power box and stuff in place, he built a small wood frame and attached the flush mount to that - effectively making it an 'on-wall' mount. 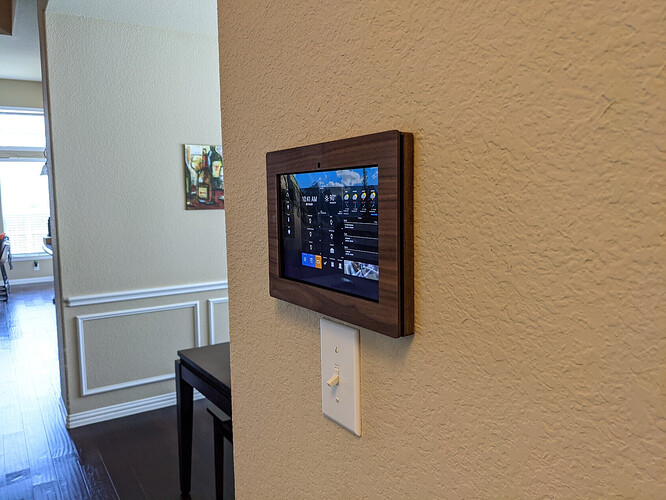 Makes by Mike is one of the only companies I know that has a flush mount available for retail. SmartHomeMount.com is also popular with the SharpTools community, but I think all of their stuff is 'on wall' mounts -- you could reach out to them and see if they offer a flush mount through their custom program.

When we were at CEDIA, there was a company called Wall Smart demoing some of their mud-in flush mounts. I think you have to go through a dealer though. 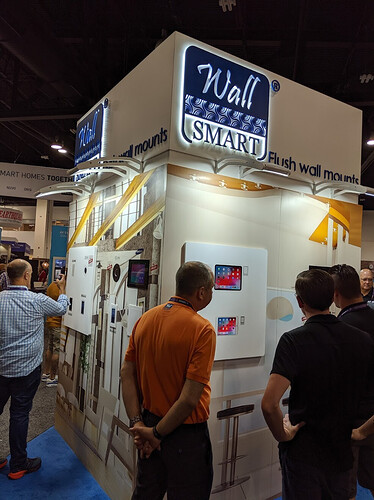 @josh - yeah that's the one. Somewhere in that same thread on your site there's a completely flush iPad mount with just a slim flat white bezel around it - it looks the business. I'll take a look at those links - thanks for that.

demoing some of their mud-in flush mounts. I think you have to go through a dealer though.

WALL-SMART WORKS ONLY B2B WITH AUTHORIZED DEALERS OR INTEGRATORS.
TO FIND A WALL-SMART DEALER IN YOUR AREA, PLEASE COMPLETE THE FOLLOWING FORM:

I don't understand why companies limit their market like this and refuse to sell retail. There are so many cool products you just can't buy, or have to buy "grey market".