I was having the same issue...

I noticed that my Chromecasts had stopped speaking. I use a Chromecast group that I named "SmartTalk" to send speech to the various Google Home mini's that I want to send audio to. I went to the Hubitat > Devices > SmartTalk page to find that the state variable uriq was massive. I simply hit refresh on the SmartTalk device and it started flushing out all of the queued up TTS that had not been spoken (it's rather annoying flushing out; perhaps there needs to be a delete queue button or somethi… 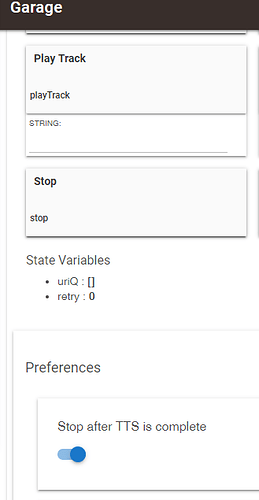 Does that stop make it go back to your previously selected playlist? That is the only reason I don't use my Sonos devices to speak from Hubitat since it leaves what it said in the playlist and I have to re-select my playlist after each use.

Do you see anything under uriQ?

If so, first thing to do is hit Initialize on your Sonos device page, this will clear up the uriQ
Then enable Stop after TTS is complete.

Thanks for the tips, When I got home form work I was told that it was working. All of my TTS rules just started working correctly after I updated to 2.1.0.120.

Thanks for the help.

@bravenel I have found that google TTS will normally speak but suddenly will not. Is it because is still in beta stage ?? are there any steps of advises to make it work most of the times such as assigning static IP to my google minis or use specific steps when doing the rules ??

I have not had an issue with it not speaking, but you can assume that it is a symptom of being in beta. Recently I setup cast-web-api. It was fairly simple, especially since I already had setup the client ID and secret from Google Assistant Relay. It is working really well and I really like that it now allows you to cast messages in the Google Assistant voice as an option.

If you're not opposed to running an extra Raspberry Pi or old laptop as a node.js server, then cast-web is a great option that takes the additional load off of your hub. If you have not setup a node.js server, this is a good reason to start. I'm not running four different instances on mine for Google Assistant Relay (super useful), Insteon-server (excellent in-wall products), Homebridge MakerAPI (working fantastic without loading down the hub), and Cast-Web-API (Native Google Assistant voices on individual devices, individual volume control, and broadcast capability too).

well, I was an Smartthings user and I had my android phone with the node js and the cast-web-api but I have to be pushing the "start" button on the node every 3 - 4 days because it will automatically stop. One of the reasons of migrating from ST to HE is that HE has the TTS built in so using again Node js would put me where I started.
Could the problem that it automatically stopped every 3-4 days be fixed if I use a raspberry instead of my android phone?
And other question is if there is a way to resume the music after there is a TTS notification because currently if I have spotify playing music after TTS it will stop and not resume the music after

I don't use either for music (other than a door chime), so I cannot comment on this. But I know there are solutions out there. Maybe someone can chime in on that. Might be better to ask that in another thread that specifically deals with that subject.

I've only just set this up, so I don't have that many days under my belt to know if that's going to be an issue. I saw no reports of it, so my guess is it is not an issue. However, if it is, then you can set it up to run persistently.

I'm not on the same page when it comes to distributing the load. I'm not surprised that asking this tiny android box to do a lot of things can be taxing at times. People often write how powerful home assistant is, but I think in some cases it's running on a full blown PC, so yeah, I'll bet it is powerful. That's not to say that HE is inadequate in anyway, but there's a limit to what a single hub can do. SmartThings gets around this by running complicated tasks on many very powerful computers. That's not what you have here, but you have privacy, speed, and processes that cannot go offline due to a cloud failure. I think it's a reasonable compromise. You can always tie together multiple Hubitat hubs to distribute the load. Many do that and are happy with the results. It's not a step backwards to SmartThings, because SmartThings cannot do what can be accomplished here. You have a lot of choices on SmartThings because of the length of time it's been around, but Hubitat is quickly surpassing them in speed, reliability and capabilities. There are already many things you just are not going to be able to accomplish on SmartThings, that HE can now do.

Webcore is really powerful and I was fully using it in ST and now that I migrated to HE I have found limitations in rule machine compared to webCoRE but I see the HE team working hard and releasing continuous updates to their system which keeps me happy. I do not want to load WC yet in HE as they said is not advisable so I am trying instead to use RM with multiple rules sometimes to achieve what I can in a single piston in WC.
Do you have a link to how to set a raspberry with the cast web api for Hubitat? (I know how to do it with ST in android but no in HE with raspberry) anyways I will need a raspberry to set a VPN conection(so I can create my rules when I am not home) so I could probably use it for both purposes

WebCoRE is running on a powerful web server, not the hub. That changed with the addition of web to the original CoRE (Communities own Rule Engine) name. So it's not a 1:1 comparison.
Don't load webCoRE on HE. RM 3.0 is powerful enough and runs locally.

To install on a Pi, start here and choose the option for installing on Linux. Raspbian is just a version of Debian linux.

that is the link as well that I used for Smartthings so just follow the same steps for HE with same code I guess?

Same instruction for the node.js server, but you have to use this fork of the code for HE. It's based on v 1.0.0, but it doesn't matter. As long as you use all the forked code, it will work on HE. You cannot use the v 1.2.1 code as it doesn't have the necessary modifications and will not create the child devices as it should.

Ok will give a try. Thanks

Hi, sorry for this question but I am a bit new on raspberry stuff, I have only worked before on ESP8266's with the "ST_anything" development from Dan. Are there different Raspberry models available out there? what exactly model should I ask for to being able to put the TTS web cast api on it ?? only a Raspberry and thats it ?

If you only want to run that, a Raspberry Pi Zero W will do fine. However a Raspberry Pi 3 will not cost that much more and will let you run a GUI much better that a Pi Zero W which is a bit under powered for that.

But if you don’t mind using SSH, then Raspberry Pi Zero W is fine.

I have plans actually to use the respberry to set a VPN to access my modem remotely and be able to create automation/rules when I am not home and as well for the web-cast-api so the raspberry PI 3B would work I guess right?

Hi. Will the web-cast-api run locally once set up in the raspberry? Or cloud based that I will need internet to get the TTS notifications

This is local if you want to use the Hubitat TTS. If you are using the Google Assistant TTS voice, then you will need internet access.

I am a bit confused. both are using the google assistant but one through Hubitat and the other is through the web-cast-api (using the raspberry) is not it ?? sorry , kind of new on this stuff..