Currently my kitchen has one set of lights controlled by 2 different light switches. I have no neutral wires and can’t use smart bulbs for this light fixture so to fix this I installed a third reality light switch over each one. The third reality app has a great feature that is able to put 2 switches together for 2-way switches so it knows when the lights are on even if sometimes a switch being up means on or off depending on which switch got flipped last.

I want to bring all the devices over to Hubitat but would I be able to have a similar automation/group as this? Any advice on how to set this up?

There are a number of ways in Hubitat and you just pick the best one for you device.

IE if the device produces button events then normally that's the fastest way. So you use button controller to say when button one is pressed turn on this light and when 2 is pressed turn it off. The light is the device controlled from the other dimmer. This way for example each switch you press up on it always turns in the light.

There is also the built in mirror app that would work. This is especially useful for dimmers

Yes this is another way especially for RGB stuff.

Perhaps I didn’t describe this right. The third reality smart switches physically use a motor to flip the switch up or down using only a single button no other buttons to press. The 2 switches I’m using control the same light therefore it is possible to turn the light off with switch #1 then go to the switch #2 and turn the same lights on while switch #1 would still be in the off position without changing positions. The thirdreality app has an automation in place for N-way switches. It can automatically track each switch together to determine if the lights are on even if one switch is in the off position and one switch is in the on position. I hope this makes sense?

Would a mirror mode still work? If I mirrored switch #1 to also push a button on switch #2 wouldn’t this then first turn the light on with switch #1 then turn off the lights again when switch #2 mirrors the toggle?

I’m curious - why do you need third reality controllers on both switches?

Would a mirror mode still work?

IF [switch on] Then
turn off
Else
turn on
end IF

however im also curious to the same question as @aaiyar

We have lots of visitors all the time so the reason I had them on both switches is to prevent my automation’s from failing if someone manually switched the second switch as then the one with the third reality switch would then be in the opposite state without knowing. I guess I could easily fix this by just covering the other switch but would be nice to be able to use both switches still without breaking any automations

Oh I think I know what you are getting at with the 2 switches. I could have 1 third reality switch then just a smart button/dimmer placed over the 2nd switch that is just a on/off and doesn’t physical switch the switch. Sorry for the confusion I didn’t think of this until reading it all again and your first suggestion didn’t click in my head. Any recommendations for smart button controls for lights? I use hue dimmers for all my hue devices but heard they can have issues when used with other devices is this true?

I use hue dimmers for all my hue devices but heard they can have issues when used with other devices is this true?

its not the dimmer its older none zigbee 3.0 products as a whole. the tend to have bad buffers and drop messages so the recommendation is to isolate theses to their own hub be that be another hubitat hub or the hue bridge. for me the later didn't work so i have another hub.

. Sorry for the confusion I didn’t think of this until reading it all again and your first suggestion didn’t click in my head

its what ever you want you can do my suggestion with buttons or another device its just a button is normally the cheaper easer option. i personally don't like "buttons" as i have a old house so they would not look right. so my 2ways are wired and trigger the same input on the device behind the switch, for me my switches look normal, but they do clever things.

I have no neutral wires

There is always a neutral someplace... if not at the switches, then it will be in the fixture box. Or, since this is a 3-way circuit, you may be able to use one of the travelers as a neutral (just be sure to mark it properly). Sometimes a little bit of creativity and flexibility goes a long way. Just don't do anything unsafe.

Also, The Zooz Zen52 is likely able to accomplish exactly what you're trying to do without needing those motorized switches. Just need to locate it someplace with a neutral wire. And there are some limits on the distance between the device and the switch(es). 2 Relays in 1 PRODUCT HIGHLIGHTS   Beta release:   you may need to update the firmware in the near future to get full functionality of your device; the device may not be fully compatible with your hub at the time of this release....

I have no neutral wires

In addition to what @dylan.c mentioned, here are few other options when the switch-box doesn't have a neutral.

(Lutron has multiple no-neutral dimmers in their Caséta range)

Make your lighting smart at the switch instead of replacing your bulbs or Fixtures with Caseta Wireless. 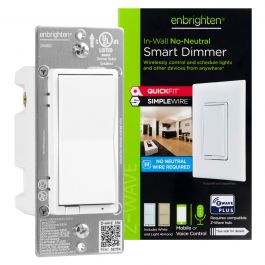 @Jake81141
I personally have used (and installed at clients) all 3 of the options that @aaiyar just mentioned.
A lot depends on what you want.