What are the S2 Authenticated devices?

They are half Ring Contact Sensors 2nd Gen (doors and windows) and half GE/Enbrighten smart in-wall switches/dimmers/fan controls. All of these devices at the time of inclusion prompt to include with S2 authenticated/unauthenticated. When I first installed these devices I took the early advice I read which was "don't touch the checkboxes in the include dialog and just hit ok".

Why did I second guess my S2 Authenticated include choices?

The Hub Watchdog app has been reporting my Z-wave mesh had a median average delay of 550ms or more. There was also regular jumps to 750-800ms and sometimes weird spikes to 8-10 seconds. I have noticed at times some noticeable delay in automations firing and controlling Z-wave in-wall light switches which I contributed to these Z-wave network delays.

What did I change?

In batches of about 6 per day I went around and excluded each of the S2 Authenticated devices and included again, this time unchecking all the dialog boxes at prompt. This transitioned devices from "S2 Authenticated" to "None". I also worked my way from the hub out into the rest of the house.

Once finished with transitioning all devices to "None" the Hub Watchdog app is now telling me my median delay is down to 380ms and very rarely I see spikes above 500ms. No more weird 8-10 second delays appearing so far, knock on wood. More importantly I can tell a noticeable difference in the responsiveness of automations controlling the Z-wave devices.

You may ask, what about that single S0 device? That is a older Z-wave only Schlage door lock that is getting replaced this month. It will join the other three Schlage door locks as S2 Access Control here soon.

Introducing 'Hub Watchdog' Simple way to monitor if your hub is slowing down or not. Features: Turns a device on/off and calculates the time it takes to happen Gives a reference to go by to see if the hub is slowing down over time Ability to notify by push, turn on a device or use Rule Machine Track data points in custom virtual device Tracks up to 40 data points (per device) with color coding Track data with graphs! View custom reports in app or add the data to Dashboard Use Examiner app to…

Glad it is going faster for you...

Of course the side effect of that is now the data is gone, no one will know if it was a hub issue or device issue, and will likely not get fixed.

Of course the side effect of that is now the data is gone, no one will know if it was a hub issue or device issue, and will likely not get fixed.

I hear you, but I was bored and wanted to see if the effort would make a improvement in my network, which it did.

Also since initially buying the HE and installing these devices I have done a lot more reading here in the Community. What I learned was S2 authenticated, while default for some devices, is really not needed and results in unneeded packets across the mesh network. The only place where authentication is really recommended is smart door locks (S2 Access Control) which I will leave in place.

It is always subjective depending on use and function. Just like passwords, accounts, locks, etc.

And "recommended" is subjective, too.

and results in unneeded packets across the mesh network

Not really / only in rare circumstances where the packet size limitation comes into play. With S2 anyway, which was the context. S0 is another story.

Regardless, interesting findings. Thanks for sharing (sincerely). Hopefully those root issues that caused your slowdowns will get ironed out (for others).

Regardless, interesting findings. Thanks for sharing.

That was the goal, simply share some data. I knew some of this would be contentious in the group, but if anything new users discover there are tools to monitor the health of your Z-wave wireless mesh network. Then choices you make can change the results.

3-week update. I have changed every device on my home Z-Wave mesh network from S2 to None. I've also removed the single S0 device by replacing it with a device that supports S2 Access Control like the other three.

The results, my mesh has been super solid, super responsive, and overall well worth the effort and changes. To that point here is a snapshot this morning of my Hub Watchdog for my Z-Wave mesh response times. Before I would get an average around 800ms and wild spikes throughout the day that could go as high as 10 seconds. All of that is gone, and it's settled down to an median of 475ms. 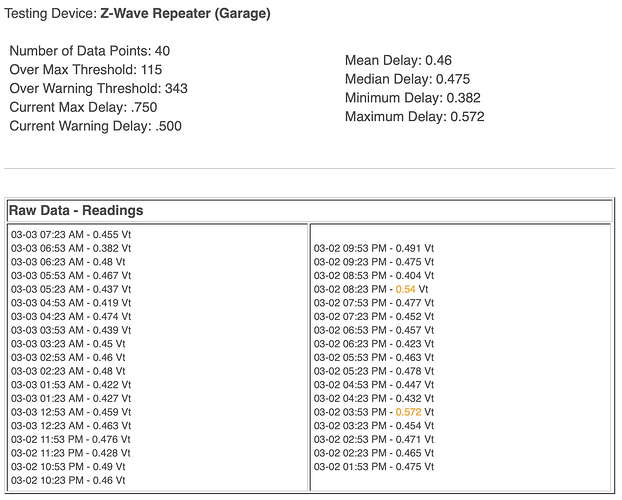 I've also started a thread for others to share their Hub Watchdog results so we can all get a sense for what is fast and what is not, where is the benchmark?

This has been one of my favorite user apps for HE to keep an eye on the health of my hub and mesh networks. As I've been making tweaks to my mesh networks (device types and placement) I watch these watchdog reports closely to get idea on impact of changes. So far I've made some big strides, from first averaging 800ms on my Z-Wave network response to now down under 500ms and no wild spikes (several seconds) throughout the day (possible overloaded mesh). I thought it would be good to crowd source…