Easiest way is to simply use my HubDuino project. The ReadMe includes step by step instructions for getting the basic system up and running. Example sketches are provided. HubDuino supports servo motors. It does not currently support stepper motors.

Announcing the release of HubDuino v1.1.4 (aka ST_Anything for former ST users) [UPDATE 1.1.4] Adds support for SHT31 Temperature and Humidity I2C Sensor [UPDATE 1.1.3] This version brings significant enhancements to the EX_Servo class to allow asynchronous and simultaneous motion by multiple servos. Also, the speed of each servo, as well as min and max endpoint angles are now user selectable. Special thanks to @VooDooFiveTwo Jeff Albers for his contributions! [UPDATE 1.1.2] I have added I…

is it possible to use somehow stepper motor?

Sure - as long as you know how to write Arduino C++ code, you could easily add that capability to my project.

What are you trying to accomplish? That might help the community provide you with better ideas for how to achieve your goals with multiple options. 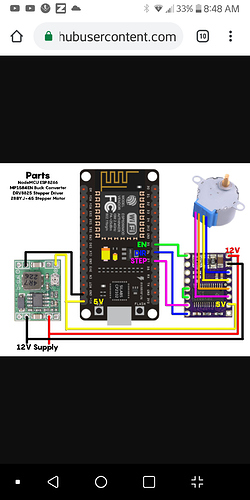 Most people are using inexpensive servo motors to automate blinds. Is there a reason a servo motor will not work?

In general, custom solutions for blinds and shades is going to require some programming experience.

ok, trying set up everything together. just created driver with child-servo.groovy and APP in Hubitat

but how to find arduino SCETCH? (for esp8266 board)

As a starting point, you can try the following sketch in my GitHub repo (along with numerous other example sketches.)

In the main HubDuino thread, you’ll find quite a bit of recent discussion regarding a lot of changes that we made to the Servo motor class. You should also read the comments at the beginning of the EX_Servo.h or .cpp files.

thank you so much

Greetings to you.
For learning purpose of ST_Anything_Servos_ESP8266WiFi, could you please advise me which servo part I can buy? Any recommendation? Thanks in advance

I used an MG995 servo but I suspect that you could use almost any digital servo with three wires where there was a positive, ground and a single digital control line,

So I am no engineering expert, but I have read that the stepper motors may be a more stable system for the blind tilt mechanisms as they do not require a constant electrical load to maintain their position. There is also more likelyhood a servo may burn out over a shorter period of time for this reason. A stepper motor with decent torque may not require constant readjustment. This becomes more important when you also want to potentially create a system to raise and lower the blinds, but also utilize solar panels for primary power as opposed to replacing a battery or having primary AC power. I have a number of small windows that are approximately 20 feet up (lighting a loft area) with no available power feeds nearby (ceiling or otherwise). That is why I am interested in the previous questions regarding a stepper motor possibility. It would also allow your HubDuino even more control over fun automation such as launching robot sharks with lasers on their heads during an HSM intrusion alert

I don't have solar power working yet, but here's my version of how to build this yourself. Might be helpful for ideas.

I have read that the stepper motors may be a more stable system for the blind tilt mechanisms as they do not require a constant electrical load to maintain their position.

I have worked with stepper motors at work for that past 31 years. They do, in fact, require a constant electrical current in order to maintain position. However, if they (or any motor, including servos) are properly geared to prevent 'backdrive', then power can be reduced/removed from them once they have reached their target position.

There is also more likelyhood a servo may burn out over a shorter period of time for this reason. A stepper motor with decent torque may not require constant readjustment.

Not sure I completely agree with this. Servo motors do have built in position feedback, which allows them to maintain a specific position. I see this as an advantage over a stepper motor. However, I will concede that the buzzing of a servo motor can be very distracting, and will lead to reduced battery life. This is why my HubDuino library's EX_Servo device allows you to remove power after the servo has achieved its target position. As long as everything is mechanically designed to prevent backdrive, the blind's tilt will not change. So, you get very accurate position control due to the built-in position feedback, and can achieve good battery life with no buzzing.

I agree completely. Trying to raise or lower blinds with a 180 degree servo motor does not make sense. A stepper motor makes much more sense in this scenario.

That is why I am interested in the previous questions regarding a stepper motor possibility. It would also allow your HubDuino even more control over fun automation such as launching robot sharks with lasers on their heads during an HSM intrusion alert

Yes, adding support for stepper motors in HubDuino would be very useful. I really do wish someone would tackle this challenge and submit a Pull Request to have stepper motor support added. But, in order for me to accept such a PR, it would need to take into account all of the issues that stepper motors bring with them. For example, with no built-in position feedback, most stepper-based motion systems require three limit switches - Home, ClockWise, and CounterClockWise. The Home limit switch allows the system to determine the position of the motion system during a power on sequence. The CW and CCW limit switches prevent over-travel, which in turn prevents mechanical damage to the overall device being manipulated. Adding these limit switches would make using a stepper very complicated for simply automating a home window-blind. Thus, this is the reason that I have not spent any effort on adding stepper functionality to HubDuino. I cannot come up with a simple design that meets the needs of users, while maintaining a safe electro-mechanical design. I do not want users angry/upset claiming "HubDuino just broke my expensive window blind!" due to the fact that a stepper inherently has no way of knowing its position. It would require a user t go through a calibration process, and hope that the user never adjusts the blinds manually during a power outage.

As @jwetzel1492 has pointed out, there are plenty of examples where folks have purpose-built automated blind controllers using stepper motors. Hopefully one of those will meet your requirements and can be integrated with Hubitat.

I will also admit that I have zero personal motivation for automating window blinds or shades. Every window in my house has interior wood plantation shutters installed. These were here when we bought the house, and would be very difficult to automate. Thus, I have chosen to focus my energy elsewhere.

@ogiewon's point about limit switches for a stepper motor is a good one. I was fortunate in that I discovered that the torque necessary to break my blinds was far greater than my stepper was capable of putting out. If it hits the mechanical limit, it makes some noise as the stepper tries to go past and gives up, but nothing breaks.

So what I did in my driver is:

So I ended up not having to add limit switches.

(However, YMMV as far as the "it doesn't break my expensive blinds" thing goes.)

Followup: I did some stress testing on my blinds today. While the stepper isn't powerful enough to hurt the blinds, if you push the mechanical limits hard enough, it is absolutely possible to strip out the internal gears of the stepper. Fortunately, they are cheap and easy to replace.

Thanks for the great input! That is helpful in trying to figure out what to do and make sense of the debate around which route to go. Yes I have rooms with plantation shutters I have no intention of removing or automating either! Some things are just better left the old-fashioned way. I have a number of loft windows that are unreachable and 17 feet off the floor though, so those are my primary targets for blinds and remote control.