Is there any plan to improve the UI on the Hubitat app so it's easier to control devices through it? Dashboards on phones are painful to use. I understand not wanting to put admin functions in the app (although I don't agree with it) but I would think the app should be able to be used as a proper controller also and the current UI makes that non ideal.

Right now, we use HubConnect to connect all our devices to SmartThings because of the better UI but would love to be able to retire SmartThings almost completely.

so it's easier to control devices through it?

I'm not sure on your use case but for me I can turn devices on and off, change modes, use virtual devices to do things.
I'm not sure what else I would want t do.

Me either. I control everything I need to through dashboards. There are many things outside of my HE that I would like to add to dashboards, but that's a different issue altogether from control of HE devices.

Maybe the op can be more specific on what they can't do, that they want to be able to?

Probably best to setup alternate dashboards for your phone that fit your phone size. That's what most of us do. My dashboard is 4 columns by 8 rows, and that's with a samsung note 10.

Thanks guys. I did setup a phone dashboard to fit my phone size. It's more I don't feel the dashboard UI carries well to phones. It's things like being able to switch over to landscape mode and have the UI properly adjust, being able to properly fit tiles based off different phone sizes and pixels. As an example of the latter, my wife and my phone have different resolutions so we can't easily share the same dashboard. It'd look weird on one of our phones. Most Smartphone apps would adjust properly based on the resolution. Also, being able to easily adjust the tiles and add devices. It's a real pain to edit the dashboard on a phone now. The "Add a Tile" screen doesn't play nicely with phones. Then tiles go on top of each other which is a mess. Most phone apps and users don't expect that.

Also, I'd add that I do think some management should be able to be carried out on a phone. There's no reason simple rules/apps shouldn't be able to be added on the phone. Right now, I have to go to the web browser shortcut on my phone to add rules and it's not a great phone UI either.

I suggest that you look closely at the dashboard in sharptools.

My wife and I have different phone screen sizes. I set my mobile dashboards up as two column wide and then scroll down. I left the column width blank in the dashboard options menu with causes the columns to autofit to the device screen.

To set the columns to outfit: Go to the gear icon on the dashboard, select "Options", Clear out the number in " Column Width (blank for auto fit)"

Is there any plan to improve the UI on the Hubitat app so it's easier to control devices through it? Dashboards on phones are painful to use.

I agree, at least to an extent. Another problem is that, despite having plenty of RAM on my phone, running Android 10, the HE app will only stay alive in the background for a short time, which means that even though I have a shorcut on my phone's main home screen, it has to restart almost every time I invoke it.

My work-around was to navigate to my default HE dashboard in the Chrome browser and save a link to that page on my phone's home page. Chrome stays alive in the background longer, so most times when I invoke the HE UI from that shortcut, the dashboard appears instantly. My main problem, however, is that I have a relatively large number of room groups, with associated tiles on the dashboard, as well as a few virtual devices to force the running of particular rules. I want the whole thing on one screen, which makes the tiles on the small side. I can read the text and see the icons easily, but it's difficult for me to tap the top of the icon to turn a group, say, on or off without messing with the brightness slider, and as I use the "bulb" template, as I want the tiles to turn rooms on and off, I must go to particular devices to, say, change the color or color temperature, but if I use the "color bulb" template, I can't turn the room on or off with one click. I still prefer what I had with Wink, which was the ability to put shortcuts to tiles right on my phone's desktop via their five-tile widgets, but my work-around using a Chrome shortcut comes in a close second for me. Jeff 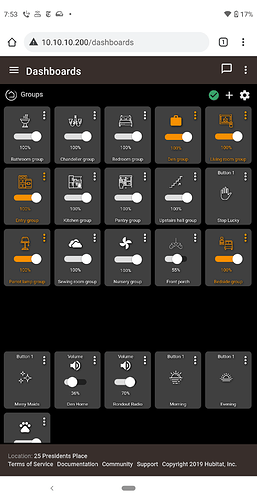 Also, I'd add that I do think some management should be able to be carried out on a phone. There's no reason simple rules/apps shouldn't be able to be added on the phone.

Another feature that'd be great to have is widgets. For frequently used devices, being able to turn on/off right from my homescreen would be great.

I mentioned this in another thread. Someone pointed out that a workaround is to use IFTTT and Tasker widgets. Not ideal, but it works.

On Android there's also an app called HTTP Request Shortcuts. Allows you to create home screen shortcuts to execute HTTP commands. I use it to toggle switches via the Maker API. The nice part is that the app supports Variables. So I have one shortcut on my home screen to toggle 10 different switches. I simply pasted in the maker API link for one of them and swapped out the device ID for a variable in the app and then defined the variable for the devices I want to control. You can even assign a label to each variable value so it actually means something to you. Very handy little app and it's 100% free.

Thanks for the suggestions! Will try out the apps although one would hope we didn't have to find other ways to make things work and the app would provide this functionality

Yeah, that would be great. And I'm sure the Hubitat team would love it too. Unfortunately, they're not Samsung. They don't have a team of 50 developers working on things. So, choices have to be made about what gets done and what doesn't. That's just the nature of the beast. Personally, I'm just grateful we have an app now!

We didn't for a LOOONNNGG time. But I get what you're saying. Hopefully one of the workarounds folks have provided can meet your needs.

ke the HE UI from that shortcut, the dashboard appears instantly. My main problem, however, is that I have a rela

Read my thread here for this via tasker. It's brilliant.

If you have Android, Tasker also supports HTTP requests. I rarely use the dashboard as I have automated most actions. Anything manual I use shortcuts on my phone or gestures on my fitness band.

Edit: Was multitasking and took half an hour to finish my post.