Is there a guide on how to install WebCore? I've read through the Using webCoRE with Hubitat and there are hints about how to do it, but not instructions.

I was hoping to somehow get more focus on porting webCoRE for Hubitat and identifying the Hubitat variants of some of the incompatible SmartThings functions in the code. So I have started this thread to serve as a single source for following purposes… Collating all the current code changes needed to get webCoRE working on Hubitat. Collating the various errors faced by users at the moment, to attract suggestions on how to fix them. `Maintaining a single Git with the latest confirmed Hubitat fix…

I think I got it figured. I'm writting step by step instructions as I go. If that's something that would be appreciated, I'll post them for others that may be hesitant to dive in.

edit: Work in progress, but posted to Using webCoRE with Hubitat.

@Roguetech Thanks for taking the effort to do this

It would be really great if you could post it in the webCoRE thread for others who are new to the platform.

Here's my plan (links are examples only).

Any rooms where I do not have, nor plan to ever have, color lighting, such as in the bathrooms, I'll use Caseta switches to control the power.

Most rooms I want color, or I'll be controlling a smart device (eg a smart fan controller).

Where that's the case, I'll put the existing regular light switches in a recessed gang box, just enough so that the toggle is just a tad short of flush with the drywall (that is, the gang box will be flush with the inside of the drywall). A normal remodeler (eg "old work") gang box won't work, since those need to clamp to the drywall. This gang box should do the trick. [I will need to remove the existing gang boxes.] Since the switch will be recessed, the wall plate cover will have to fit inside the hole, so I'll cut one down to the outer dimensions of the gang box. Against the outside drywall will be a Caseta Pico bracket. There will be an air gap between the recessed switch and this mounting bracket for the remote. Since the gang box is not directly behind the mounting bracket, it'll either screw into the trimmed-down plate cover over the light switch, or using a long screw to go through the recessed plate cover and through the hole for the light switch, into the gang box behind (holding all of them in place). (I'll probably just screw into the plate cover, since it's never easy to get an electric switch to screw in.) The outside bracket mount for the remote, I'll punch out the back, and glue little plastic cross-support with a magnet to hold the remote in place, while having a hole to get to the switches. Over that will be a regular cover, which the remote will nestle inside. The end result will be (or, at least, the end goal is) to have a remote that looks like it belongs there, which can be easily removed to allow access to a traditional ("dumb") light switch.

While I'm at it, I may go with combination switch/USB outlet and/or switch/power outlets. Where I'm recessing two (or more) gangs, I could do one of each. however, that would increase the cost significantly.

I'll be picking up one those gang boxes linked above, a generic switch, and a couple wall plate covers to test with. Hopefully, I'll have a proof-of-concept done by the end of the week. However long it takes, I'll post photos of how it goes.

I'm not sure if this will fit over the existing toggles in your design, but Lutron does make a wall plate holder for a Pico which does a good job of holding it in place in a single gang box. You should be able to find these for less at a wholesaler in a quantity pack.

It might even be worth putting a dumb shallow rocker in place of the existing toggle, just to reduce the depth since you aren't going to see them anyway. You should be able to find some in a quantity pack for less than five dollars each at your local Home Depot.

Yep. Those are great. You can put them in single, double, triple, etc, gang boxes, or even flat on the wall (screws are included for that) to make it look like a box is there, and your "switch"

is mounted in it.

3 switches over a 2 gang box. Pico on the left is secured directly to the switch plate using one of the brackets mentioned above. 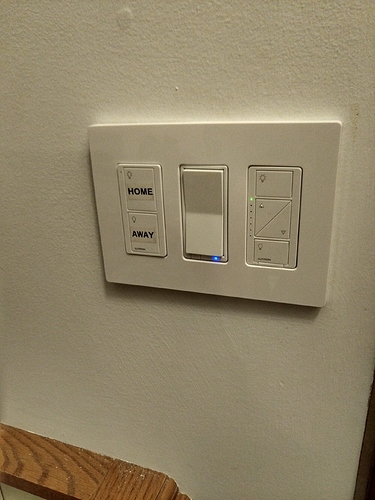 @Christopher I've done a pair of Pico remotes to be a flush-mounted and removable in a place where there were no prior switches, as an easy first step on the project. I drilled out a shallow hole into the drywall for a neodymium magnet. Spackled over the magnet. Then just screwed the wall plate to the drywall. That did not require a Pico bracket; the magnet holds the remote in place, but allows it to be easily removed. I just need to paint the spackle, but haven't gotten around to having it color-matched (and it's behind the remote, so not a priority). Unfortunately, I forgot to take photos

If anyone is interested, I can post detailed step-by-step instructions. If anyone is very interested, I could fake some installation photos, but the only other new-location installs I need are for ceiling fans... Those won't be among the first to be done.

One reason I did this is to have the remote be... a remote, but the bigger reason is with my recessed dumb switch project (or, perhaps as aptly, dumb recessed switch project) it will be easy to know which remotes are what sort - wired switches will have the indicator leds, and all Pico remotes will be removable, whether stuck on the wall or with a dumb switch behind it. I (or some future owner) won't be trying to yank off a Pico directly attached to the wall, only to realize there's nothing behind it.

I will take photos of my project to remove and replace the gang boxes for recessing, and installing flush-mounted Pico remotes over those. @JDRoberts I will be using the Pico brackets to get that done, both for the screw holes it provides, and a frame to attach the magnet (since it will be "floating" over the dumb switch). [edit: But, I will be gluing a magnet to it; otherwise the plastic piece that the Pico slides onto would be in the way of the recessed dumb switch. I'm cutting that piece off.]

I'm thinking, unless anyone objects, of starting a new thread for the complete parts and equipment list, instructions, and photos, once I've actually done one.

@Roguetech, that sounds like a great idea. Would save the hassle of having to remove everything in the future just to swap out remotes or batteries. Those brackets get chewed up by the screws and I can foresee running into issues after one or two moves. Is the hold strong enough to grab the battery through the plastic cover or are you adding a thin metal plate to the back of the remote?

Not necessary to remove screws to change Pico batteries (in 10 years). You can just pull them out slightly at the top and then just slide them right off the bracket. I just use a butter knife to slightly pull out the part of the bracket that holds the remote to get it back in. Works great. Obviously I have not had to replace the batteries on my Pico remotes, nor have I had to do it on my Lutron Connected Bulb remotes for that matter, but every so often I use one of them to reset a Zigbee bulb, and so I just use that trick to pull them out and replace them on the wall without taking the plate off.

With the plastic (and spackle) and small amount of metal in it, I think the neodymium magnet is necessary. Those things are strong enough that if you mess around and get some skin caught between two of them, it hurts. With the neodymium, it's right in the sweet spot - they aren't going to be knocked off accidentally, but they aren't hard to remove. If I need to do this again, I will try nickel magnets, but use two of them (like the Hue Dimmers). Neodymium magnets are almost a dollar a piece but nickle magnets are about 10 cents.

I'm not a big fan of the caseta line of dimmers and switches, but am a huge Lutron fan.

With picos and Lutron wall plates you have a huge selection of aesthetic and physical button options that arent budget busters.

None of my dimmers and switches are Lutron.

I have zwave, zigbee and lan lighting, all run by picos via hubitat.

This type of setup provides a rediculious level of aesthetic consistency and programitic control.

It was @mike.maxwell's quoted post that resulted in my having two black Pico's with a dark brown face plate near my Ecobee3. So far the WAF on this setup has been outstanding and while I continue to work out the kinks in Project One, it's time to define Project Two.

At this point, I'm really looking forward to resolving several lighting control issues (mostly switched not where I want them). Pico remotes will play a major role in that effort.

I'm just wondering what your using for switches/dimmers? And where they are located, since I'm assuming they are not direct replacement for wall switches.

Call me a brave man, all my dimmers and switches are zwave in wall aeon micros (the original ones, not the nanos), these are then covered with picos.

So, did you install all your switches before the Nano came out?

Are the original devices better than the Nano (is there an issue with the Nano)?

The brave part of this is that he is 100% dependent on his Hubitat Elevation hub to turn on and off every light in his house.

Most of us use smart switches that provide local control of the attached devices even if the hub is down.

did you install all your switches before the Nano came out?

No, but I had a budget to work with and was able to get them $20 apiece each less the nanos.
Nothing wrong with the nanos that I know about, other than the switch requiring two line connections which is annoying.

that is the sexiest image on the internet... black picos with chrome wallplates... so nice.

what are you using for dimmers and switches?

Is anyone else having issues with these switches getting stuck on/off. happens every couple of weeks and wife's getting pissed.
Sometimes rapid on/off fixes or have to disconnect power and reconnect...