One minor nightly annoyance largely solved thanks to Echo Speaks giving me a way to feed info programmatically into Alexa in a way Alexa Routines cannot, and tasker:

Maybe just me, but i don't get up at the same time every day and i can't rely on just one alarm. I used to tell Alexa to wake me up 1 hour before i needed to be up, then 15 minutes before, then 5 minutes before then final alarm time. Then I'd repeat the times on my phone alarm to make sure I'd wake up so i don't get fired, and so I'd wake up in the unlikely event a power outage knocks Alexa out. Annoying routine! The cell alarm and the Alexa dowel each kick off different hubitat automations by the way.

Now, i made a tasker screen on my phone: 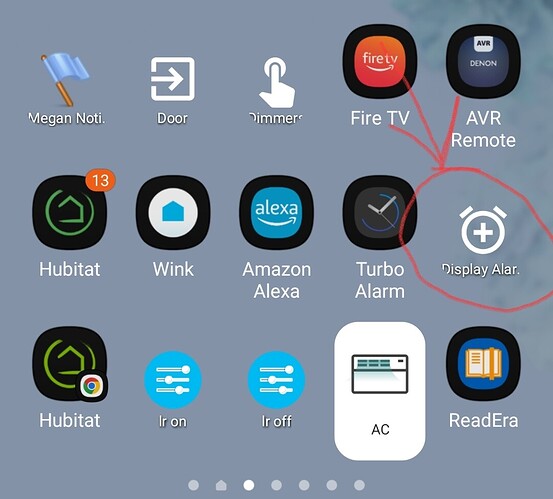 I honestly have no idea what you did, but I'm still very impressed.

Very cool use of Tasker to automate some otherwise tedious manual settings. And how could we not love anything called "Turbo..."

If you are using Google Calendar to store your wake-up times, you may also want to look at the community app/integration Google Calendar, Task, and Reminder Search.

Google Calendar, Task, and Reminder Search integrates Hubitat Elevation with your Google Calendar, Tasks, and Reminders to automate triggers based on items found matching your search criteria: Optionally toggle a child virtual switch Send Push, SMS, and TTS Notifications Run Rule Machine rule actions Special thanks to Mike Nestor and Anthony Pastor, members of the SmartThings Community, who originally created this app and @cometfish for porting their code to work on HE in 2019. I have taken …

Turbo alarm is ace. I do something similar, minus echo speaks