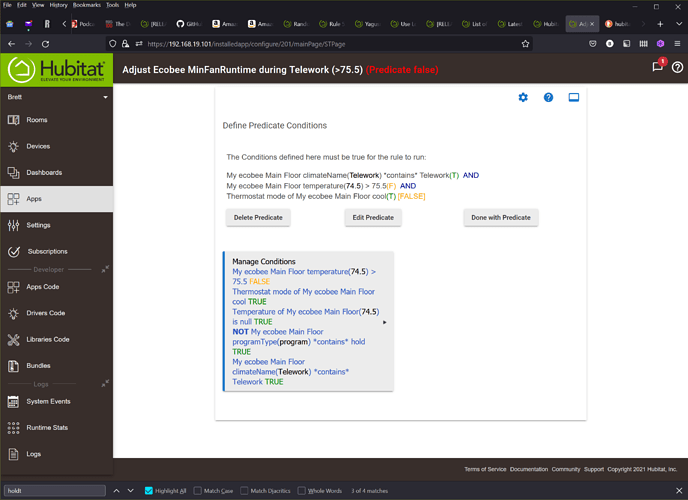 Once I have tweaked my predicate, why do I see fewer entries at the top (The Conditions defined here must be true) as compared to the bottom (Manage Conditions)? I'm clearly doing something wrong when I made adjustments.

The list of conditions under Manage Conditions includes any that you've created. It's just a list you can manage from, including adding, editing, deleting. Only the ones you actually use in the Predicate rule matter.

These are just two separate areas. The "Manage Conditions" box actually doesn't do anything on its own--it's just a "bank" of conditions you've created during the course of making your Rule Actions (or manually added via that screen yourself), but they only do something if they're actually used somewhere in your Rule.

Also, looks like you're using Rule 5.0. FYI, if you create new Rules (and are on at least hub firmware 2.2.9), the first feature has been renamed to "Predicate rule," using "rule" in its older sense (both here and in the rule actions) of "condition or combination of them that will evaluate to a truth value"--an occasional point of momentary confusion for upgraders, and something I'll mention here in case anyone finds it with a search and the terminology no longer matches or you eventually start using 5.1 and find the same.