Hi I am a newbie to Hubitat came over from Iris by way of vera and smartthng I am sorry if y'all thought my post was spam but when it comes to the written word i usually keep it short. I am a cheap redneck from Central Florida that loves technology but some day cant spell my own name so for writing I keep it short, but my wife tells me i am long winded in person. My brother and I are heavenly invested in Iris V1 stuff Last year Lows had a sell (or someone missed priced a lot of it on the website) the V1 pluges were 4 for a $1 and buttons and contact censers were heavy discounted as well , So we bought a lot and the delivered so we have about 300 of these V1 devises. I have been pleased that Hubitat Look to be my new home. With that being said I was just looking around and ran into this post about Wyze cameras (which I am not affiliated with) that i have been looking at for over a year and invested in 6, two for me and some as gifts an have suggested them to many friend. But my cheep side had me concerned to buy till i found this info, as was concerned about buying from a startup company that had no other revue but from $20 and $30 dollar cameras. An I thought this would be a fix for tthouse with cloud concerns. Hope that answers ever-ones concerns about me.

Take a look at this, it is a firmware update where you can convert this to an IP camera. Search How to Use a $20 Wyze Cam with Any RTSP Security System / NVR / DVR ! Wyze Firmware Update and it will be on Lon TV

I wish they offered higher resolution for a bit more money. If they ever update to better cams I'd probably jump on it. But I can get much cams with all these features and more for under or around $100 now. Also, do they allow you to turn off the cloud features? I don't want any of my video going outside my network unless it's direct to me via secure tunnel.

Is there a way to have BI use the camera's onboard triggers such as face detection? I know there's a paid add on for face, but most cameras, even cheap wyze cams have onboard face detect. Some are starting to offer even more such as object detection (cars, dogs, etc) which is even better. And if the answer is yes, then can you still have BI Control send notifications to HE?

Is there a way to have BI use the camera's onboard triggers such as face detection?

Not unless the camera exposes that information somehow (eg. API, webhooks, etc). And as @SmartHomePrimer mentioned, it wouldn't surprise me if some of these companies started offering some of these features as a premium upgrade within their product.

Obviously Wyze has spent a lot of money to get this happening at no cost to the user, with clearly a plan for payed options in the future. I don’t think that they should give that capability to any other third-party software company without charging them a license fee.

ONVIF (camera standard) has support for events via something called Pull Point Subscriptions, but I haven't seen many cameras implement it. And since the motion detection on most cameras suck and Blue Iris's motion detection is generally better, I'd hazard a guess that there hasn't been a ton of demand for it.

Some cameras also have Digital I/O built into the camera for emitting events to third party systems. I'd imagine you'd have to have some way of reading that data into Blue Iris though... and again, Blue Iris motion detection is generally more advanced than what you'd find on most consumer grade cameras. For example, I had an Amcrest ProHD which has this feature (though I've never tried it): 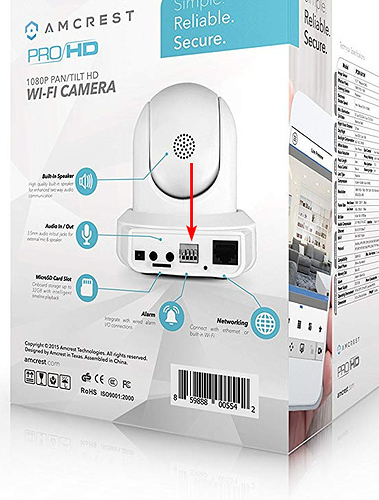 At its core, the Blue Iris motion detection is still primarily pixel based (even though it does have lots of fancy options). It would be really great if Blue Iris included some sort of AI for person / face detection, but I wouldn't expect that to happen in the near term.

That being said, there are companies like Sight Hound that specialize in locally run computer vision. I played with Sight Hound's tech several years back and it was really impressive, but required significant computing power for it to run efficiently. It looks like they're packaging it up with an Intel NUC computer nowadays though, so maybe it's more efficient now. 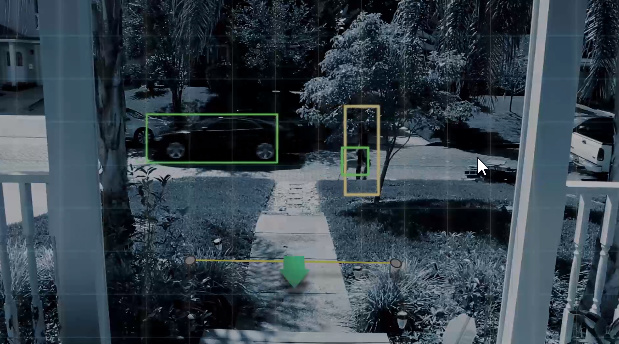 At its core, the Blue Iris motion detection is still primarily pixel based (even though it does have lots of fancy options). It would be really great if Blue Iris included some sort of AI for person / face detection, but I wouldn't expect that to happen in the near term.

Make your cameras smarter by turn on Sentry AI in your Blue Iris software.

Fwiw Im using axxon next with AI people recognition running on a nvidia gpu. It awesome.
Played around with blue iris but lack of AI was a no go. Then had sighthound for 2 years. AI is ok, recognizes dogs, cats, spiders and rats as well. Axxon is a different league in terms of people detection precision. Im only getting an alert on real people now.

I like it so much I became a reseller.

Sounds great, but I can only imagine how expensive that is since they, nor the resellers, list any pricing. I'm guessing it's way out league of home users.

I'm now using the free DeepStack AI server (running on a Pi with an Intel neural stick) with BI. It works exceedingly well for my needs and it's all locally processed so nothing goes out to the cloud. It's not real-time, but analyses snapshots in under a second so good enough for me. You can run it off the same PC as the BI server with GPU acceleration too if you wanted make it simpler. There's threads about different options and setups over at ipcamtalk forums.

I have been using Blue Iris for 9 years. I cannot even imagine anything more powerful or even better. It costs $ 59.- /year. I just want to a say a word about wifi cameras. Don't. Use network cables with a POE router. Things worth doing are worth doing right. Check out https://ipcamtalk.com/. There are many security pros on there, but also many private users who will answer your questions.

I have 4 ip cameras around the outside of my house. I don't have them for security reasons but for capturing the abundant wildlife here. 7 foot alligator(charlie) climbs out of the pond and takes a nap with mouth wide open late afternoons in my backyard maybe once a week.
Sandhill cranes, you can walk right up to them and look them straight into their eyes. They are extremely tame. When I first moved to Florida, I had no idea what they were. They are about 3 1/2 foot tall and have a red cap on their head. So, when I first saw them, I went out back to see if they were tame. To make them comfortable, I stretched a red hand towel over my head. All three approached me, as I approached them. I flapped both arms holding the red towel over my head as if my arms were wings. To my surprise, all three started flapping their wings, flying straight up about 7 to 8 feet and repeated that 5 or 6 times. I figured they were welcoming me into their clan. We have about a dozen wild turkeys every day. We also have deer, squirrels, hawks, and bald eagles and many more.

I'm getting off the subject. I wanted to just share that the power of Blue Iris is amazing, but I also find HUBITAT much better and easier than Vera, which I used maybe 10 years.

The only thing to be aware of when you have a home automation system and multiple IP cameras plus other demanding software on a computer, you'll need to build a system that can handle all of that. I only reboot my system once a week.

I found that the AMD Ryzen 9 5900X with 12 co-processors with watercooled closed system works best for me and is totally Quiet. My cpu never goes higher than 16% and never gets hotter than 41 degrees.
Of course AMD Ryzen 9 5950X** with 16 co-processors is also available.

Forget about the software. I want to hear more about your property 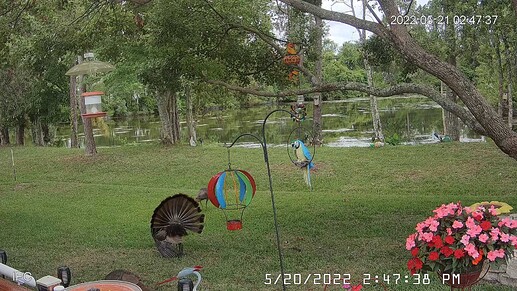 Behind my house. It is not l really a lake, but a 4 foot deep 1 acre drainage overflow basin. The parrot is fake. The bird next to bird bath is something someone made from PCV pipe.

That timestamp at the top right of the image. Could I reach out to you sometime tomorrow afternoon and get the lottery results for tomorrow night?

Never noticed that. Had that camera for several years.

Behind my house. It is not l really a lake, but a 4 foot deep 1 acre drainage overflow basin. The parrot is fake. The bird next to bird bath is something someone made from PCV pipe.

That's one cool backyard you got. The beautiful bird sounds in the morning with all those bird feeders.

That partial view in the bottom left is a bird bath which runs around the clock with 64 quart plastic container used to recirculate the water.
Took me 2 days to build. I have to add 30 drops of anti algae liquid every 2 weeks.
Also have to unscrew the sprinkler head and flush out the small sprinkle holes.
I have all types of birds and squirrels drinking and bathing in this; even were giant black vultures.

I have all types of birds and squirrels drinking and bathing in this; even were giant black vultures

From the looks of that water you might be a prime candidate for an occasional gator.