I've been gradually migrating my home automation to zigbee and zwave devices, from a hybrid system with x10, x10 RF, insteon and UPB. I've been surprised by the lack of particular classes of devices. The one I'm having the most trouble finding is multi-button remotes and controllers. I'm still able to use my old X10 palm pads (16 button), and other small remotes (2,4,6 buttons) that use X10 RF. RIght now I do this via integration with my primary automation software - Home Control Assistant. However HCA will be going away over the next few years. Right now, using these old remotes to turn things on and off via HCA and Hubitat works well. But trying to dim zwave and zigbee devices ( and even UPB) via this mechanism does not work so well. Dim commands have long delays or abrupt jumps or don't work at all. So any light that I need to dim via a remote, I still need to use the older technology to control the lights.

Are there zwave and zigbee remotes out there that are still available and still supported? Please don't tell me about old devices that were great but can't be found anymore. I've seen an old GE zwave remote advertised but as far as I can see, it isn't compatible with Hubitat.

I've seen things like the 4 button Aeotec pad - but those are very expensive and only have 4 buttons.

It seems strange to me that this need is not being addressed.

I prefer not to have to handle this via a phone app for a few reasons - phone isn't always where I am, might not be charged, and I find that the existing HE app takes too many steps to get to dashboards. Sometimes a dedicated hardware remote is just simpler.

My favorite button/remote devices, by far, are Lutron Pico remotes. The remotes themselves are pretty cheap, but they have a relatively high startup cost given that they need at least a Lutron Smart Bridge Pro (the "Pro" part is the key), L-BDGPRO2, to function. A higher-end system, including RA2 offerings, would also work. These are normally well over $100 USD new these days, though perhaps less if you don't mind the secondary market. Picos have a long battery life (says up to 10 years; I have some around 4 years now with no battery changes needed yet), and they don't use a mesh topology like Z-Wave or Zigbee and also use a different frequency, so you'll rarely see complaints about range, delays, etc.

Beyond that, I agree: this has historically been something the Z-Wave and Zigbee space seems to lack in. Some notable exceptions:

I've tried a few others but was never quite as happy with anything besides the Picos.

(If you go all-in on Lutron, you don't need to stop at the remotes, either. They have hardwired keypads, remote keypads, and lots of other possibilities--they'll just cost you, and you have different options depending on what system you have. Not as many with Caseta and the Smart Bridge Pro as with others.)

If I was starting over today, I don't think any of the options I mentioned above are bad, either, though the ZEN34 might be my pick for a battery-powered option. I have at least one of each in various places! (But have I mentioned how the Picos are still my favorite?) I'm sure others will have more ideas, too. Almost all of the above (except Hue) are new since I started with Picos four years ago--back then there were just weird things like the Fibaro button (which I considered too big and expensive) and old Aeon remotes (not sure if we're thinking of the same thing--but they do work if you can still find one!).

Never tried it but Sengled stuff usually works will.

I'm with @bertabcd1234 - Picos are fantastic remotes. I use them in a multitude of ways. There is one specialized zigbee remote that I use for color (RGBW) bulbs. And that is this one from RGBGenie:

Control ZigBee enabled LED bulbs and LED strips from the palm of your hand.  This controller acts as a secondary gateway that once configured, sends ZigBee commands directly to the lighting for an almost instantaneous response.  Latest...

And even thought it is advertised as controlling zigbee bulbs and light strips, once paired to Hubitat, you can use it to control ANY RGBW device that is also paired to Hubitat - for example, LIFX WiFi or iNovelli z-wave+ RGBW light bulbs.

Thanks - but even cost aside, all of these seem like at best you can control 2 devices if dimming is involved. My current X10 palmpad has 16 devices - EACH of which can be dimmed. And I have UPB console keypads with 8 buttons - which can cause actions based on click, double click, hold AND release. It's just unfortunate that I haven't found a reliable bridge solution between those and zwave light dimmers.

So for instance , in bed, if I want to control a couple bedside lamps, ceiling lights, bathroom lights, and trigger a few scenes - I'm looking at several remotes or back to using a phone app.

I think I said this before, but those types of devices aren't popular, and seem to be an outdated way of thinking. There is very little demand for these type of devices. Maybe when things were less automated, or there were fewer (and cheaper) motion/contact sensors available, I could see why things like that palmpad exist.

There are a few devices like this, some were mentioned above. Here is another alternative on the List of Compatible Devices - Hubitat Documentation , although I have no experience with this. https://rgbgenie.com/?product=rgbgenie-4-zone-2-scene-remote-zigbee There are a couple variations of this device (blend of zones and scenes), so maybe one would suit you better than another.

This is my opinion, but to me buttons are things that are rarely used, or used to override an automation for the most part. Don't take this as "you are doing it wrong" because every use case is a bit different. But maybe it is time to rethink how you are using your home automation system? Maybe there are ways to add motion sensors to rooms? Maybe you could have scenes where you push a button and multiple lights dim to a particular level? To me, that is the point of a home automation hub, to not have to touch switches and buttons all the time.

This is my opinion, but to me buttons are things that are rarely used, or used to override an automation for the most part. Don't take this as "you are doing it wrong" because every use case is a bit different. But maybe it is time to rethink how you are using your home automation system? Maybe there are ways to add motion sensors to rooms? Maybe you could have scenes where you push a button and multiple lights dim to a particular level? To me, that is the point of a home automation hub, to not have to touch switches and buttons all the time.

This is an opinion that mirrors mine. In my use case, I just use sensors and modes to control lighting.

Hate to say it but the day of those huge remote type devices is probably over. Get a cheap phone and use that or a tablet. Unlimited buttons, much clearer what each does.

Even with that being said I hardly use anything other than Alexa if its not fully automated. Though fancy looking dashboards are becoming a hobby

even cost aside, all of these seem like at best you can control 2 devices if dimming is involved.

The ZEN32 has 5 buttons with up to 5 taps (plus pus and hold) each, so over 25 button events. You could split that out however you want. (The big button can control a load by default, or it can just be used as a scene controller.) That's a budget option.

Lutron has tons of more expensive keypads with multiple buttons that can do what you want, but most (all?) don't work with Caseta, so you'll need at least some RA2 system (probably not Select...) to work with them. I don't use any of these, but I know some people here do. Here is an overview of most: https://www.lutron.com/TechnicalDocumentLibrary/Keypad_brochure_3673205_EA_LR.pdf

But I'm not familiar with the X10 devices you'd be replacing. These may not be a good match, but they're other options I'm aware of. A tablet running some sort of dashboard solution, as mentioned above, is certainly another option--or automating so you don't need to constantly press buttons.

But I do agree that it is nice to have an easy way to manually control things sometimes.

Kind of the same reason the Harmony remote is gone, replaced by much more powerful, plentiful, and legible phone's.

But I'm not familiar with the X10 devices you'd be replacing.

Apparently these? 1982 style at it's finest. 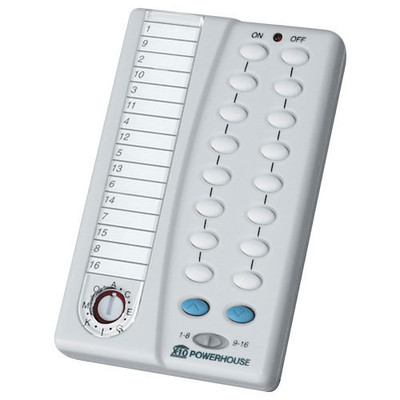 You have to admit they are very dated looking.

ActionTiles or Sharptools on a tablet would allow multiple buttons.

That Kitchler is almost 3x the price of those RGBGenie ones, and has less buttons...

hat Kitchler is almost 3x the price of those RGBGenie ones, and has less buttons...

ya rgbgenie is on backorder and for anyone that has experience and likes minimotes or wants zwave instead of zigbee it is an option.. in fact i said it is pricy.

Appreciate all the input. So let's see - style, yeah the palm pad is certainly dated and unattractive - but cheap and very functional and easily labelled.
Tablets - yes, an option - but pricier and need to be kept charged, and apps updated and new incompatibilities dealt with.
And the truth is - hitting a button is always faster than unlocking a screen , navigating to the right menu or dashboard, etc. Not to say I don't enjoy those - but sometimes, you just want to do something quickly.

I'm a bit surprised by the folks who say you can just do more automation...I have plenty of sensors and I'm happy to program all kinds of algorithms - but I haven't found any sensors or apps that know what mood I'm in or whether I want it brighter or dimmer, overhead light or over my shoulder, etc.

One thing I have not done is used Alexa this way - I've been very hesitant to let the cloud into my home automation. I try to keep it all as local as possible - I do not want Amazon or Google to know my every move, my daily activity, when I go to bed, etc. You're right - if I did that, it would solve a lot of these issues.

The RGBGenie remote has potential though.

I guess you guys haven't watched as many dystopian future movies as I have....couple episodes of Black Mirror and you really want to reconsider opening up your life too much to those folks.