How do I make the button controller?

I did it once before but I couldn't figure it out again. So I copied a previous one but that is what caused my button problems that I previously posted about. 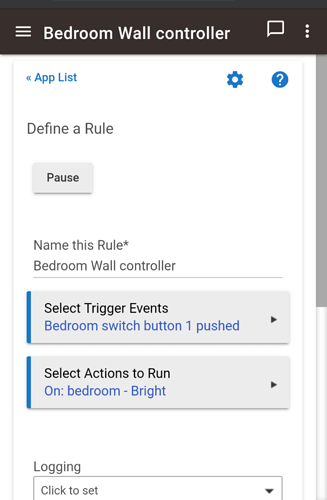 Select 'Button Device' for the trigger in Rule Machine.

Thanks I was selecting button lol

Not possible with the Black series. Red can have all the multi tap programmed you can even have different functions on the multi-tap UP press and DOWN press.

Ive added 3 lzw42 bulbs and they are not behaving properly. It takes up to 5 seconds for the 3 bulbs to recall a scene, when I make changes to the bulb on the driver page its status is not updating, and if I make a color bulb control on my dash it locks up. I added the bulbs on Sunday and the hubitat has the latest FW..
I tried using other drivers and the all behave basically the same

I have modified the inovelli provided drivers for: multi-white lzw41 multi-color lzw42 Allows for changing color and color temperature without the bulb turning on.. Optionally via the preferences..

Hello guy/gals... I am the newest employee of Inovelli and will be helping @ericm with posts here. It will be a few weeks before I am caught up with the new RED product series, most likely after CES.

Any chance of getting a "for dummies" breakdown of how you do this? I've been banging my head on this of an on for a month now. Loaded up on your black Friday special, now I need to get these guys to do what I promised the Mrs they would do...

Looks like I have all the bugs worked out on the Bulb drivers .. LZW41 and LZW42.. If I don't see any bugs today or don't hear anyone report of bugs I will do a pull request to try and get them to merge into the official drivers..

@ericm I issued a github pull request for the bulb drivers

Congratulations. This is great. You and Ericm, great combo. Looking forward to some fantastic drivers.

Any ideas when these might get baked into the official drivers

and 2.1.8 just dropped...so built in Inovelli drivers for the older series! YAY

Are the inovelli device drivers baked into 2.1.8 the same ones Inovelli made available?

If so, I assume that when updates are made to Inovelli's drivers, it will take a while for those to flow down to the built in driver?

for the older series!

And all the new ones except the Red dimmer, LZW31-SN (apparently they weren't given that device--guessing they may have been out of stock for a bit back then). But I'll still probably have to use a custom driver. As usual, Hubitat maxes out at double taps, and I want to use all five. Or at least the outer two or three where I can remember what they do.

Are the inovelli device drivers baked into 2.1.8 the same ones Inovelli made available?

No, they are Hubitat's take. Basically a fuller version of their existing Generic Z-Wave drivers with a few more options for these devices, plus the Set Indicator custom command (an alternative to Inovelli's child devices) for the notification-capable LED devices.

I just really wanted this as I have a bunch and I'm trying to eliminate as many custom drivers/code as possible as I'm one of the people with a hub that eventually slows down and crashes. So the more things I can get that are baked in...the closer I get to calling support and letting them figure it out.

Are the inovelli device drivers baked into 2.1.8 the same ones Inovelli made available

No, these are ground up HE drivers, not ports, not from Inovelli.

Hi, Scott. Glad to have additional support. 2 questions for you.

I want to set up lights that when turned on at the switch have a custom dim level set by hub mode/time of day.

Inovelli merged my LZW41/LZW42 driver changes into the official inovelli GitHub repository.. so if you were using my drivers you can go back to using the official ones...