Hubitat dimmer driver for the IKEA Trådfri Puck. Contribute to joelwetzel/Hubitat-IKEA-Tradfri development by creating an account on GitHub.

This is a driver for the Tradfri Puck. The device has been discontinued, but people have been finding them for really cheap. Here's a pic. The top is magnetic and just pops right off. 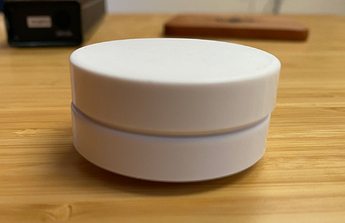 After you join the device to HE and select this driver, run the Configure command.

It has a setting to choose modes: switch vs. dimmer.

The device will act like a switch/dimmer that has no load. You'll want to bind it to a light to use it. Two-way binding is important, so use my Switch Bindings app:

https://github.com/joelwetzel/Hubitat-Switch-Bindings Switch Bindings app for Hubitat An app for Hubitat that binds two (or more) switches/dimmers together. When bound, if either one turns on or off, the binding will make the other one also turn on/off. It will also sync dimmer levels, if any of the devices are dimmers. (It works a lot like a z-wave association, but it happens in the Hubitat hub, so that the hub can know/display the updated device states. Because the Hubitat is local, the bi…

Previous discussions that led to the creation of this driver are in this thread:

Good on you mate.

Just picked up another 6. I really like the smooth dimming feel. Thanks for your time on this driver

Joel.
I finally made it to Ikea today and bought a couple of the Tradfri Dimmers.
If i drop one in the mail to you.....any chance you can see if there is any hope of it working with HE? They are a great deal at 7 bucks,....if anyone can get a driver to work. Cheers
Mac

If you sent one, I would definitely try it out. That said, my hopes are low. There were posts on here (I think from @mike.maxwell) that said this dimmer was using a communication pathway that Hubitat does not support.

i'll pop one in the mail today......its worth the 7 bucks investment even if no success.
you mind sending me your address again please.
Thanks
Mac

IMPORTANT UPDATE: This IKEA Tradfri Puck driver can now be installed from Hubitat Package Manager. This is the best way to make sure you keep up-to-date with bug fixes and new features.

Morning @jwetzel1492
The last time i thought about the tradfri dimmers i believe we kicked off a discussion about the square dimmer ability to integrate into Hubitat. Just seen a post on the facebook Hubitat page and the same question was asked.
I believe you mentioned potentially looking into it. Did you ever have a look?
Personally, the few i have in my drawer and honestly have switched to Picos but if they are useful i can at least offer them to someone
oh.....and used package manager...and updated everything that it detected! Awesome.

I just published a driver update. (And it's on Hubitat Package Manager.)

Now, if the switch is off, and you do a "fade up", it turns on and starts fading up. Previously you had to turn it on, then fade up. This change makes it more like other smart dimmers.