My Echo 4 generation is not working. How I fix this?

You will have to wait until I release the new version

Thank you, we appreciate the hard work you have been putting into this great app.

I have 6 new Echo 4's, 2 Dots and 4 spheres and I was able to get them to work minus the Everywhere (WHA) device - so when I get an announcement around the house, they are not synced.

Here is what I followed, post 1216 above by @wissam.kazan

@tonesto7
Sorry to bring this up again...but the Samsung echo speak thread is closed...why i dont know...
IS there going to be a Echo Speak Lite for Smartthings or is that dead ? Was there some talk about Rboy finishing the work?

With my current workload and the fact that ST will be killing off groovy apps. I’ve decided to focus completely on the Hubitat version.

Seeing as your posting on a Hubitat forum I will assume you have a Hubitat hub. So if there are certain devices keeping you tethered to ST then I recommend running ES on Hubitat and using the third party hub connect between ST and HE.

I’ve asked my former Nest Manager collaborator to give ES a once over and he’s helped me optimize the code for v4. The few simple tweaks have drastically improved performance on HE eliminating the need for a lite mode.
Unfortunately it won’t run on ST due to restrictions in the JVM.

The initial release of v4 won’t be packed with a bunch of new features, those will likely come with v4.1.

I have some big ideas that will open up ES to be the ultimate Alexa integration.

@tonesto7
Thanks for letting me know the death of ES Lite for Smartthings. You might want to post that on the Smartthings site as I'm pretty sure I wasn't the only one waiting : )
Yes, I have a Hubitat and love ES on it.
I was trying to avoid upgrading my Dad as he only has Smartthings. I will look at voicemonkey for him now that I know not to wait.
Thx
Tim

I really considered making a lite version but with recent changes to the code I just can’t justify the time for the effort to be obsolete in less than a year.

Hi all, I just installed 'Echo Speaks' and started to play around with it -- already loving it!

Is there a trick that I'm missing or is that expected behaviour with the new Echo Dot devices? 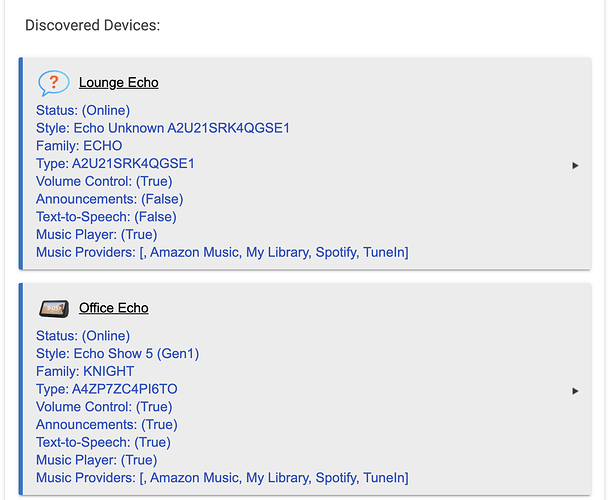 Echo Dot Gen 4 hasn’t been defined to the app yet.

Alright, makes sense. But I suspect this could be added in some future app version releases, i.e. it's a matter of some additional code rather than near-impossible jiggery-pokery?

Have a look at my post 1315 above, I have six echo fours and I use them all the time. The one feature that doesn't work is the everywhere group but that's okay for now until he gets it fixed

That's brilliant! Am I right in thinking that once I update the app code, I then need to delete existing & reinstall the app?

OK, I will be a bit cheeky and also try to get some of your help for another issue that I have that may or may not be 'Echo Speaks' related. [it may be my poor logic-writing skills].

Here it is: Rule Machine & Alexa

Have a look at my post 1315 above, I have six echo fours and I use them all the time. The one feature that doesn't work is the everywhere group but that's okay for now until he gets it fixed

Hmm, I reran the whole thing with the new code and still the same.

to include my device's Type, so A2U21SRK4QGSE1 instead of A3RMGO6LYLH7YN?

EDIT: Never mind -- I answered my own question and it's working -- thanks!

Hey yall, checking in again as its been a few months since this broke for me. My login to amazon expired and i have to re-log in. but when i go through the steps it shows a screen saying i have to enable cookies. Cookies are enabled, i can browse the alexa webpage and amazon just fine in this browser. but that link that generates in app doesn't work. anyone have a fix?

I have been on HE for almost two years now but just recently installed ES. Previously i have just relied on VCs triggering Alexa Routines.

I have read through this thread a (yes all of it) more than once and the some of the linked docs and i still have a couple questions.

Since I am a late adopter, i'm not really interested on moving any RMs into ES Actions at this time.

From reading in this thread, people seem to be able to send Speak commands to up to three echos at the same time without getting a throttling message . I have found even two devices is not 100% guaranteed, so i have defaulted to the playAnnouncementAll command.

Q1. Is there a SpeakAll command? I don't think so but it would be nice to get rid of the Echo chime.

Q2. Is there a a way to play sounds on more than one device or is playSoundByName(sound_name) the only way to do this?

Q3. It appears from the docs that using Echo Actions would make it way easier instead of sequencing RM custom actions (i still haven't figured out how to use SetVolumeAndSpeak) but I haven't found a way to feed ES actions a string. I know RM variable can not be 'seen' from other apps , so I was hoping that ES actions could read a string attribute from a device, but I believe this capability is limited to the %value% of the triggering device. Am I correct?

Again, just getting my feet wet.

@tonesto7 - thank you for the app.

We wanted to get this release out there for you guys to test.

I've changed the file structure some so I recommend you use Hubitat Package Manager and select the new entry for Echo Speaks (Beta) to install the code.

I want to give a big thanks to his @nh.schottfam for all his work on this release.

I have been following the changes/improvements on your develop branch and must say it is working great. I have nine of my echos in use with this app and haven’t had any issues with it since switching back to it on HE from the ST version around late summer/early fall. This is a great app!