My first app everyone. A lot of stuff in here from @mike.maxwell ST app and used @Botched1 dimmer sync app as a base. I really enjoyed using the autoDimmer app by @mike.maxwell for ST, and I wanted that functionality here. I decided to make a new app as a learning experience and also to leverage how Hubitat handles child apps to make the menus a little easier.

The app attempts to match dimmer levels to outside brightness conditions. It takes an illuminance measurement and compares it against a "curve" of illuminance/level settings to determine a desired dimmer level. When a dimmer is turned on it will be set to this level. It can also be set to change dimmer levels as the illuminance changes to keep them in sync.

Multiple child instances can be made to set different lights to different levels, or for different modes. Also they could use different illuminance sensors if you have multiple.

This works for me and it makes it so when the hall lights come on they are always bright enough to help, but not super bright in the middle of the night. This is a different use case than setting brightness by mode in the Motion Lighting app. While that works great for when the dimmers come on via automation, they still come on at whatever there last value was when I ask google to turn them on. This covers anytime the dimmer is turned on.

There is one possible issues that doesn't match my use case, I'm not positive it won't get into a loop with some automations turning on the dimmer and setting the level. I don't think it will, but I have my automations set to simply turn the dimmer on now (let this app set the level). If it does cause issues I might need help from someone else coming up with a way around that since I don't know an easy way to tell what set the dimmer.

Thanks, @crouse.sam, this is just what I was looking for! In combination with my simple motion instance I'm able to set the hall light as I wish.

I'm surprised your app hasn't received a good deal of attention... I guess I'm out of the mainstream AGAIN

I just barely started using your app but I found an error in the logs which occurred when I went back into the child to change the level settings. It says 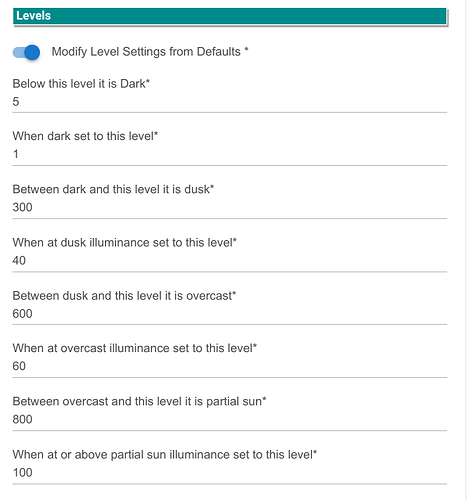 I'm glad someone is using it! I will turn the debug logging back on mine and see if I can get something similar to happen.

Does it still work with the errors?

Yes, it works fine. Thanks for sharing!