Darn. I will get that in tonight. Sorry.

Glad to hear it worked on yours as well. It worked on mine so I figured it would... but further confirmation never hurts. Sorry for all the trouble with the port overrides to begin with.

Absolutely no need to be sorry. It's awesome that you have shared your time and creation with the community! I'm now saving several kWh of unneeded power by shutting down 2 APs and 2 switches every night during sleeping hours. All with the help of your driver. Thanks again!

Are you using PoE powered switches like the Flex? Or are you using the Ubiquiti Plug or Power Strip?

I find those two to be a pretty amazing deal for how reliable they have been. Especially the strip. Control over 6 outlets individually plus a 7th for the USB-C ports? For <$50?! Yes please. Very reasonable especially considering how expensive most Ubiquiti stuff is (never mind the scalper horde)...

All of it works flawlessly! (Unrelated, but I also have a few Kasa HS300 power strips (also ~$50) that djgutheinz's app also controls perfectly.)

The reason I like the Kasa's is because they're also power monitors so they work with my Sense energy monitor AND I can pump that power data from Hubitat into InfluxDB and monitor my power usage over time with Grafana.

You can see in this picture that between about midnight and 7:30am, I power down several unneeded items with Hubitat, the Kasa driver, and your driver.

That is awesome! Thanks for sharing the information. I know many times people wonder "what can I use these drivers for..." and you just gave some pretty interesting AND easy to setup uses.

To be honest I never really gave much thought about my stuff like that... but I could certainly power down an AP or two at night as well. Some of my devices might get a much poorer connection but it is not like any of the ones that NEED a good connection would be operating at that time anyways. Something to give some more thought and planning to.

Im struggling to even get a login to work... 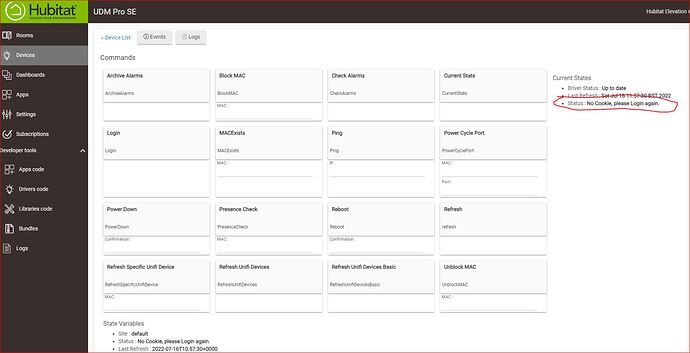 I'm certain the Controller IP/Username/Password is correct, but it doesn't work. I even tried creating a local Admin account just for Hubitat but no joy.

The logs show an exception when performing login, with connection timed out

What am I missing?

Do you have the Unifi site in the preferences? It is usually "default" but if you have set it at some point you need to make sure that is correct as well.

Thanks ill check that

Something that just occurred to me - do the UDM and HE need to be on the same network? I've just got the UDM and I'm playing around with it a bit before I dismantle my existing Netgear-based network. But that means at the moment that my HE is not on the UDM network

They don't have to be on the same network, but you would need to be able to communicate from one to the other - routing through the Netgear router, might be a firewall rule to be adjusted to allow communication across networks (or just between HE/Unifi

I've rearranged my network a little and now the UDM and the HE are on the same network. Login appears to be successful

Since this update, I am getting UnifiConnection - Request Timeout for any attempt to get presence, current stats, RefreshUnifiDevicesBasic, etc.
Login and ping status seem to work?

I don't /think/ my husband changed anything on the unifi side. Any ideas what could be causing this or where I should start to debug?

Edit to update this, husband installed an update and rebooted the unifi system and it seems to be working? I will continue to monitor

Good to hear. Sorry I did not get a chance to reply to the original message, but at least it worked out anyways.

I am getting UnifiConnection - Request Timeout for any attempt to get presence,

I am getting a similar error for presence, but the rest seems to work 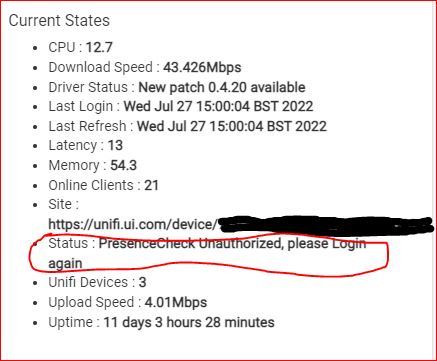 I understood that the driver would create child devices for my Ubiquiti APs, Cameras, etc

Can create a child device for EACH Unifi Device the controller has, allowing additional features and data to be represented within each by enabling "Show Unifi Devices as Children?" feature on the parent device.

but despite having this set, I'm not getting any child devices created

All the drivers and Unifi firmware are up to date

This sounds just like what @forlornlawngnome had. Has there been an update for the controller lately, and did you reboot it after that?

For child devices you also need the respective child drivers on the Hubitat for them to be useful. Including the Presence child driver for presence detection. However, the error is more that it is not even getting to that stage.

Mine never showed failure to login, or anything worrying on that page except the last time it got the presence. The logs showed request timeout for presence, stats, decices,. Basically everything except long and login

Looking at update times, the controller did an update roughly 10 days ago, then I updated the hubitat code and broke things on the 22nd. We then applied updates again yesterday and it worked. I do know they released a new update for unifi just yesterday after we installed one so you might have new uodates