Presence still not right on Android

Please be sure to provide the app version and build number every time when providing feedback on the Android Mobile App. It helps us tremendously to investigate the issue reported.

Version 1.28 build 41. Some days it works flawlessly. Other days not so much. It seems departure works reliably most of the time. Arrival sometimes fires 10-30 minutes or longer after arriving. I have rebooted my phone, cleared the cache, uninstalled/reinstalled the app.

I have location on and battery to not optimize.

I have to say, I have never been happy with mobile presence on any other solution I've tried, and I've tried a LOT of them. The Hubitat mobile app is the first one that works with any reliability that doesn't gobble up half my battery capacity. Solve the logging out on update issue and it'll be perfect.

I will say, I only use it for arriving home and i almost always have my phone plugged into my car to use Android Auto and have Waze up for nav. So, GPS is 100% active at the time. Doing that naturally updates your location more frequently than your android will on its own. 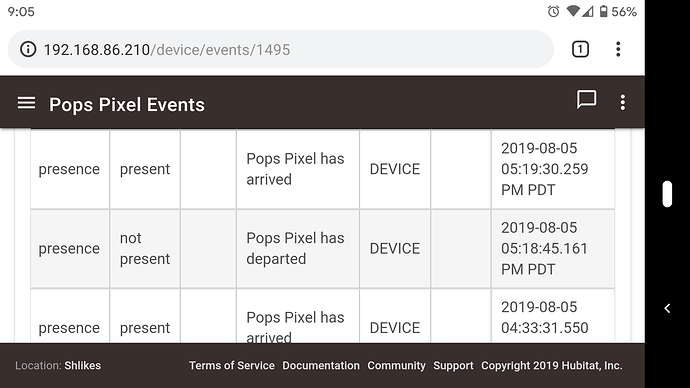 Our presence had been working quite well on both mine and my wifes phone till a couple days ago. My phone is still very responsive. But my wifes is about 5 to 6 MINUTES late before HE sees it. Life 360 still seems to be ok, so the phone is seeing the location it's just not getting to HE.

Both phones are identical. Pixel 3A's. Both running Android 9. Both have same settings as far as battery, etc. Location circle in the apps are within a few feet of each other. Hard to get them exact.

Running the Beta app on both.

My wifes phone showed her coming home at 4:21 (we were traveling together) and nothing after that

Sorry you are having issues, but you are running a beta version of Android and we can not support beta versions, and will only provide support after they are released to the general public.

With that said, we are looking at reports of when the mobile device stops reporting GPS location, or randomly reports a massive change in location and will disregard those states.

When reporting issues, it helps to provide the settings, Debug Information screen and if it reports any errors, information that might be helpful in troubleshooting the problem.

Sorry you are having issues, but you are running a beta version of Android and we can not support beta versions, and will only provide support after they are released to the general public.

2 things, while I respect that, trust you are aware that Q will be released in a couple months, if the issue isn't looked at until it's released, IMO that's too late. Now is the time to start looking at it since this is the 6th beta release, very stable.

And, I have been reporting this and other issues while on Pie (Public release) since the mobile app was released. I only upgraded to Q about 2 weeks ago and nothing new has shown up since. My wife is still running Pie and is experiencing issues, just like many others who are reporting it here.

Thanks for the feedback

The only way to know if it's a phone issue or an app issue is to have another app also checking your presence or to check if manually updating your location makes you immediately arrive home.

I've found, that unless I'm in GPS mode (navigating with Waze or Google Maps) my phone's location services go into sleep mode to conserve battery. Unless I do something to kick it out of sleep, my location can take forever to wake up.

So, next time you don't think your phone is updating your location, open Google maps. If you instantly get an updated location and arrive home, it was your phone. Not the Hubitat app.

L360 is accurate and consistent, even on Q.

In this case, yesterday, I was drinking beer with family and friends when HE said I left and came back 6 mins later. It does sometimes miss me arriving or leaving and other times, it leaves/arrives all on it's own

Mine has been very consistent.And so has my wifes. Running Android 9, whatever letter that is, on Pixel phones. Had no problems for some time. I am using the Hubitat beta version of the app.

Although the app has been better lately, today i noticed presence on my Pixel 2 XL on Pie showed not present and then back to present 3 times why I was home the entire time. Previous couple of days though seemed to be okay, so not sure what happened.

I have disabled power saving for the app and I am also running the beta app.

How big is your circle? Mine is about 450 foot radius. So when were in the circle, we are well in it. Reason it's that big is mainly due to the way our road curves around.

Mine and the wifes usually react within about 30 seconds of each other.

How big is your circle? Mine is about 450 foot radius. So when were in the circle, we are well in it. Reason it's that big is mainly due to the way our road curves around.

Came home at about 5:05pm, didn't detect me. I opened the mobile app, selected the dashboard and then it switched to cloud (I was sitting in my driveway with a geofence that is over 800 ft)

L360 was no better today, in fact it never detected me leaving or coming home today

So what to do?

I used to have issues with it showing I've left when I was still home but I haven't had that problem in a very long time. I have an automation that arms the house and turns the AC off when no one is present which worked flawlessly when I was the only presence. I've set it up on my wife's phone but for her it only works sometimes, other times she has to open the app for it to work.

I've done all the troubleshooting and setting the app to not optimized etc. We have the same exact phone so not sure why it's doing that.

I was having similar issue, it seemed that unless another application like my Arlo presence, or Life360 1st triggered a GPS update the Hubitat app wouldn't update unless I opened it 1st. Last week I enrolled in the Beta program, disconnected my Life360 to test the HE app. It immediately was the best I have ever experienced with any presence to date; almost 6 months with HE. HE app initiates and updates my presence and runs the rules I have created before ANY of the others even process. I really don't know exactly what the difference is but I am SO HAPPY!

My P2 running X no longer sends notifications, don't know yet about presence

Ended up removing the beta app v1.3, reinstalled and still no luck