Possible to record values in a Google Sheet?

I want to record temperature and humidity from a few sensors into a spreadsheet every time it's reported so I can make some graphs. How can I do this? I thought I might be able to with the Google Home app, but that just seems to allow Google Home access to my apps, but not allow Hubitat access to Google Assistant.

Using GA, it's easy to record something like this. I use it to track rain for watering purposes. When I check the rain gauge, I just say "Okay Google. It rained X inches" where X is a number and it records the value in a spreadsheet for me. I was hoping to do something similar and maybe just pass the command "The temperature in the bathroom is X degrees."

NodeRED could do this with ease, but not sure if you're comfortable with NodeRED ? It would take a bit of work to create the flows.

I use IFTTT to record daily statistics from all my power monitoring devices into Google Sheets, and that works fine. However, the frequency of your temp/humidity reports would possibly make that IFTTT a clunky solution.

I don't see any triggers in IFTTT for Hubitat that would work for this.

Yes, this works, and I just did this the other day as a test. You can head over here to get more information: apps/googleSheetsLogging at master · cschwer/apps · GitHub

I don't see any triggers in IFTTT for Hubitat that would work for this.

You need to use the Maker (formerly WebHooks) trigger. Then do a post from Hubitat. If you think it is practical to pursue this route, I can post some more detail later.

Now that is a good suggestion and achievable for many more people than my NodeRED suggestion.

OK, details in case you are interested. I have global variables DevicekWh and DeviceRunTime where I track that day's energy and number of minutes running. At end of each day ..

In IFTTT, I trigger on Maker as follows: 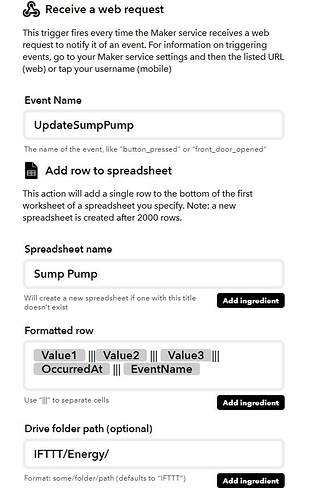 and the results are spreadsheets for each device like this: 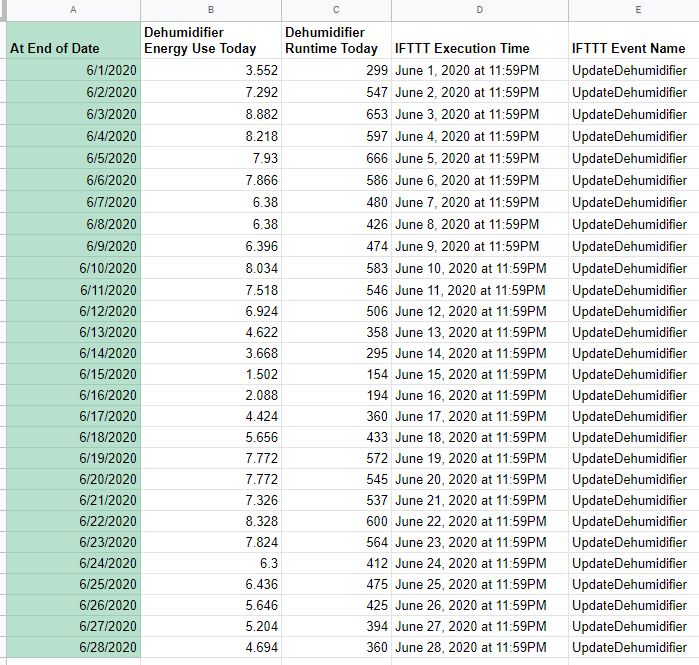 I have delays between POSTs because it seems that IFTTT ignores subsequent posts if they come in too rapidly. I'd like to be able to put all values in the same spreadsheet, but haven't figured out how to do more than three in one IFTTT action.

I got it set up, though I'm not entirely sure it's working. One thing to sort out is how to not send duplicates. I'm fairly new to creating rules in RM, so here's what I need to do.

My sensor (Zooz 4-in-1) will report everything every 15 minutes. It will individually report humidity or temperature if it increases or decreases past a certain threshhold (I think every 2% and 1 degree C). Here's my rule 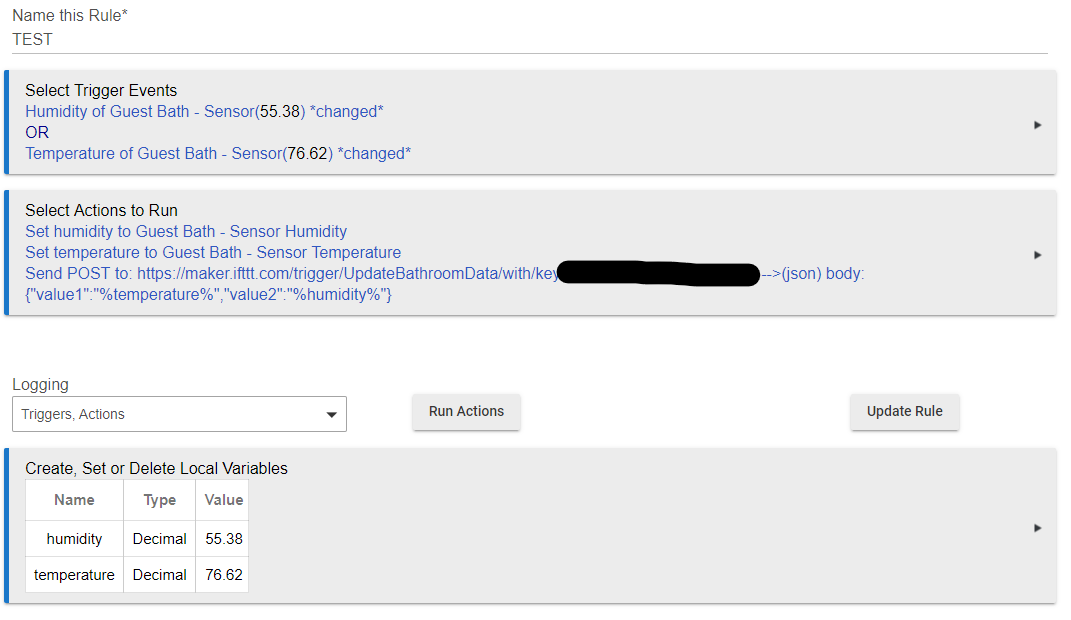 Unfortunately, it seems to trigger twice immediately when the device reports everything at the 15 minute mark.

So the POST it does will send the same values twice in a row immediately. How can I tell my rule to not run if it's already run in, let's say the last 5 seconds?

On a side note, sending the POST seems to have done nothing and there is nothing created in my IFTTT folder in Google Drive, but I want to sort out the duplication issue first.

I don't have that particular sensor, but I do have the Zooz power monitor. In it, they give you the option of reports based on times or thresholds of change. If you do have similar options in your sensor, I'd set the time-based options to No Reports, and the thresholds so you are notified when it changes by a full degree, for example. Then you don't have to have that intelligence in the rule.

IFTTT can be a little pesky to debug. I assume you have Google Sheets connected correctly? I would suggest testing each side of the IFTTT independently. Set up a test one like if Hubitat sees a switch turn on, it will write some data without variables to a spreadsheet. And similarly, have the Maker trigger turn on a light or something.

If I remember correctly, there are a bunch of little things like commas in the wrong place, or missing value that would cause it to appear to run but not actually do anything. I will say that the example I posted is an example of one that works, though again I remember it being really picky to set up.

One last thing on the duplicate values .. you could ignore that problem for now and use the spreadsheet function to delete duplicate observations.

IFTTT can be a little pesky to debug. I assume you have Google Sheets connected correctly?

Yes, I do. I have IFTTT recording other things in Google Sheets. If I put in my Maker URL into the browser and go to it, it takes me to a page to send a test. I put in test values and hit the Test It button but even that doesn't work. So I dunno what's going on. Maker says the test is successful, but nothing happens in my Drive.

If you do have similar options in your sensor

I don't. I can only adjust the reporting thresholds. Though... looking at the log it doesn't actually seem to be updating every 15 minutes like I thought it did. I see an update at 12:58pm today but the next one isn't until 1:40pm and it reports all the values. I'm wondering if I can just perform the check for a change on a single value and still be fine. Or... maybe that's just over complicating things. Maybe I can just send the values every 10 - 15 minutes and who cares if the values are the same. If I'm wanting to see temperature/humidity over time, that might be the best way to compare different days.

Maker says the test is successful, but nothing happens in my Drive.

Sorry I don't have any good suggestions. I did observe that while looking at the events in IFTTT, I saw the Check Now button and clicked it. Nothing happened in the spreadsheet. Probably because the applet expects values to pass and they aren't there. Something like that.

And it came back with "Congratuations ..." in the browser window, and did add a line to my spreadsheet.

I think the issue was that IFTTT didn't have access to my Google account. After I deauthenticated and reauthenticated it seems to be working now.

Though, I think the method @Kulfsson listed would work well too and doesn't rely on IFTTT and would solve your problem of needing multiple posts.