Plans for a native app?

While it is great that there is a basic app with dashboards. The app seems to be an embedded web app which makes the responsiveness slow.(Has to make remote calls to load each page). I created a top level dashboard with sub dashboards to organize the widgets which helps but loading of each dashboard is still quite slow. Even clicking on a dashboard widget takes a while to update.

I assume this is just the first quick version of the mobile app, so is there plans to create a native phone app (I'm using Iphone) that will be really fast at loading and switching dashboards ?

Even though Smartthings app was not the best it still was much faster at navigating to the widget you want, and clicking on a widget was much faster. This does make a difference for like enabling your alarm system, or turning if off when someone sets it off, controlling some lights etc.

but loading of each dashboard is still quite slow.

Yup my main dashboard just has about 6 devices/widgets then links to other dashboards.
Tried to get it as fast as I could but still limited. Even when you click on a widget takes a little while before the status gets updated.

I assume this is due to not just making data calls to the remote server but also send UI rendered views. If it was a native app the data would be much smaller and be a lot more snappy.

So just curious on what is the roadmap for the phone app ? And if this is already in the works ?

I think you might be talking about two different things: the mobile app provides more than just Dashboard access (notably presence and notifications), but the Dashboards are indeed just web pages. I don't see that changing--that's the way they've always been (long before the mobile app, which had long been poised as one way that would provide easier access to them) and that is what pretty much any third-party dashboard solution is, too (SharpTools, HousePanel, the former SmartTiles, ActionTiles on ST, etc.--and even Lovelace on Home Assistant, and I'm sure I could go on). You can also get to them without the mobile app (under Apps in the admin UI, find Hubitat Dashboard and then the "child app" for your particular Dashboard; when you click in here, you should find links for local/LAN and remote/cloud access; in the "old days" before the mobile app, it was often suggested you just bookmark one of these or put it on your homescreen, a trick that still works for direct access to that particular Dashboard).

While the Dashboards are indeed webpages, I'm not sure about the rest of the mobile app. It appears to be somewhat native, but my guess is that it was created with one of those "cross-platform mobile app creator" frameworks, which gives some result on many platforms but lackluster results on most. I haven't used the Android app but can say that the iOS app may indeed benefit from a native "main" UI--there are odd issues with scrolling, things getting cut off or covered up, and whatnot, likely the fault of this framework more than Hubitat themselves. Presence also goes wonky once in a while (I have to either launch the app or launch it and log out and log back in maybe every few weeks), which again might be some weakness in this framework or perhaps iOS oddities (location does seem to be tricky for many apps, but I rarely notice others misbehaving this often). The app seems pretty simple and my guess is that the relatively small amount of effort it might take to maintain a truly native app for the only two platforms that appear to be currently supported (iOS and Android) would create far greater benefits in terms of user experience (and lack of wonkyness) and make it worth their effort.

In the meantime, I used Hubitat for a long time without it, and it still does what I need most of the time, and if time/resources are indeed a constraint I'd rather have that effort put into the core platform. But it's still on my wishlist.

But you have only selected the devices you want to show and NOT selected "Use all your devices". 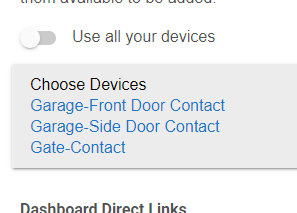 I agree. The app does work, the Geofence, and notifications work (most of the time) but an app that caches more info so when you click a trigger would be nice, and a little more responsive.

The smart things app would just come up, with cached info, and then when you selected something, it would just send the command out.

but I don't see it happening. I was thinking of making an app that would just send out API commands and house all local assets local to the phone, but I don't have that kind of skill yet.